If you attended the 2019 Sundance Film Festival, you probably saw it everywhere: that little red, white, and blue patch embroidered with the words “Canada Goose Arctic Program.” Perhaps that’s to be expected, given that the brand has been a sponsor of the festival since 2012. But Canada Goose’s support of independent film becomes especially meaningful once you consider the label’s position in the wider entertainment industry. Follow those festival-goers off the mountain and onto any film set, and you’ll find that Canada Goose is practically an unofficial uniform of the film world.

Nowadays, the sight of Daniel Radcliffe or Mindy Kaling sporting an Arctic Program badge wouldn’t raise an eyebrow, but the brand isn’t exactly a Hollywood native. Founded in 1957 under the name Metro Sportswear, the company initially focused on outfitting park rangers, Arctic bush pilots, and other working men and women whose jobs took them into extreme temperatures. Over time, the coats found their way onto film and TV sets by virtue of one key fact: they got the job done.

“If we’re shooting in the snow and I have to get people up to the top of a mountain, I need to figure out what boots they’re gonna wear off camera that keeps them happy and ready to work by the time they get there,” says costume designer Mitchell Travers, whose credits range from indie darlings like Eighth Grade to blockbusters like Ocean’s 8. “I remember just sort of running through what was available in the market at that time to keep people dry, comfortable, and warm for 12- to 16-hour days on set. I came across Canada Goose, and I started realizing, okay, this works for pretty much everything I needed to have happen.”

It certainly didn’t hurt that, as Canada Goose became more of an on-set staple, stars like Emma Stone and Kate Upton began to gravitate toward the brand. “What happened was the talent then saw the crew wearing this product, and they would borrow it for breaks, and that’s how talent got introduced to it,” explains Penny Brook, the company’s Vice President of Marketing. But rather than shifting its marketing strategy to cater to the new wave of celebrity customers, the company expanded upon its accidental foothold in the entertainment industry by doing, well, just the opposite. “I find that if I had certain names that I could attach to a project, all of a sudden FedEx boxes were just rolling in with things that [different brands] wanted to have our stars photographed in,” says Travers. “But there wasn’t the same connection towards what the product was actually doing for the human being wearing it.” 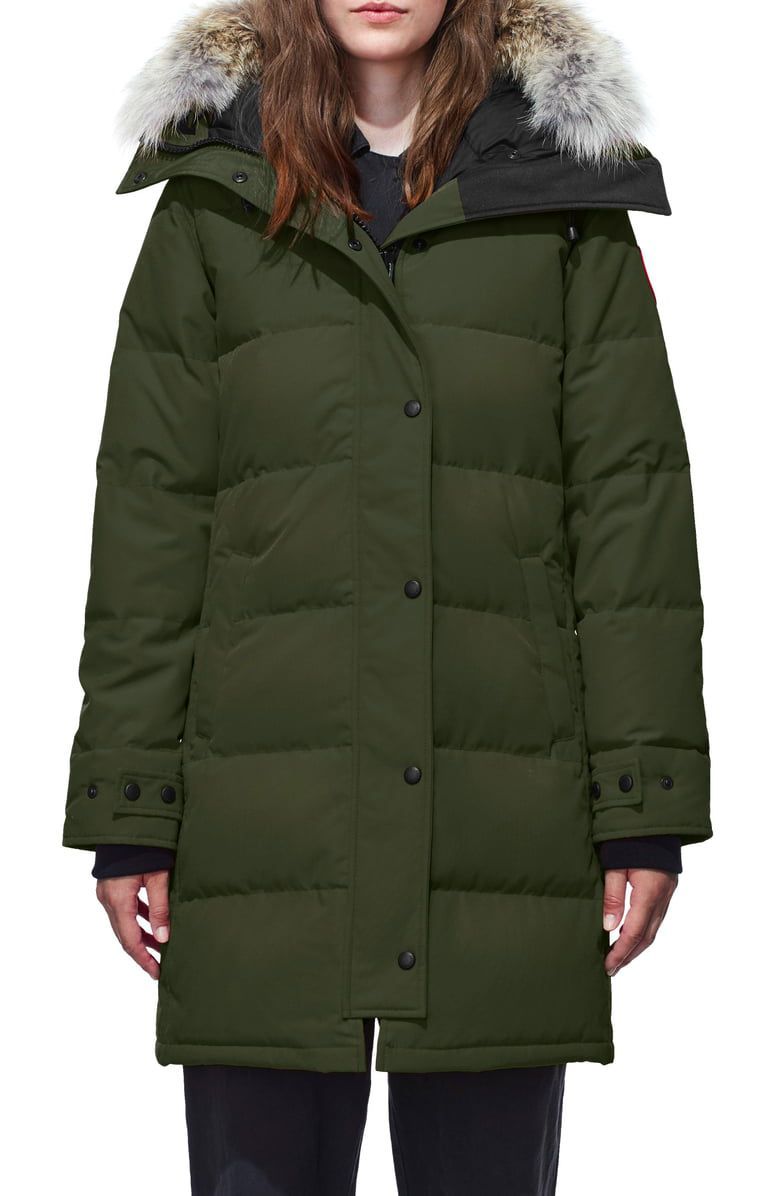 Canada Goose’s response to its rising profile has been to treat Hollywood just like the other labor-intensive industries it’s catered to over the years: by responding to workers’ needs. “They seemed to understand the way a film crew works in a way that a lot of other brands hadn’t,” Travers continues. “They’ve asked me, ‘How is [the product] working? Are there certain things we could add to coats in the future that would make things easier for the people wearing them?’” In other words, in a town that often prioritizes style over substance, Canada Goose has risen to the top—and stayed there—by focusing on being the best resource available.

A key side effect of the brand’s dominance in the entertainment world is its meaningful initiatives in support of independent film. In addition to its partnership with Sundance, the brand is also a sponsor of the Toronto International Film Festival, as well as an active presence on the sets of indie films like Nisha Ganatra’s Late Night and Joanna Hogg’s The Souvenir, both of which premiered at Sundance this year. “As a brand we are very humbled by the commission we’ve been given by the film industry to play a role, and we are extremely aware of that,” says Brook. From Canada Goose’s perspective, that role comes with responsibilities—such as “investing back into that industry, whether it’s the sponsorship of awards, emerging talent at festivals, or whether it’s supporting people who are trying to get their first break.” Travers confirms the brand has done so with aplomb. “It really hasn’t mattered to Canada Goose which project I was talking about or which stars I was talking about. They’ve supported me on projects both of colossal Ocean’s 8-level scale and they’ve supported me on some of my smaller features with lesser-known stars because they understood that I wasn’t trying to promote a brand for any reason other than the fact that it was working.”

Ultimately, says Brook, the brand sees its support of independent film as both an honor and an obligation: “I think it’s really important from a social responsibility perspective. We’re a storytelling brand. So the stories that we have the privilege to be able to tell, or our ability to just be a platform for others to use to tell their stories—it’s fantastic.”