LeBron James may be the GOAT of the NBA, but his Hollywood titles have been a little harder to sink. Since starting his production company SpringHill in 2020 with Maverick Carter, James has served as executive producer on a number of projects, including 2021’s high-profile but notoriously beleaguered production of “Space Jam: A New Legacy.” While that film earned James a Razzie Award for Worst Actor, he has no intention of slowing down.

Undaunted by the poor “Space Jam” reception, James partnered with Warner Bros. for yet another reboot/sequel to a beloved ’90s film, though this time with a significantly lower profile. Starring Jacob Latimore and Tosin Cole as two broke best friends desperate to throw an party so epic it changes the trajectory of their lives, “House Party” is a gussied up reboot of Reginald Hudlin’s 1990 cult classic.

Though Latimore and Cole have enough charisma to skate by, the movie lacks the originality and scrappiness of its inspiration. Trading on celebrity cameos and impressive set pieces, “House Party” feels like an uneven amalgam of so many studio comedies that came before it. That may be more a function of the system than the individual players, but an unimaginative story without a standout comic performance is unlikely to make waves. Directed by commercial and music video impresario Calmatic in his feature debut, “House Party” feels like a case of too many cooks in the kitchen.

“This is Los Angeles. A city where a party can change your life,” straight man Kevin (Latimore) explains as the movie opens to the beat of 2Pac’s “California Love.” As he packs up his young daughter to take her to her mother’s house, his parents remind him he needs to get a real job before they sell their home and retire to Florida. Meanwhile, his fun-loving best friend Damon (Cole) has a similar mandate to make rent instead of worrying about his Instagram follower count. An aspiring party promoter, he’s just been kicked off his latest event by an imposing trio of local doofuses. 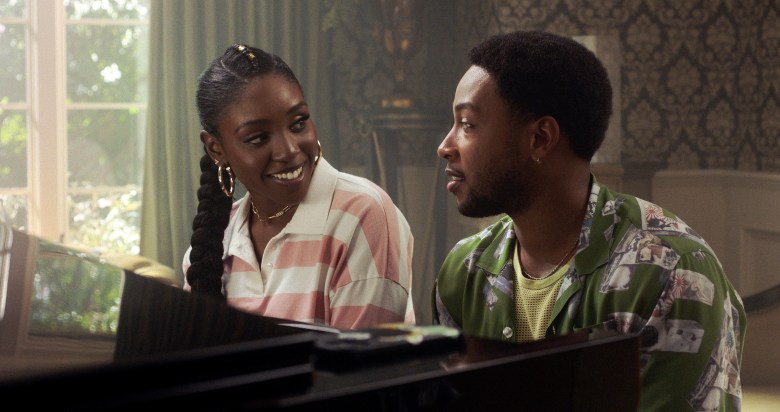 When their cleaning service job sends them to an anonymous glitzy mansion, Damon is ready to spark up like usual. Reeling from the news that they are both getting fired for smoking on the job, Kevin isn’t in the mood. But while poking around the “off limits” section of the massive dwelling, Damon discovers a secret trophy room full of priceless NBA memorabilia. It isn’t until he spies the championship ring with “James” emblazoned on the side that it finally dawns on him whose house they’re cleaning.

Jacob fears that if he can’t pay for his daughter’s pre-school he may lose custody, causing Damon to hatch a plan: What if they throw a party in LeBron’s house?

Though their logic is sketchy, his calendar informs them the star is on a meditation retreat. Somehow, they access his contacts and invite all of his famous friends by posing as his assistants, and build buzz for the event by promising many celeb appearances. They’ll charge an exorbitant entry fee for all the plebes, earning enough money for pre-school and a professional clean-up afterwards.

The build-up to the party has an energetic momentum, as the audience enjoys the vicarious pleasure of seeing the guys have the run of LeBron’s house. Though the sentiment is the same, Damon owns the delivery of his unique exclamation for the moment he finds LeBron’s car collection: “Sweet chunky Black baby Jesus.”

The script, by Stephen Glover (“Atlanta”) and Jamal Olori, contains many of these outlandish asides, hinting at the potential of more subversive early drafts. Standouts include “I’ve seen better cock rings than NBA championship rings” and LeBron’s (playing himself) deadpan delivery of, “It only took me one week to reach enlightenment. I’m the GOAT.” A sidebar to the Illuminati headquarters with Kid Cudi also yields ridiculous results, though as the one detour from the otherwise single setting, the scene feels oddly out of step with the rest of the movie.

And that’s before LeBron returns home early to find the likes of Snoop Dogg, Kid Cudi, Lil Wayne, and a host of random strangers trashing his place. Through his characteristic bravado, Damon challenges LeBron to a game of one-on-one in the hopes of saving himself from jail. His appeals to LeBron’s better nature fall on deaf ears (though the epilogue informs us that he only ends up serving four months).

The celebrity cameos may be fun for awhile, but ultimately Latimore and Cole don’t feel like big enough stars to carry the whole uneven adventure. Comedian DC Young Fly steals the wacky limelight as Vic, their friend and DJ whose set goes off the rails as soon as he isn’t sober. Cole forces the funny man energy, vacillating between smooth and cartoonish, which gets grating after awhile. Latimore stands out as the one with leading man presence, but this emerging talent deserves better material than this limp would-be party.