When Mike Tristano is working on a film or television production, his guns never leave his line of sight. The armorer, who has lent his decades of weapons expertise to “The Purge” and hundreds of other productions, follows strict safety protocols on sets to ensure that the guns being used cannot harm the cast or crew he works with.

“The guns that we use on movie sets are only used for movies, not for target practice, plinking, or anything else,” Tristano told IndieWire in an interview. “Everything is always unloaded. It goes from our safes at the shop, to a truck, to the set. On the set, all the guns are open. The loading gate is open, the cylinder is set so it can be rotated and the ammo — and by that I mean blanks — are very visible. There’s a very visible difference between blanks and live rounds. Only the armorer hands guns to actors and we give actors a firing point so the gun is never pointed at cast, crew, an animal, or anyone else. We treat everything like it is dangerous, which is a way to keep things safe.”

Experienced armorers who handle all guns and ammunition on sets and follow rigorous safety guidelines are why shooting accidents on film and television sets are so rare. On the set of “Rust,” which saw star and producer Alec Baldwin accidentally fire a prop gun containing an actual bullet that killed cinematographer Halyna Hutchins, the armorer was 24-year-old Hannah Reed-Gutierrez; “Rust” was her second film credit.

Fatal shootings on film and television productions are rare: Prior to “Rust,” actor Brandon Lee’s death on the set of “The Crow” in 1993 was the last recorded accidental death by a prop gun on a film set. While professional opinions differ on the value of using guns on set, experts who spoke to IndieWire agreed: “Rust” was unusual for its lack of safety protocols.

“As a general rule we don’t have live rounds on set unless you’re shooting something for the Military Channel specifically at a range, or for the Discovery Channel, or something educational,” said armorer Joey Dillon, whose credits include “Westworld” and “Barry.” “But on a Western film, and all the films I’ve done, you wouldn’t have live rounds on set. There’s a lot of knee-jerk reactions that I don’t feel are appropriate, such as people getting rid of blanks on set before we found out the ‘Rust’ shooting was with a live round. Blanks can be deadly if you put it point blank to your temple, but it takes an awful lot otherwise to kill.” 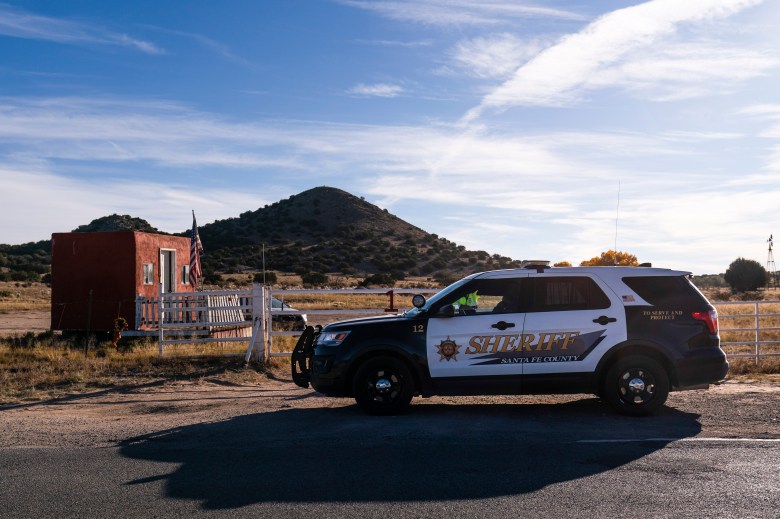 A Santa Fe County Sheriff’s deputy briefly talks with a security guard at the entrance to the Bonanza Creek Ranch in Santa Fe, N.M., Monday, Oct. 25, 2021

Although special effects have improved, Tristano said real guns provide authenticity for actors as well as the scene. “VFX doesn’t look that good if you know what real gunshots look like,” he said. “It really inhibits the actors because actors want something in the hand that’s going to fire because it will help their performance. VFX will never look as good as firing blanks. It’s like doing explosions in VFX as opposed to having a pyrotechnician on set. Directors want practical effects and it’s hard to see how something will look in post-production.”

Dillon noted that many real guns have not been reproduced as prop guns for use in film and television productions, although it’s possible that their barrels could be welded or otherwise modified so they cannot shoot. And while armorers are not required to be licensed in New Mexico, Tristano said California requires its armorers to hold multiple licenses.

Alex Ferrari, a filmmaker and VFX supervisor who hosts the Indie Film Hustle podcast, noted that affordable special effects are leading some creators to phase out guns.

“VFX doesn’t cost much more than having an armorer on set for three or four weeks and renting those guns,” he said. “With visual effects, even on the lowest budgets, you do not need a practical gun capable of firing blanks. Any VFX compositor worth his weight will know how to do muzzle flashes. There are tons of packages of muzzle flashes shot out of real guns that you can use in a comping environment. To make it realistic, you have a muzzle flash pop out for a frame — you don’t even need video stills — when the frame comes out you have to light the face of the actor. That little aspect of adding luminescence to the actor’s face adds the realistic effect to the shot. You can even do it in Adobe Premiere and After Effects. You don’t need big VFX software. Muzzle flashes are some of the easiest things to do at this point in the game.”

Dillon said even on productions where gunshots are produced via special effects, weapons experts would still play an important role on sets.

“Sometimes, practical effects just look better than CGI, especially if the gun has to eject the brass like modern guns do,” Dillon said. “But (special effects) are getting so good, it’s difficult to tell the difference. Also, it does give a better reaction for everybody, including the actors and actresses, who get a better respect for the gun, knowing it’s hot and went off, which shows in their characters. A lot of people would say, ‘Well, they’re actors. They should just act better and there shouldn’t be a blank involved.’ I’m open-minded to that, but there will always be a need for a gun expert to show that a gun can’t be loaded or fired. There will always be a need for my expertise, perhaps even more so to get people to fake reactions better because I know how it really works.”