Hollyoaks is lining up baby drama for young couple Lily Drinkwell and Prince McQueen as they continue to clash next week.

Upcoming scenes will see Lily (Lauren McQueen) suspect that she could be pregnant, throwing her temperamental relationship with Prince into further chaos.

Fans will have to wait and see how Prince reacts to Lily’s baby bombshell, but things grow even more complicated for the pair when his family catch him buying a pregnancy test.

As Prince heads out to the Price Slice to buy a test for Lily, he’s left in an awkward predicament when he bumps into Myra and Goldie in the shop. 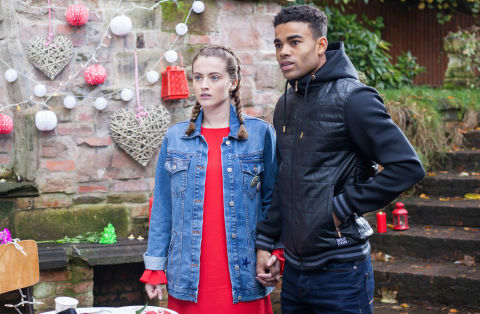 When the nosy pair go mooching through Prince’s basket, they are shocked to spot a pregnancy test in there and immediately start questioning him on what’s going on.

Although Prince begs them to keep quiet about their discovery, we all know that’s a difficult task for a McQueen – meaning it’s only a matter of time before word gets back to Lily.

And sure enough, it leaves Lily and Prince at loggerheads again –only this time, it looks like it’s really serious.

After Lily refers to Prince as just “a window cleaner” amid another almighty row, he is unable to forgive her for her harsh words and takes drastic action. Is it all over for Prince and Lily?