In its first season, The Handmaid’s Tale slowly, skin-crawlingly revealed a dystopian America now named Gilead, in which child-bearing women were held as slaves, stripped of everything including their names.

By the end of ten gripping, grim episodes, handmaid Offred (Elisabeth Moss) – real name June – had been smuggled into the back of a van, away from her commander, Fred (Joseph Fiennes) and his wife Serena Joy (Yvonne Strahovski).

As the van doors closed, the hope – for June and for the audience – was that she had been rescued from servitude by her lover Nick (Max Minghella) and was being taken to safety in Canada.

Is June really free at last, or has she been captured and taken away for punishment? That was the question that the season finale – and Margaret Atwood’s book on which it is based – left us with, and the conundrum showrunner Bruce Miller had to address, since there is no more source material to work from.

What he and his writers (with the help of input from Atwood herself) came up with for season two plunges us into even darker territory that in the opening two episodes not only reveals June’s and fellow handmaiden Ofglen/Emily’s (Alexis Bledel) fates, but also more about how things subtly changed in the time before Gilead came to be. 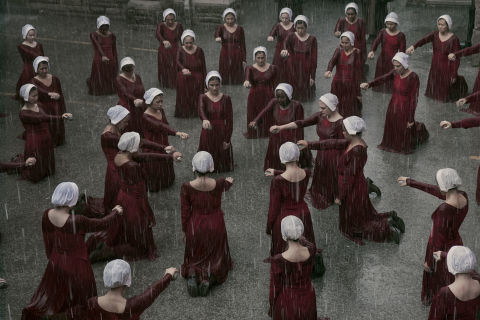 In flashback, we see that a pre-Gilead (but still fertility-obsessed) America has June having to ask her husband for written permission before she can be given birth control, while college professor Emily learns about the new rise in anti-LGBTQ feeling when a colleague is lynched for being homosexual. The subtle, growing persecution that these scenes reveal is utterly plausible and completely petrifying.

Back in June’s present day, it’s clear that her journey has become even more terrifying – if that’s possible – than in the first season. When those van doors open, she hasn’t been delivered to safety, but instead is herded with other – presumably disobedient – handmaids along a corridor that opens out into Boston’s Fenway Park sports ground. Muzzled by their captors, surrounded by armed soldiers and baying dogs, the frightened women are taken up onto wooden platforms and nooses are slipped around their necks.

Backed by Kate Bush’s haunting ‘This Woman’s Work’, the image of the sobbing women, shaking with fear (one so utterly petrified she wets herself) in the face of death, is an incredibly powerful, heart-in-mouth start to the season. 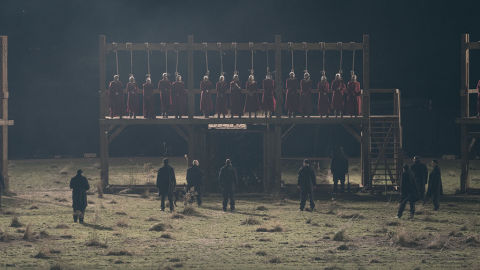 It turns out this is a punishment from Aunt Lydia (the superb Ann Dowd), who lectures about sin and God while the women – and quite possibly, many viewers – cry at the horror of it all. This could be Nazi-era Germany, a Southern States lynching, or any other historical atrocity, but it’s no less compelling for being fictional.

While Aunt Lydia lets the women down from the gallows, there is more punishment to come. Remember June discovered she was pregnant, presumably with Nick’s baby, at the end of season one. Once discovered, this pregnancy means that she is subjected to different treatment to the other handmaids but has to watch as they are horrifically tortured.

It’s shocking stuff, and just one of many scenes that you will watch through your hands. Throughout the first two episodes, in fact, there are moments both of true horror and edge-of-your-seat suspense.

While the first episode focuses on June, the second finally shows us the place we have heard about so much from the first season – the Colonies (as in: ‘if you misbehave, you’ll be sent to the Colonies’).

It is there that Emily – already genitally-mutilated as a punishment – has been sent. A polluted wasteland where women known as ‘Unwomen’ dig and fill bags of dirt and spend their nights in concentration-camp surroundings as their bodies fail due to the toxicity and E.coli-laden water. It is a literal hell on Earth. 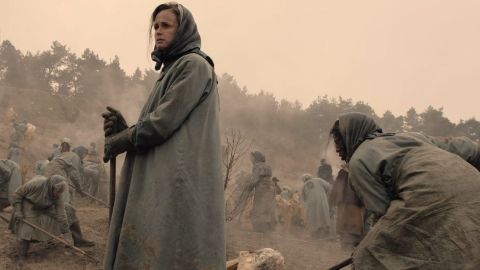 Here are people who were formerly professors, interior designers, mothers and educated women, all herded away because they are gay, or infertile, committed some Gilead misdemeanour or chose to resist. (Sounds extreme? The Khmer Rouge did much the same to the intellectuals of Cambodia not 40 years ago.)

It is here that Emily remembers, while helping a commander’s wife (Marisa Tomei) punished for falling in love, how her own world crumbled as she was separated from her wife (Clea DuVall) and child when laws recognising gay marriage were abolished overnight.

Scenes at the airport of the family of three attempting to leave the increasingly repressive regime are heart-breaking, scarily timely and extremely upsetting, rivalling in intensity any of the stories of June and the other handmaidens we have seen so far.

Thanks to inspired writing and stunning performances from Moss and Bledel, as you watch June and Emily’s stories – and their lives – unravel at the start of season two, you will be gripped, scared and mesmerised in equal measure. You’ll be counting the days until the next episode, while dreading what horrors lay ahead for our handmaidens at the same time.