Elle Fanning is unlikely to forget seeing Saudi Arabian film director Haifaa al-Mansour – whose 2012 film Wadjda, about a young Saudi girl who craves a bicycle, was a sensation in the West – arrive for her first day on the set of Mary Shelley. "I do think it is inspiring, Haifaa's story and what she has overcome," Fanning says. "She directed Wadjda in Saudi from inside a van. When she came on set she started crying, because she's never been allowed on her own film set before. She's never done that. And all of that emotion she brought to the film."

Mary Shelley is not the kind of story you would expect a Saudi woman to choose to tell. The real-life Shelley is remembered for Frankenstein, the Gothic after-dinner entertainment she concocted while on an endless holiday with her then lover, the poet Percy Bysshe Shelley, his friend Lord Byron and her wilful half-sister Claire. The year was 1815; they were in Byron's house at Lake Geneva. Mary Shelley is a story of brilliant, difficult characters, but it is also an eye-pleasing story of aristocratic leisure and Empire line frocks that speaks of generations of BBC quality mini-series. When it screened at the Toronto film festival, one English journalist demanded to know why it hadn't been made in the Lake District, where Romantic poets properly belong. 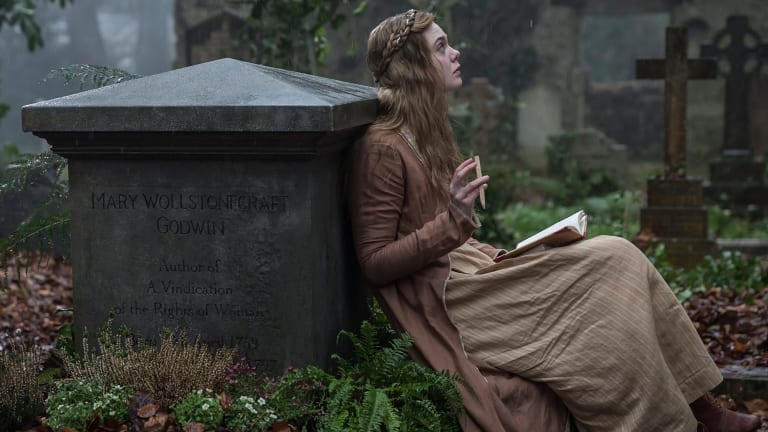 Elle Fanning as Mary Shelley, who understood that “imperfection is perfection”.

Al-Mansour agrees; she was amazed to be offered the film. "I was exactly like you. I thought, 'I don't know English women'," she says. Then she read Emma Jensen's script. "And it's an amazing story about a woman coming of age in a society that was very traditional, where she rebelled against it and she found her own voice. I kind of related to that. And I think it is very important for us as women to come together across cultures, wherever we come from, because I think women's experiences are very similar all over the world."

For decades, Frankenstein was published under Mary's husband Percy's name. Even now, not many of those who pull on a Boris Karloff mask for Halloween would recognise her name. "It is sad that Frankenstein is very masculine now," Al-Mansour says. "She doesn't own that thing; there is almost a disconnect between her and her book, but it is entirely a result of her struggle and her coming of age and her womanhood and her maternity." 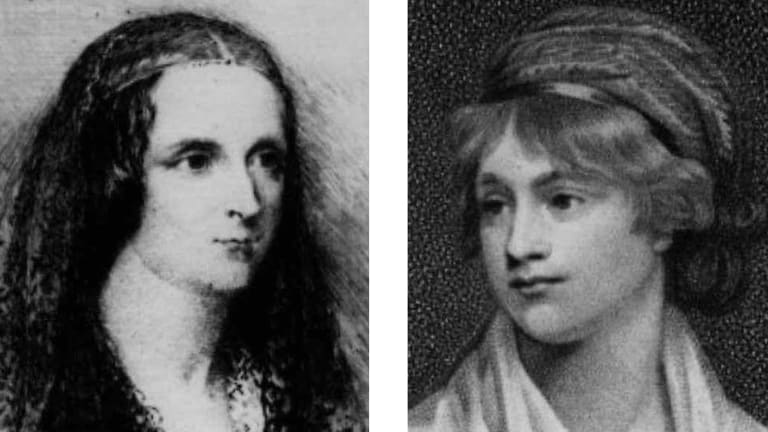 It was Al-Mansour who approached Fanning to play Mary Shelley. Fanning was only 16 then and 17 by the time they started shooting; she was still obliged to spent part of each day on set doing schoolwork. The real Mary was 18 when she wrote Frankenstein; Percy was only 21 and would die eight years later, with poetic works such as Ozymandias already established as classics. Most people don't realise how young these people were, Al-Mansour says. They lived so long ago that they have become old in our minds, but Mary Shelley was just a love-struck teenager.

Even so, she had already suffered a lifetime's pain and loss. Her mother died when she was two; her father remarried to a woman who bullied her. When she ran away with the boyishly careless Percy (Douglas Booth), whom she met at a party, she found herself in a hotbed of experimental "free love" propounded by Percy that she found deeply painful. Her first child had died. The only preparation Fanning could do, she says, was try to imagine what that might be like. "I live in my head and I'm very imaginative, so I just daydream a lot. I think about any character I do, but particularly for Mary Shelley a lot of self-reflection was important." At the end of it, she says, she felt suddenly older. "I felt wiser and more mature, I felt like I learned a lot from Mary how to be a woman."

There are decorously suggested sex scenes, but if Mary Shelley were simply a bodice-ripping story of wayward bohemians it would not amount to much. At its best, it focuses on the eponymous heroine's intellectual history. "I think it was a dialectical relationship," Al-Mansour says. "Percy was her mentor and educated her about poetry when they first got married, but, as their journey went on, I think her philosophy and her knowledge of the world surpassed his." He thought Frankenstein should be an angel; she understood that "imperfection is perfection". Loss and disillusionment had given her "a deeper understanding of the world, while he stayed in this state of boyhood".

Al-Mansour faced a comparable constellation of obstacles to finding her own voice as a film director. Thirty-five years ago, all cinemas in Saudi Arabia were closed on moral grounds although, curiously, video stores continued to operate. Women could not enter them, but Al-Mansour would go the store in Al Hasa, the town where she grew up, and stand on the pavement outside with the catalogue. Her picks – Disney animations, Jackie Chan action, Bollywood extravaganzas, whatever was there – would then be passed out to her. It was a unique preparation for entry to the University of Sydney, where she later took her master's degree in film and wrote part of Wadjda. 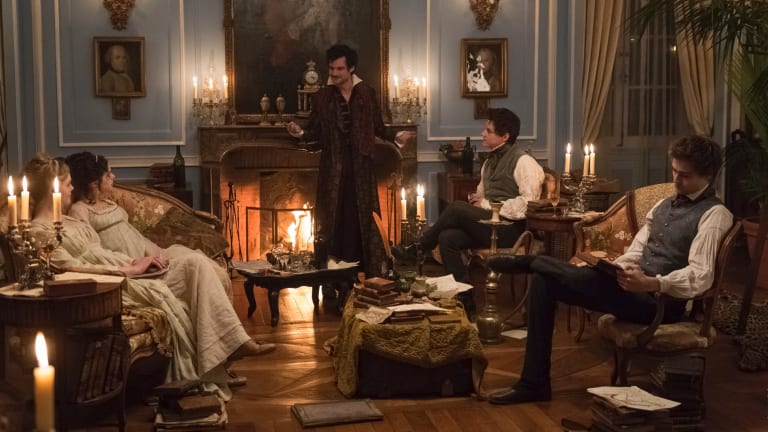 Last year, the relatively liberal crown prince Mohammed bin Salman opened a single cinema in Riyadh and announced a substantial new film-making fund as part of the kingdom's drive to diversify away from total reliance on oil. Al-Mansour hopes Mary Shelley will be shown in the cinema, even though it would mean cutting its suggestive sex scenes. "That's OK. I think it's amazing to have the film shown in Saudi Arabia," she told The New York Times. "It's not all or nothing." She understands the culture, she says; she doesn't want to be outrageous "because that puts a block between you and your audience". Her next film will be made in Saudi Arabia. Called The Perfect Candidate, it is about a young woman who wants to run for municipal elections. This time around, she will be getting out of the van.

In Toronto, Fanning is on her way to make a film with Woody Allen. The film she says had the most impact on her work was Sally Potter's little-seen drama about teenage friendship, Ginger and Rosa; after making two films with Sofia Coppola, she says she feels like part of the clan; she made one of the strangest films of this century, Neon Demon, with Danish-American director Nicolas Winding Refn. "I try to be as risky as possible." 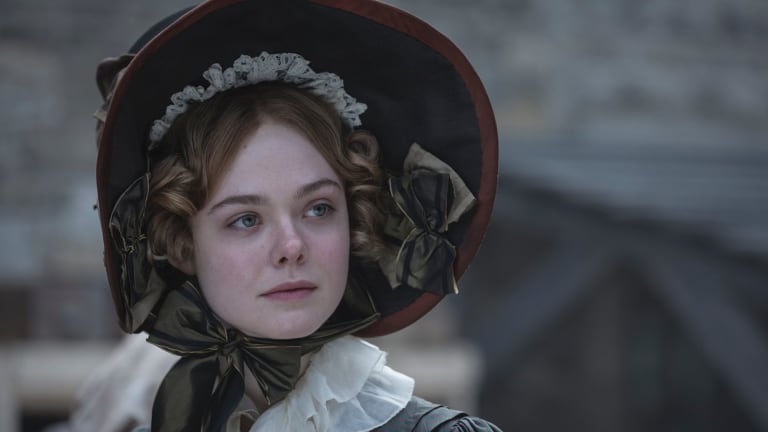 Elle Fanning: “I felt I learned a lot from Mary about how to be a woman.”

It is quite a mission statement from someone who is still only 20 and winningly uncool; Fanning's most frequent response to questions is a schoolgirlish "Gosh!" So what would she say to Mary Shelley if she could get into a time machine and join the gang in Switzerland? "Oh wow!" she exclaims. "I think I would want to ask her a bunch of questions. I do. Gosh! I think I would want to understand more about why she thought that the monster in Frankenstein was her – because that's what I feel she believes. And that she feels Percy is Victor, who has created the monster. And I feel like I would want to ask her what she thinks of herself." Now that is a good question, no matter where, how or when you grew up. Al-Mansour isn't in the room, but I can just about feel her vehement agreement.

Gosh! I think I would want to understand more about why she thought the monster in Frankenstein was her.