The grime legend was back on our screens to promote his new album BDL Bipolar and single ‘Woah’, and used every opportunity available to mention the release dates.

So when Piers Morgan and Susanna Reid asked him to host the weather instead of Laura Tobin, he wasted no time in taking them up on their offer.

Laura even gave Big Narstie the clicker to change the slides on the TV, but with new music to promote, he had other ideas in mind…

Instead of depressing viewers by telling them about the heavy rain forecast for the afternoon, he decided to tell everyone about his music – while doing the robot dance (what else?).

As he jolted from side to side in front of the weather map, he said: “Boom! BDL Bipolar album. New single ‘Woah’ out today. Click a button if you want to change up. As we’re seeing right now, the streets, yeah, are surrounded by water. It’s a mad thing.”

While it wasn’t quite what viewers are used to on the show, Big Narstie went down a treat with people tuning in at home. Just check out the reaction on Twitter:

And as Big Narstie’s weather report was cut off in its prime as Good Morning Britain handed over to Lorraine, here’s a bonus clip from Laura:

Piers and Susanna asked Big Narstie to step in to present the weather after he did so during his last Good Morning Britain interview.

He told the presenters that the segment had done wonders for his career, as he apparently now has a much older fanbase – so much so that he is now open to doing tours at retirement homes… 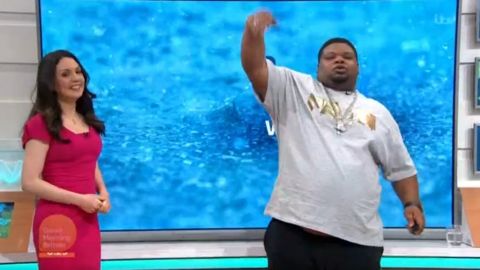 “I love that. I’ve got a whole new fanbase.”

One person who might not be a member of Big Narstie’s fanclub, however, is Charlotte Hawkins,

After complimenting Susanna, telling her she looked “lovely”, Piers asked Big Narstie to extend the praise to Charlotte.

But he wasn’t prepared to, telling the blonde host: “You’re nice but you ain’t got what Susanna’s got!”

Good Morning Britain airs on weekdays from 6am on ITV.