When you think George Clooney, chances are the word "s—head" doesn't immediately come to mind. But that's what, and who, he plays in Catch 22 (Stan, fresh episodes each Saturday from May 17), the six-part series based on Joseph Heller's 1961 novel about the experiences of an American bombardier in World War II.

Scheisskopf – German for s—head – goes from lieutenant to general over the course of the novel, and moves from training inductees in the art of marching to commanding them on the battlefield. In the series, Clooney plays him brilliantly as the embodiment of lug-headed military stupidity. He barks orders that make no sense even to himself. He demands robot-like precision in the marching technique of his charges, wishing he could drill bolts into their legs and attach wires "with exactly three-and-a-half inches of play" so they might finally get the arm movements right. And when someone is stupid enough to provide the answer he demands to a rhetorical question, he punishes them for doing so. Oh he's a Scheisskopf all right.

Clooney is clearly one of the key attractions and selling points of the series, which was created by Australians Luke Davies (writer of Candy and Lion) and David Michod (writer-director of Animal Kingdom and War Machine). He's an executive producer and one of three directors (with Ellen Kuras and Grant Heslov) too.

But he's not really one of the main actors; he's in the first third of episode one, barking those nonsensical orders on the parade ground, but not in episode two at all – only the first two episodes have been made available for preview – though I suspect (and hope) he will reappear in later ones.

The real star is Christopher Abbott (best known as Marnie's boyfriend Charlie in Girls) as Yossarian, a member of a US bomber squadron based in Italy. He's our sceptical guide through the absurdity and horror of war, and his main ambition is simply surviving. 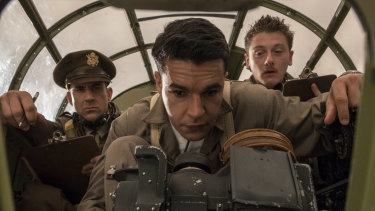 Christopher Abbott (centre) as Yossarian, for whom the phrase “war effort” means doing everything possible to avoid being killed.Credit: Philippe Antonello/Stan

The odds of that seem pretty reasonable at first, as the days are punctuated with swims at the beach and games of basketball, using half a metal garbage bin as a hoop. But as the Allies inch ever closer to victory, the end seems paradoxically to recede further and further away.

Having flown 16 of his allotted 25 missions, a shell-shocked Yossarian announces: "I'm not sure I can take this shit. I can't fly any more missions. I can't do nine more."

It's all arbitrary, driven by the caprices of an unhinged commander (Bloodline's Kyle Chandler as Colonel Cathcart, the role Clooney was initially slated to play) and a burning desire to get the job finished as quickly as possible. Never mind that Yossarian's squadmates are dropping like flies. 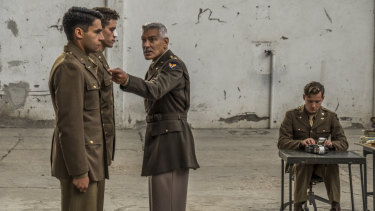 Few things in war are as important as the distance a soldier’s hands travel while marching, insists George Clooney’s Scheisskopf.Credit:Stan

The Catch 22 of the title is a logical paradox, explained to Yossarian by Doc Daneeka (Heslov). It goes something like this: you can get out of flying more missions if you're crazy. All you have to do is ask. But only someone who really is crazy would want to fly any more missions, ipso facto anyone who doesn't want to fly them is sane and thus fit to fly more missions.

It's a long time since I saw Mike Nichols' 1970 film of Catch 22, but I remember it as a somewhat fragmented, impressionistic tale of a war that makes zero sense. That's not a million miles from Heller's novel either.

This series – at least on the basis of its first two episodes (neither of them, incidentally, directed by Clooney) – is a little more linear in its handling of the material, but it does a brilliant job of capturing the absurdity, comedy and horror of war. What is it good for? Absolutely nothing.