But really, “The One With the Embryos” isn’t just a flawless episode of television; it’s a flawless episode of “Friends,” in that it illustrates just how deeply the creative team understood their show. Lifting Phoebe out of the A-plot actually works in her favor, since learning facts from her past would spoil some of the enigmatic character’s mysterious allure. Meanwhile, we get to learn loads about Monica (animals dressed as humans are a legit pet peeve), Rachel (her actual favorite movie is “Weekend at Bernie’s”), Joey (childhood friend: Maurice, the Space Cowboy!!), and Chandler (who lives in fear of “the Irish jig guy”), all driven by the thrill of high-stakes competition. (Two pets’ lives are at stake!) Each performance exhibits the heralded timing and chemistry quickly constructed by this superstar cast, and there’s even room for supporting stars like Giovanni Ribisi to make their mark. (“My sister’s gonna have my baby!”)

But it’s getting to know these characters, in such a condensed amount of time, that speaks to the series’ greatest strength: “Friends” is a sitcom rooted in intimacy, even when its comedy comes off as broad. Unfortunately, “Friends: The Reunion” is a special made to be as broad as possible, and it too often ignores or steps on the intimate connections fans already have with their favorite fictional friends.

“Wait a second,” you might say. “Isn’t this the show with the monkey?” Yes, the NBC sitcom made certain gestures to appeal to a wide audience — per “The Reunion” moderator James Corden, “the show has been watched over 100 billion times across all platforms” — and its episodic format allows viewers to appreciate individual half-hours even if they missed a few entries here and there. But the oft-discussed magic of “Friends” — whatever combination of timing, talent, and casting came together to make a landmark hit with unprecedented legs — isn’t as mysterious as all the questions imply. Much of it stems from good, old-fashioned hard work. (The high-level of skill and dedication that went in to every facet of “Friends” is why I still consider it a Top 5 TV comedy.) But if you want a deeper explanation, what made David Crane and Marta Kauffman’s series click then and keeps its connection strong to this day is that each viewer is treated like the seventh Friend. You’re part of the inner circle instead of an outside spectator, which makes watching the series an intimate experience, not a broad one.

“Friends: The Reunion” can’t quite grasp this concept and instead tries to have it both ways. The feature-length special (out Thursday, May 27 on HBO Max) balances clips from the show with new interviews, table reads, and cast conversations between Jennifer Aniston, Matthew Perry, Matt LeBlanc, Lisa Kudrow, Courteney Cox, and David Schwimmer. When it’s just the six of them, the “Friends” reunion can feel a bit like seeing the show: Hanging out with your old pals! Listening to them catch up! Laughing at shared memories! There’s even a recurring segment where the six cast members recreate “The One With the Embryos” trivia game: Perry and LeBlanc team up against Aniston, Cox, and Kudrow, while Schwimmer lobs questions about the show at each team. 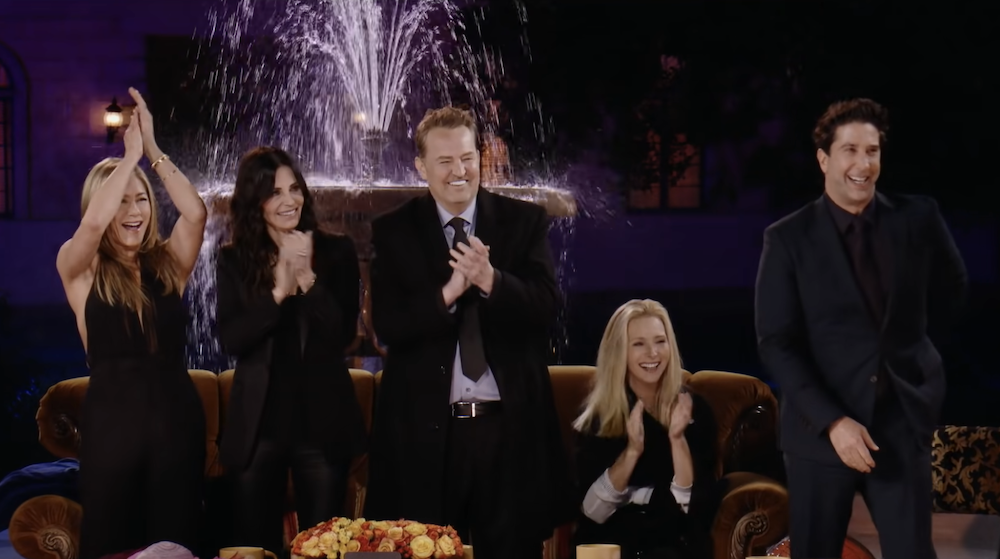 But much like how the show itself succumbed to the phenomenon of “Friends” in later seasons — adding big name guest stars, straining to keep Ross and Rachel apart, keeping its cast of stars from leaving for better gigs — the reunion spends an inordinate amount of time emphasizing the series’ cultural and global significance, while bringing in random celebs to vouch for the show’s bona fides, as if their fandom somehow speaks to the show’s value: “Popular people endorsing a popular thing makes them both… more… popular?” (Seriously: Why is David Beckham here?)

Just seeing the core cast, 17 years older and inhabiting the sets out of character, is a little bizarre, but what makes the reunion so much weirder (to the point where I had to take a break 20 minutes in) is how desperate it feels. So much emphasis is placed on superficial, super-staged moments — “Look, look! Joey and Chandler are sitting in their chairs again!” — and so little room is made for genuine thought. (The producers are far too happy to have an ex-cast member show their face without saying much of anything — Elliott Gould, you deserved better.) A small part of the special invests in the closeness and camaraderie earned by the series, but the rest is either overly orchestrated nostalgia bait or peculiar claims for relevancy through popularity. All the clips, references, and literal dress-up (for the closing fashion show) contribute to an alarming state of emergency: How badly does HBO Max need “Friends” to succeed now that its parent company (WarnerMedia) is being spun off from AT&T?

Such thinking only begs the question: Who is “Friends: The Reunion” actually for? Is it for the casual “Friends” fan who may have forgotten about the show after 17 years off the air (and thus might be lured to HBO Max to revisit the show)? Or is it a gift for super-fans who keep “Friends” on in the background, added HBO Max as soon as the show moved there from Netflix, and generally can’t get enough of their favorite sitcom?

After watching all 104 minutes, it seems to be trying for both — and failing twice in the process. Hiring Corden as moderator is an immediate red flag. Trotting out “The Late Late Show” host to toss softballs at the cast and cackle hysterically at mundane gossip is exactly the kind of thing that contributes to the perception of “Friends” as shallow and superficial. Casual viewers might appreciate the accessible questions, but die-hard fans hold a deeper connection with this cast. Maybe they tracked their lives and careers off-screen, maybe they just really fell for their characters and want to know a bit more. Either way, they’ve heard them all answer, “What’s your favorite episode?” and “How much do you stay in touch with each other?”

Similar perfunctory gestures tarnish the returning guest stars. James Michael Tyler, who played Gunther and, outside of the core six, appeared in the most “Friends” episodes of anyone, is only allowed to wave at the group from a video conference call and tell them how great they look. Tom Selleck pops through the purple door without saying one word about Richard, his seasons-spanning dreamboat dentist. Maggie Wheeler, the woman behind Janice’s iconic “oh my gAWd,” gets to perch on the edge of the iconic sofa for one full minute, while Corden waits (rather impatiently) for her to do the voice already so they can move on.

The special fares better when the cast is left (somewhat) on their own. Their casual conversations from the set make you feel like part of the reunion, as they remember old bits (or, often enough, don’t remember) and reminisce about their 10 years working together. The script readings show how quickly the cast can fall back into their characters, and mixing their modern line readings with famous clips is a fun reminder of how thoroughly they embodied these friends. But the opening shots are the most powerful by far, as each star walks through the studio doors into the recreated NYC apartments. Schwimmer enters first, and as he slowly, cautiously edges toward Joey and Chandler’s kitchen, you can see the thin gray line that separated the stage from the studio, the apartment from reality; “Friends” is finally breaking the fourth wall, all so you, the seventh Friend, can share in this intimate experience of remembering what it was like to be a part of “Friends.” 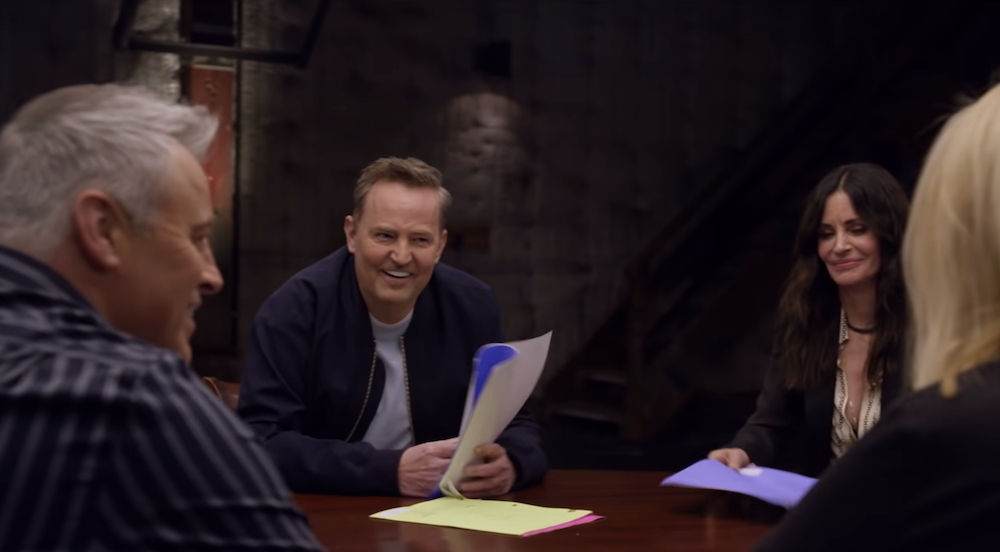 Matthew Perry and Courteney Cox in “Friends: The Reunion”

Soon, though, the cherished reality constructed oh-so-carefully over 235 episodes is tossed aside. They’re all put on a traditional stage, Corden takes the mic, and there’s a barrier between you and your six friends. Such complaints may seem trivial; of course there was going to be a sit-down interview, and of course whoever was asking the questions wasn’t going to dig too deep. But as a show, “Friends” did dig deep. Its scripts tackled failed marriages, surrogate pregnancies, shitty jobs, and a slew of tricky relationships. Its direction plugged each cast member into as many frames as possible, providing added emotional context through reactions or carefully placed props. (Joey and Chandler’s etch-a-sketch notepad offered so many hidden insights.) With every shared detail, be it a clever quip or important milestone, the bond between these six friends and their audience grew stronger, richer, and more meaningful. For many, “Friends” wasn’t just a fun, silly reprieve; it was a friendship itself.

The reunion doesn’t honor that friendship, even if, in the end, it should accomplish its ultimate goal: to get people talking about “Friends,” streaming “Friends,” and paying HBO Max subscription fees to make sure they can continue doing both. Whether the reunion lures new subscribers is another question (it certainly doesn’t address any long-standing complaints), but if you watch the special, odds are you’ll be queuing up your favorite episode once it’s over — maybe it’s “The One With the Embryos.” If so, it shouldn’t take long to reestablish your connection with the crew. It’s just a shame the reunion couldn’t offer that same intimacy.

“Friends: The Reunion” premieres Thursday, May 27 on HBO Max.