Many people who have played the game before are pushing for Da’Vonne Rogers to win AFH and the $25,000 prize that goes with it.

Da’Vonne finished in 10th place after Memphis Garrett nominated her and Kevin Campbell during Week 7.

All 16 members of the BB22 cast are eligible in the voting, and we have a breakdown of where and how fans can vote.

For a lot of the season, former houseguests have been speaking positively about Da’Vonne on social media. The call for her to win AFH/AFP started a while ago and the push has only increased following CBS opening the voting.

Big Brother 19 winner Josh Martinez recently posted, “Have a lot of friends in this game but this is long overdue Davonne deserves AFP for many reasons. Let’s make it happen #bb22.” 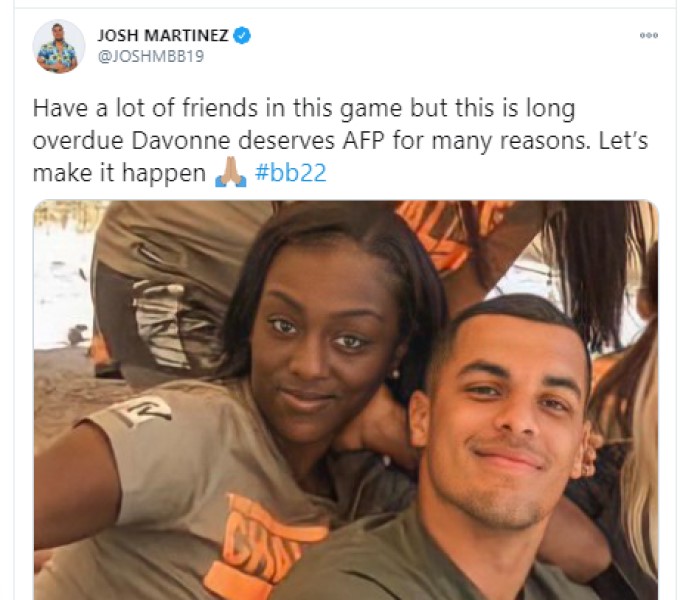 Big Brother 15 winner Andy Herren has also continued his support for Da’Vonne, posting about it many times on his Twitter page.

His new plea for people to support Da’Vonne reads, “Don’t care about #BB22 anymore?? Same!! We still have hope for a perfect ending, though! Da’Vonne can win America’s Favorite Player and end the season on a high note! She was entertaining and she used her massive platform for good! She deserves it!!!!”

Natalie Negrotti, who played with Da’Vonne as a member of the Big Brother 18 cast, has also been weighing in with her support.

Natalie wrote, “All I gatta say is @DayDaVonne_ for AFP!!!! The meme queen deserves it she gives us laughter all year long.”

Even Nicole Anthony from Big Brother All-Stars 2 is pulling for Da’Vonne to win AFH.

The voting remains open until the morning of Tuesday, October 27 and fans can vote each day until then.

Big Brother 22 starting to wrap up

We are getting close to the end of Big Brother 22, with the season finale airing on Wednesday, October 28. That’s when we will find out who has won the $500,000 prize, as well as who has won America’s Favorite Houseguest.

Applications are already open for Big Brother 23, so for fans who think they have what it takes to compete, now is the time to get those applications submitted.

Recently evicted houseguest Christmas Abbott is also doing interviews, where she has spoken about topics like fighting with Da’Vonne, her relationship with Memphis Garrett, and regrets she might have from her time in the house.

Big Brother airs Monday at 8/7c and Wednesday at 9/8c on CBS.