‘Who is Mystery Girl?’ – it’s the question that’s consuming The Flash fandom right now, with all manner of mad theories being spun out across the internet.

Jessica Parker Kennedy made her screen debut five months ago as a mysterious stranger at Barry Allen’s wedding to Iris West, making a handful of further cameo appearances in recent episodes. One thing we do know about her top-secret identity: it’s somehow tied to the threat that Team Flash will be facing next year, in season 5.

Here are all the clues that The Flash has dropped so far, followed by 9 popular fan theories as to who ‘Mystery Girl’ might turn out to be.

Technically, Mystery Girl actually first appeared in an episode of Supergirl, as part of The CW’s four-way crossover between its quartet of superhero shows. (Alright, technically there’s five superhero shows on the network, but Black Lightning isn’t officially part of the Arrow-verse.)

Popping up at Barry and Iris’s (first, unsuccessful) marriage ceremony, the young woman – apparently working on staff, serving drinks – appeared nervous when she ran into Barry, but assured him that their wedding would be “one for the ages”. 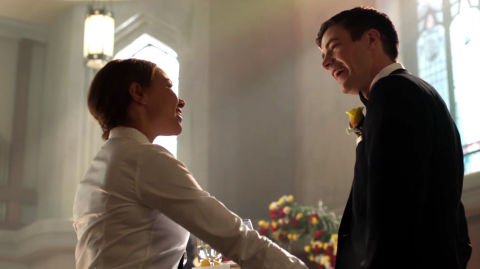 Barry had the feeling that the pair had met somewhere before, but Mystery Girl insisted that they hadn’t and that she was “a complete and total stranger”.

Her first official appearance on The Flash was in episode 4.08, ‘The Elongated Knight Rises’: running into Cisco and Ralph at coffee shop Jitters, Mystery Girl again seemed awkward and over-excited at their presence.

She insisted on paying for their drinks, before swiftly exiting… but was later seen scribbling in a journal, sketching the same symbols that Barry had when he returned, confused and disoriented, from the Speed Force. 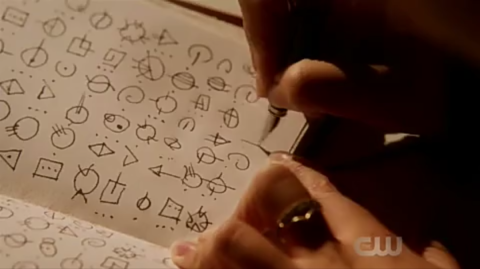 In episode 4.15, ‘Enter Flashtime’, Mystery Girl returns to Jitters, colliding (quite literally) with Harry Wells and Caitlin. Spilling her coffee over the pair, she apologised for being “nervous”, adding, “I’m supposed to be meeting some people here for the first time.”

Shortly afterward, we see that her awkward and clumsy demeanour is apparently a facade. “Good luck with your meeting,” says Caitlin as she departs. “I hope it goes well.”

“It did,” says a stony-faced Mystery Girl.

The character’s most recent, and most revealing, cameo came in 4.20, ‘Therefore She Is’. Now posing as a courier, she delivered a diaper bag to the pregnant Cecille and Joe. “It looks like it’s a gift from someone who wants you both to know how special you are,” she says. “Someone who understands that time is precious, and right now is all we’ve got.”

Mystery Girl appears unsettled when Iris enters the room and exits without anyone noticing. How? Simple – she’s a Speedster!

So what does this all mean, and who the heck is Mystery Girl? Here are some of the most popular theories, from the plausible to the downright outrageous, derived from on-screen clues and the comic book source material. 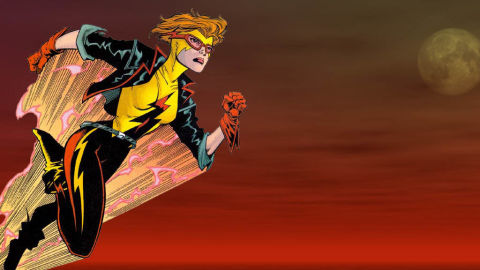 By far the most popular theory is that Mystery Girl is Dawn Allen, Barry and Iris’s daughter from the future who’s somehow found herself back in time. (Barry, after all, is able to time-travel… though it always ends badly any time he takes a trip back into history.)

This would explain why she seems nervous around the younger Barry and Iris, and indeed the whole gang, why she put emphasis on her meeting Harry and Caitlin “for the first time” and, of course, why she has super speed.

Notice how Mystery Girl generates a mixture of golden and purple electricity when she runs? Golden, like Barry, and Purple, like Iris (when she was briefly transformed into a Speedster in episode 4.16, ‘Run, Iris, Run’). 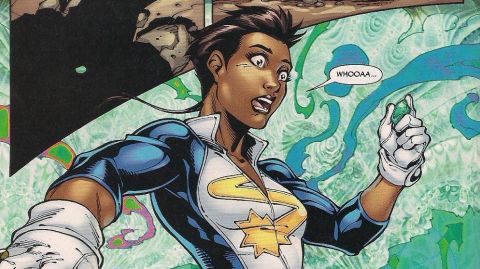 …or alternatively, she might be Jenni Ognats – also known as the super-heroine XS. Jenni is Barry and Iris’s grandaughter and also a Speedster, so all the clues we’ve seen so far could apply to her as easily as they could to Dawn. 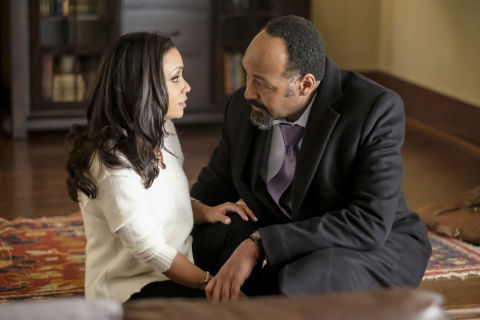 Outside of Mystery Girl being Barry’s daughter / granddaughter, the next most popular theory has her as Joe and Cecille’s daughter (again, from the future).

This is mostly based on her emotional exchange with Cecille when she dropped off the baby gift, her very specific suggestion that Cecille looked like she would give birth “in 21 days” and the fact that Cecille and Joe are indeed expecting a girl.

One point against this, though: when Cecille developed temporary telepathy as a result of her pregnancy, she and the baby underwent a medical check-up and Caitlin confirmed that the child had no meta-human DNA. That suggests Joe and Cecille’s daughter can’t be a Speedster, unless she acquires her powers later rather than possessing them from birth. 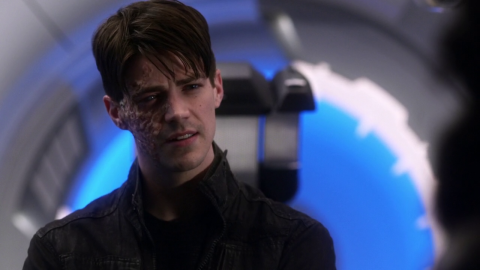 If not Barry’s daughter, could Mystery Girl be the offspring of The Flash’s dark mirror image?

Savitar was the chief villain of the third season, a twisted version of Barry from a (now-erased) potential future. He was trapped in the Speed Force for a long while and, according to one piece of Reddit speculation, could’ve passed the Speed Force ‘language’ – ie those weird symbols – onto his little girl. 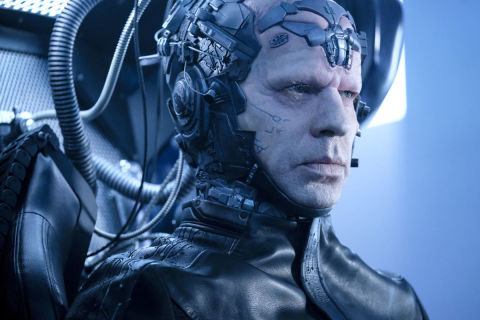 This year, Barry and company have found themselves pitted against Clifford DeVoe, a criminal mastermind with a paranormally powerful intellect.

The Thinker has the power to transport his consciousness from one meta-human to another, gaining their various powers as he does so. If, at some point, DeVoe is able to take control of a female Speedster, he could theoretically travel back in time to aid his past self in the battle against Barry.

Mystery Girl is a future version of The Thinker! Possibly.

…or she might be DeVoe’s daughter. Bit of a thin one, this, but those mysterious symbols she and Barry were both seen sketching also appear etched into the skin of Devoe’s original body (see the picture on the entry above, on the side of his face), so it’s feasible she does have some connection to him. 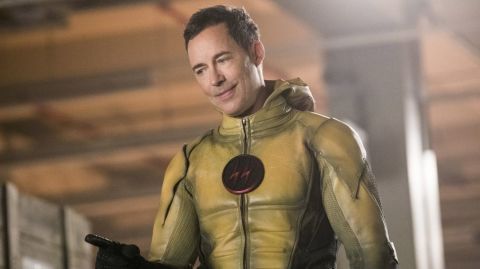 Barry’s greatest nemesis, the man who murdered his mother, has worn a couple of different faces across the series run.

At the close of their most recent encounter, in the aforementioned four-show crossover, the villain also known as Eobard Thawne remarked, “I wonder what face I’ll be wearing the next time we meet, Flash…” 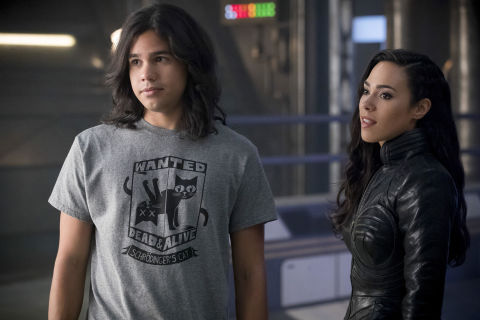 The Flash fans are really invested in the idea that Mystery Girl is someone’s daughter from the future, huh?

We love the reasoning behind this theory, though: she’s been seen a lot in Jitters, and given that Cisco’s girlfriend Gypsy is from the alternate Earth 19, where coffee beans are extinct, where else would their future daughter go to satiate her caffeine cravings? 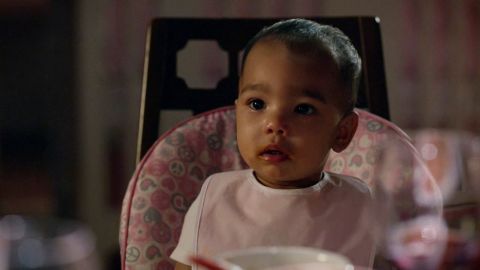 This, though, is our favourite left-field suggestion.

Before Barry went back in time and changed history, Diggle from Arrow had a daughter: Sara. But after The Flash’s meddling, the timeline was changed and Diggle Jr was now a boy named John.

What if Mystery Girl is Sara, having somehow survived the elimination of the original timeline? Now she’s back, has she come to Barry looking for answers… or for revenge?

We won’t discover Mystery Girl’s identity until The Flash‘s fourth season finale, airing May 22 in the US, which means we’ve still got two-and-bit-weeks left until the truth is finally revealed.