Remember Paul Potts? You know, the amazing opera singer who warmed all our hearts and went on to win the first ever series of Britain’s Got Talent?

Well he returned to the place where it all started on tonight’s Britain’s Got More Talent… though not to belt out an opera classic, unfortunately.

Nope, he was back to play a game called ‘Mandy Pong’ with Amanda Holden, which involved catching ping pong balls in cups attached to their bodies.

And as they went head-to-head as Stephen Mulhern watched on, Amanda ultimately proved triumphant.

Tonight’s Britain’s Got More Talent also saw Simon Cowell and David Walliams joke around after the former claimed he “reinvented” the latter.

“David was, I wouldn’t say he was in trouble, but, yeah, I came at the right time,” Simon said, David hitting back: “And for him, I saved the show.”

Meanwhile, the main show saw the audience and judges blown away by an illusion act, which confused and delighted viewers in equal measure. 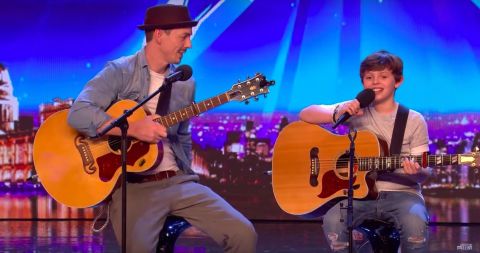 Simon also pressed his Golden Buzzer for a father-and-son act, partly because they reminded him of his own son, Eric. N’aww.

“You two, that was fantastic,” he said. “That was a moment. Well done you two.”

And Alesha Dixon claimed they were the “coolest father and son act” they have had on the show.