Fear the Walking Dead is in a potentially fantastic position at the moment. With The Walking Dead finally staggering to the end of its eighth season – and annoying lots of people in the process by keeping Negan alive – Fear has poached arguably its best character and actor in Lennie James’ Morgan.

The first episode of Fear season 4 was dedicated solely to Morgan’s journey from one series to the other, so now the show has to deal with the sacrifices it had to make to catch up with Morgan’s timeline. To squeeze him in, the show jumped forward a significant period of time and hasn’t yet dealt with the fallout from the season three finale. And the way it does so seems frustrating at first, but is actually rather refreshing.

We rejoin Madison, Nick, Alicia, Strand and Luciana over a year after the dam explosion of season three, and they’re all living in relative paradise. The fact that we’re meant to just accept that everyone survived without seeing any of the aftermath is frustrating, and yet the series is confident enough in its storytelling that it gets away with it.

With Nick suffering from PTSD and/or agoraphobia from the experience of the dam explosion, the series suggests that these events aren’t going to be ignored or forgotten, even if we don’t see them happen first hand. Nick experiences flashes of the chaos of that day, but that’s all we get. The fact that he’s still affected by it a year later, though, lends weight to what happened. Even if the ‘reboot’ means we aren’t going to be shown them, those events still have to matter.

And when you think about it, what value is there in actually showing Madison search for and find her surviving family and friends? Telling it in shorthand, as the series does here, initially seems like a cheat, but Fear is probably better off focusing on new stories. As long as the show acknowledges the events and the impact they had on the characters, that’s arguably enough. 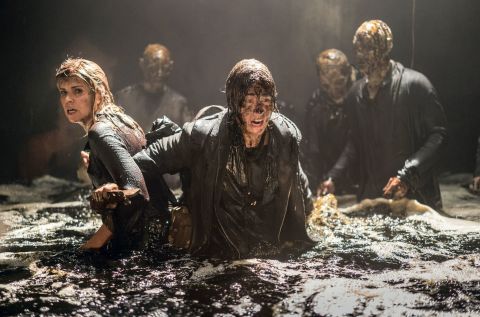 The Clark family have been living in an old baseball stadium, dubbed ‘the Diamond’, for one whole year, having made new friends within and established rules of survival to keep the camp safe. Strand has a new admirer, and Nick has taken to farming. They even have working showers!

At first, this too feels frustrating, as we’re simply thrown into a new status quo without seeing any of the in-between or build-up to it. Then again, consider the number of times across both series that we’ve seen people stumble upon new camps, distrust each other at first, come to learn a grudging respect, and then ultimately find common ground.

Did we really need another rehash of that? Probably not. Much like Game of Thrones proved when it eventually stopped taking six episodes to depict someone travelling from A to B, sometimes it’s okay to use shorthand and skip the connective tissue.

And there’s another point of potential frustration: we’re two episodes into Fear now, and while Morgan has crossed over, it’s not much of a crossover unless we actually see him interacting with the established Fear characters.

Morgan, John and Althea were great together last week, and it was nice to catch up with Madison et al this week, but Fear really needs to start capitalising on its crossover potential more substantially, and soon. Viewers that may have followed Morgan over from The Walking Dead will be most invested in him, and if they don’t get enough, there’s a risk they might jump ship.

And for established Fear fans, he offers a chance to view the Clark family through a new lens that audiences will be eager to explore. 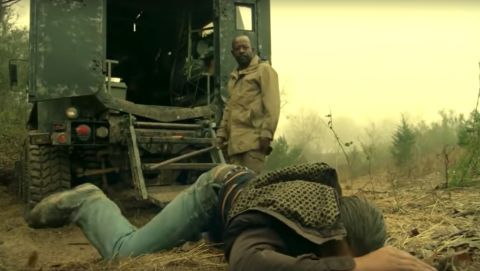 And yet even two episodes of minimal crossover isn’t as frustrating as it might be, since it feels like the writers have a coherent plan in place. The episode ends on a promising note, with most of the cast now together, and the narrative converging in one place, in one time. We’re all caught up and ready to go!

There’s still plenty to learn – did Daniel survive? Where is Madison in the present? What happened between the Vultures arriving at the Diamond and everyone finding Morgan on the road? – but Fear would be wise to put any further flashback segments aside and simply show us an episode of Morgan on a mission with the Fear gang next. The confident storytelling so far suggests that Fear is indeed going to give the fans what they want.

Despite potential worries, Fear the Walking Dead‘s ‘reboot’ has managed to confidently avoid many potential pitfalls. And with many people’s patience with the parent series wearing thin, that Fear has chosen this moment to shine is very good news for them indeed.