Elena Roarke may have a fascinating backstory, but she’s got nothing on the guy drinking out of her toilet.

Fantasy Island briefly returned to Fox on Thursday with a two-part Christmas special, much of which focused on Elena’s golden retriever Mr. Jones. In his previous life as a human, “Nathan” was apparently big in the medical world, working alongside his wife and best friend to develop life-saving technologies. But when his faulty designs were blamed for several deaths in a trial, Nathan ran away to Fantasy Island, where he… you know… turned into a dog.

So imagine Nathan’s surprise when his wife showed up as one of the island’s holiday visitors. And imagine her surprise when she discovered that her husband had turned into a dog. And imagine our surprise when, after reconnecting with his wife, Nathan reverted back into a totally naked human. (Honestly, we were wondering how his transformation was going to play out. Fully clothed? No clothes at all? Just a shirt, like Winnie the Pooh? The possibilities were endless.)

Then came a few more plot twists: Nathan’s “best friend” Tony also came to the island — and he was now dating Nathan’s wife! None of this sat right with Nathan, so the former dog did a little digging, ultimately proving that Tony was the one responsible for their patients’ deaths in the first place. Tony planned to silence Nathan for good, but when he finally pulled the trigger on his gun, only a flower popped out. It was apparently Elena’s doing, largely to save Nathan’s life… and also because the island staff’s all-white dress code simply doesn’t lend itself to cleaning up blood.

“We’re going to miss you so much,” Elena told Nathan once the dust settled. “But we’re so happy that you found your forever home.” (Roarke’s got jokes!) 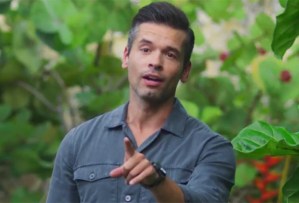 SO WRONG, YET SO ‘RIGHT’ | The island’s other big holiday visitor was a hotelier with commitment issues who longed to escape into a cheesy Christmas movie. But she got more than she bargained for when Elena’s fantasy overlapped with hers, causing’s Elena’s ex-husband James to appear as the “Mr. Right” in the guest’s festive film. To make matters worse, Elena messed with the magic of the island by taking James out of the woman’s fantasy, throwing the entire ecosystem into chaos. (Snow? In this climate?)

Despite strongly considering leaving the island to be with James, Elena ultimately realized that it’s where she belongs. This decision was further solidified when she got Javier’s Christmas present — the refurbished rattan chair upon which Elena’s great uncle (aka the OG Mr. Roarke) once sat. But is this the first holiday gift of many from Javier to Elena? Considering John Gabriel Rodriquez was recently promoted to series regular, we wouldn’t be surprised.

“I’ve had a couple of discussions with the showrunners, and they told me they have a lot in store for Javier next season,” Rodriquez tells TVLine. “I’m looking forward to seeing how they’re going to flesh him out, the connections that he’s going to have with Elena and Ruby, how that’s going to materialize. You’ll be seeing a lot more of Javier.”

Roselyn Sanchez agrees, even though she never expected Elena to be given a love interest — especially so soon into the show’s run. “It was fast, but it was smart,” she says. “And I was pleasantly surprised to see that the audience loved them together.” 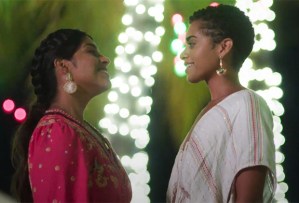 GIRL, PUT YOUR RECORDS ON | As for Ruby, the island’s No. 2 spent most of the Christmas special deciding what to get Dr. Gina, whom the island chose as her Secret Santa. And as fat (or the island) would have it, the extremely specific thing that Gina needed — a new needle for her record player — was inside the box that Mel left for her when he last visited.

Between that gift and his blessing for her to pursue a new relationship, Ruby and Dr. Gina shared a long-overdue kiss under a sky of festive fireworks.

Looking ahead to Season 2, Barnes says she’s “excited to watch Ruby become more comfortable in this new version of herself that has been so welcomed by everyone in Season 1.”

Did you enjoy your festive visit to Fantasy Island? What do you hope to see more of in Season 2? Grade it below, then drop a comment with your full review.