Is Evil‘s Sheryl about to tape a “Believe” sign over her office door?

Anything is possible in the warped world of Paramount+’s supernatural drama, which in Sunday’s episode invoked one of Ted Lasso‘s signature bits and  — lovingly! — twisted it into something demonic.

A quick recap: As the demonic cryptocurrency Makob rose in value, Sheryl (played by Christine Lahti) was dismayed to see Leland (Michael Emerson) sail into their boss’ office and try to take credit for the company’s success. But when she tried to get some time on The Manager’s schedule (that’s actually what the show is calling him), his assistant blocked her every attempt. Finally, after she bribed the receptionist with a huge Makob pile of his own, she gained an audience with the big boss and entered the room with a little gift in hand: shortbread cookies in a small, pale pink bakery box.

Fans of Apple TV+’s comedy Ted Lasso likely recognized the proffered pastries as very similar to the ones that Ted (Jason Sudeikis) brings to his employer, Rebecca (Hannah Waddingham) every day, a gesture that Ted calls “Biscuits With the Boss.” But that… is where the two shows diverge. 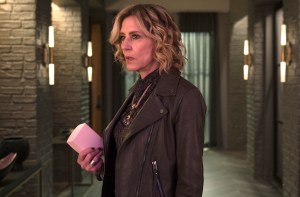 As Sheryl soon learned, her new superior is a five-eyed, cloven-hoofed, horned, stinky and ill-tempered demon  — though apparently only a select few, herself and Leland included, are able to see The Manager in his true form. She fought down her surprise and revulsion long enough to make a case as to why she should be promoted (while The Manager worked out on his in-office elliptical trainer and groused about his Sweetgreen salad being late — ha!). And after another visit, during which he consumed her biscuits in the most stomach-turning way possible, ordered her to use a back-scratcher on him and then slapped her on the behind, he granted her wish.

“Welcome to the team,” Leland told a visibly shaken Sheryl after she returned from the second meeting. She wondered whether she were having a psychotic breakdown. “Oh, absolutely,” he said, grinning.

TVLine hopped on the phone with Robert and Michelle King, co-creators of the recently renewed series, for the biscuits’ backstory.

TVLINE | Give me the genesis of the Ted Lasso reference.
MICHELLE KING | [Laughs] Well, we just thought it was funny that, you know, what happens if the boss you’re trying to curry favor with is an actual monster.
ROBERT KING | A bunch of this was kind of, you know, inspired by the Harvey Weinsteins, but it seemed not wrong to go to Ted Lasso because that’s such a touchy-feely heartwarming show, and if you’re bringing these biscuits all the time, and in the pink box, everything about it seemed to be the opposite of what this monster was. [Laughs] Sometimes we just do things because they seem funny in our head.

TVLINE | It’s such a wholesome thing on that show, and it’s so twisted here.
ROBERT KING | [When The Manager spits bile on the biscuits] to melt them down, it was playing off how birds and insects eat their food. [Laughs] We had fun.
MICHELLE KING | Too much fun. [Laughs]
ROBERT KING | Because it’s disgusting. [Laughs]

TVLINE | Is the reference contained to Episode 5, or will it be a recurring motif?
ROBERT KING | It’s recurring. [Laughs] How could you not?

TVLINE  | All kidding aside, at the end of the episode, we get an indication that Sheryl is in deeper than she might have ever wanted to be. When she realizes that she and Leland are seeing The Manager in the same way, she’s distraught.
ROBERT KING | Yes. What I like the way of how Christine Lahti’s playing it is, [Sheryl is] ambitious, and you’re kind of cheering her on in that way where she’s being bullied by her employees and everything, but then she will break through to some greater evil. So, I think what’s fun about the way Christine Lahti’s doing it is you have someone that you should boo at where she’s ending up, but I hope that you’re kind of cheering that she’s moving up the ladder. Because that’s the tendency of TVs and movies, to cheer the underdog.

What did you think of the episode? Hit the comments and let us know!