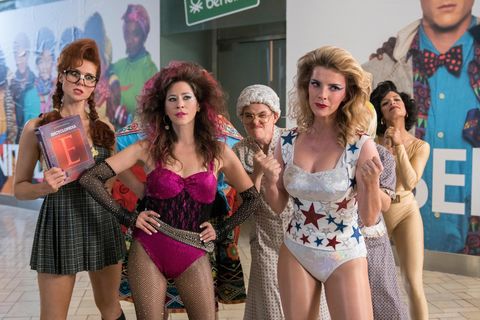 Much to the delight of GLOW fans, Netflix has renewed the Netflix series for a third season, which means you will most definitely see the Gorgeous Ladies of Wrestling in the desert. This is well deserved, as the show is nominated for a whopping 10 Primetime Emmy Awards, including Outstanding Comedy Series and Outstanding Supporting Actress in a Comedy Series for Betty Gilpin.

Did you think we’d GLOW to Vegas without you? Let’s do this. ? #GLOWS3 pic.twitter.com/tZhWzOJGHu

Here’s what we know about season three so far:

1. Season 3 might be a surprise to some. For a while—fine, just a couple months—it looked like GLOW was going to end with just the thought of the ladies and Sam going to Las Vegas. No one expected to actually see it on screen. As recently as Aug. 7, co-creator Carly Mensch revealed at a GLOW panel that there were no plans for a third season, despite being at a panel that was usually reserved for something like a season renewal. “Unfortunately, we don’t have a season three,” she said.

In July, during the TCA (Television Critics Association) press day, Netflix’s vice president of original content Cindy Holland was also vague when talking about the future of original content. According to Holland, when it comes to renewing any series, data is key. “Are we getting enough viewership to justify the cost of series?” she said at the time (via IndieWire), noting that Netflix also looked at “how beloved the fan community is” and “how social the title is.”

3a. As mentioned, the GLOW ladies are heading to Las Vegas. While it’s unclear just how long this live show will last, expect to see them hanging out along the famous strip, which at the time included everything from Circus Circus to Bally’s and Caesars Palace. (Yep, these institutions have been around for a LONG time.)

3b. The show will have to get creative with its set. Per Mensch at the GLOW panel in August, “We have a lot of dreams for how we’re going to shoot the show. We’re not going to give away exactly what our intentions are… [but] Las Vegas has changed a lot since 1986, so unfortunately a lot of locations we’d like to shoot in are not there anymore.”

4. Expect most, if not all, of the main cast to return. Given the location and new setting, here’s hoping that the show will also cast actors to play Wayne Newton and Siegfried and Roy, who were basically Vegas royalty in the ‘80s with their headlining shows.

This post will be updated as more season three news is announced.