[Editor’s note: The following post contains spoilers for both “Eternals” and its post-credits scenes.]

The Marvel Cinematic Universe has never shied away from tossing major narrative bombs into its films after they’ve — quite literally — ended, but Chloé Zhao’s “Eternals” offers a few more twists to the formula. Not only does the Oscar winner’s first Marvel feature conclude with plenty of table-setting for more action to come, it does that within both the film’s primary running time (kinda new!) and in a pair of post-credits scenes (the usual land of all those late-breaking twists).

Zhao’s eons-spanning epic introduces the titular Eternals — essentially, a race of immortal beings who have been (secretly) hanging out on Earth for thousands of years — and sees what happens when their apparent dedication to the safety of Earth’s inhabitants is threatened by a wide variety of forces. That’s the short version, but suffice it to say, it ends with some of the Eternals proving victorious (and some, well, very much not), only strengthening their bond with their Earthly home.

And then Zhao and co-screenwriters Patrick Burleigh, Kaz Firpo, and Ryan Firpo throw all that for a loop, ending the film with the remaining Eternals divided, though still in service to the same idea: to find the rest of their brethren and let them in on some major secrets. It’s an exhilarating end, the kind that sets up plenty of new adventures, but one also steeped in some serious drama (what, audiences will wonder, is going to happen to Sersi, Kingo, and Phastos, who have been swept off the planet to face their very mad maker, Arishem? And what about Thena, Makkari, and Druig, who have headed out in their spaceship to wrestle up the rest of the Eternals?).

It’s plenty to ponder, and Zhao only extends that straight into a pair of post-credits scenes. Zippy, information-packed post-credits sequences are nothing new to the MCU, but Zhao handily combines both fan service and good, old-fashioned bluster to present a pair of scenes that seem poised to change both the MCU and any subsequent “Eternals” features in major ways.

[One more time: Spoilers ahead for both “Eternals” and its post-credits scenes.]

1. The Eternals Get Two New Compatriots

The first scene finds Thena (Angelina Jolie), Makkari (Lauren Ridloff), and Druig (Barry Keoghan) tooling through space in the Eternals’ decidedly slab-shaped spacecraft. All is not well, however, because the trio is worried: They haven’t heard from their earthly pals in weeks and fear the worst. They’re right to! Turns out, Sersi (Gemma Chan), Kingo (Kumail Nanjiani), and Phastos (Brian Tyree Henry) have been whisked off the planet to get a major talking-to from Arishem, their creator and also primary antagonist. That’s where “Eternals” ends, with the trio learning that Earth is about to be tested for their transgressions, kind of a risky move for concluding any massive franchise film.

Help is on the way, both in the form of the space-y Eternals realizing that they need to go back to find the rest of their family, and wait, is that Harry Styles? Yes, yes it is. Meet Pip the Troll (CGI, not Harry Styles) and his best pal, Starfox AKA Eros, AKA Harry Styles. The duo appear on the Eternals’ ship, because they too realize that something bad is happening and that they need to assist their brethren. And they are indeed brethren, as Eros refers to them as his “fellow Eternals” almost immediately. 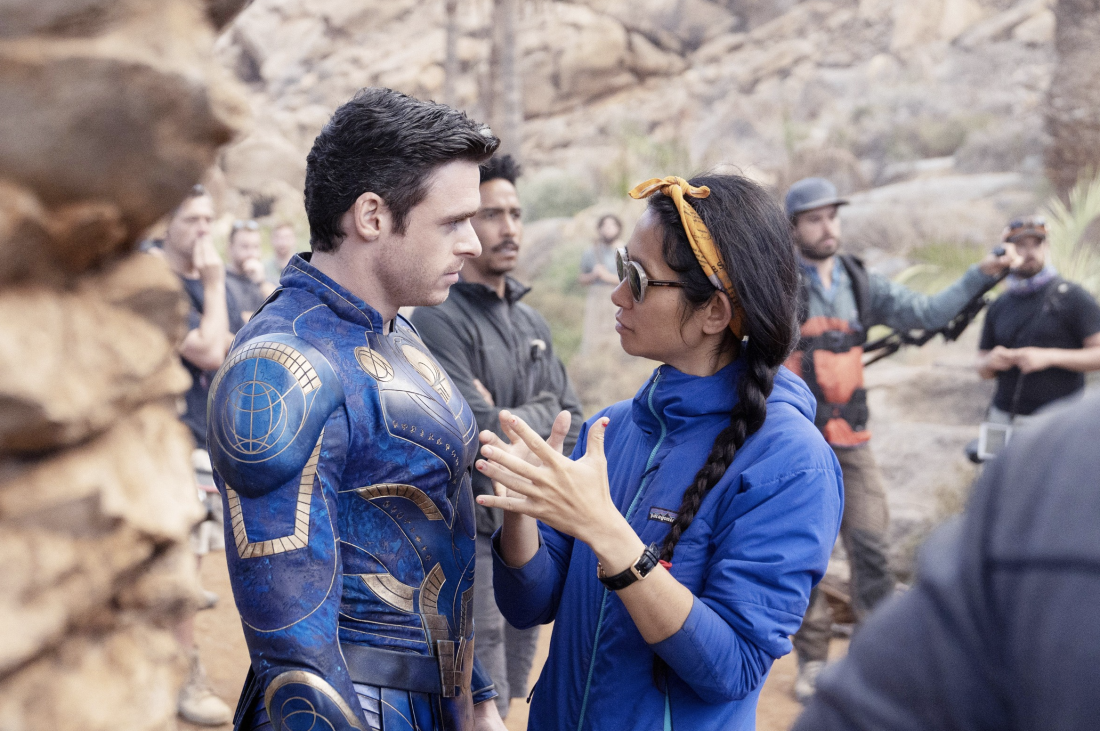 There’s plenty to unpack here, but it all stems from an original, early idea that Zhao had. “They very much wanted me to pitch to them what I wanted the post-credits to be, so I pitched the idea of Pip the Troll and Eros to Kevin [Feige] a long time ago, just when we started shooting the movie, because I loved the idea of other Eternals existing in the universe,” Zhao told IndieWire. “Once you’ve seen the film, you understand why.”

One important thing to note: Eros is the brother of Thanos (yes, that Thanos), who is also an Eternal. So yes, they are brethren. And yes, Eros knows a thing or two about beating back super-powered bad guys. Zhao dug into that very idea, stretching it out to include the very nature of the Eternals themselves.

“The fact that, in the comics, Eros was on Titan, made me think that if Eros was an Eternal, maybe Titan has similar responsibilities as Earth,” Zhao said. “Could Eros have affected someone like Thanos the way that [former Eternals leader] Ajak [Salma Hayek] has affected earthlings? And what does that mean? On top of that, how did he get away? He’s clearly just chilling.”

Pip and Eros are, in comic book lore, long-time compatriots and pals. They’re also very different, and that’s something Zhao wanted to play up, comparing them to fellow space travelers Han Solo and Chewbacca, offering a decidedly “Star Wars” vibe to the whole thing. And, from the start, Zhao said she could only imagine one human playing the divine Eros. 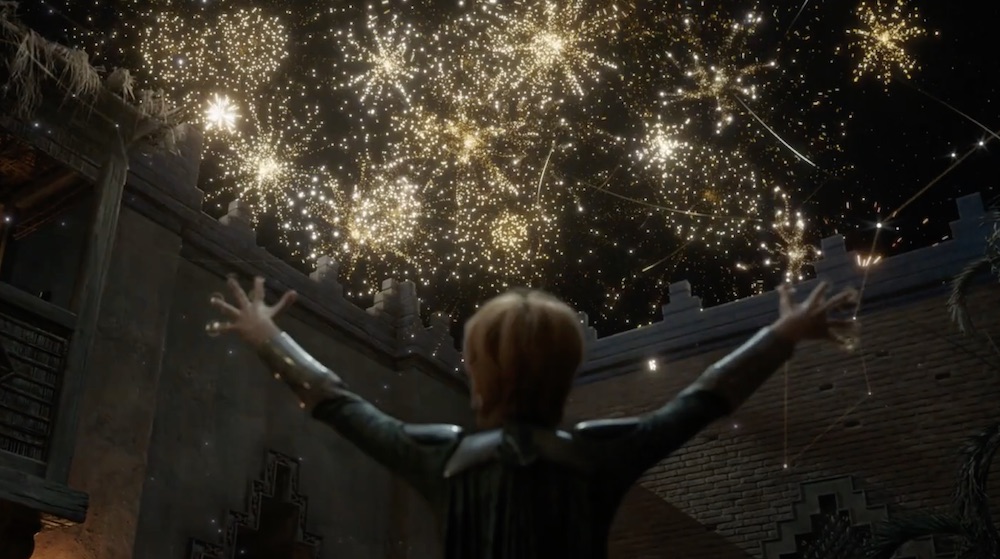 “The dynamic between Pip and Eros made me think of Han and Chewie,” Zhao said. “I thought they were very dynamic characters. When I went to pitch this, there was only one person I thought could play this, and that was Harry Styles. I saw him in ‘Dunkirk’ and kept tabs on him. I thought he was very interesting visually. So for the post-credits sequence to exist, I needed a yes from Kevin and a yes from Harry, and luckily they both said yes.”

2. Dane Grapples with His Fate

Eros and Pip are not the only new characters introduced in the film’s final moments; they’re not even the only new characters forced to grapple with the weight of their superheroic fates. While details about the film’s post-credits scenes have been floating about the internet world for weeks, one of them is not entirely surprising, if only because a minor character’s name pretty much gives it away from the start, at least to the Marvel faithful.

Early in the film, we meet Dane Whitman (Kit Harington), a good-natured schoolteacher who has been romancing Sersi for some time. Over the course of the film, Dane is privy to plenty of shocking details about the Eternals, and as the film ends, he attempts to share his own major secret with Sersi. But that’s a secret that shouldn’t surprise: “Dane Whitman” is the name of the third incarnation of the Black Knight, a long-time member of the Avengers and a classic superhero in his own right. 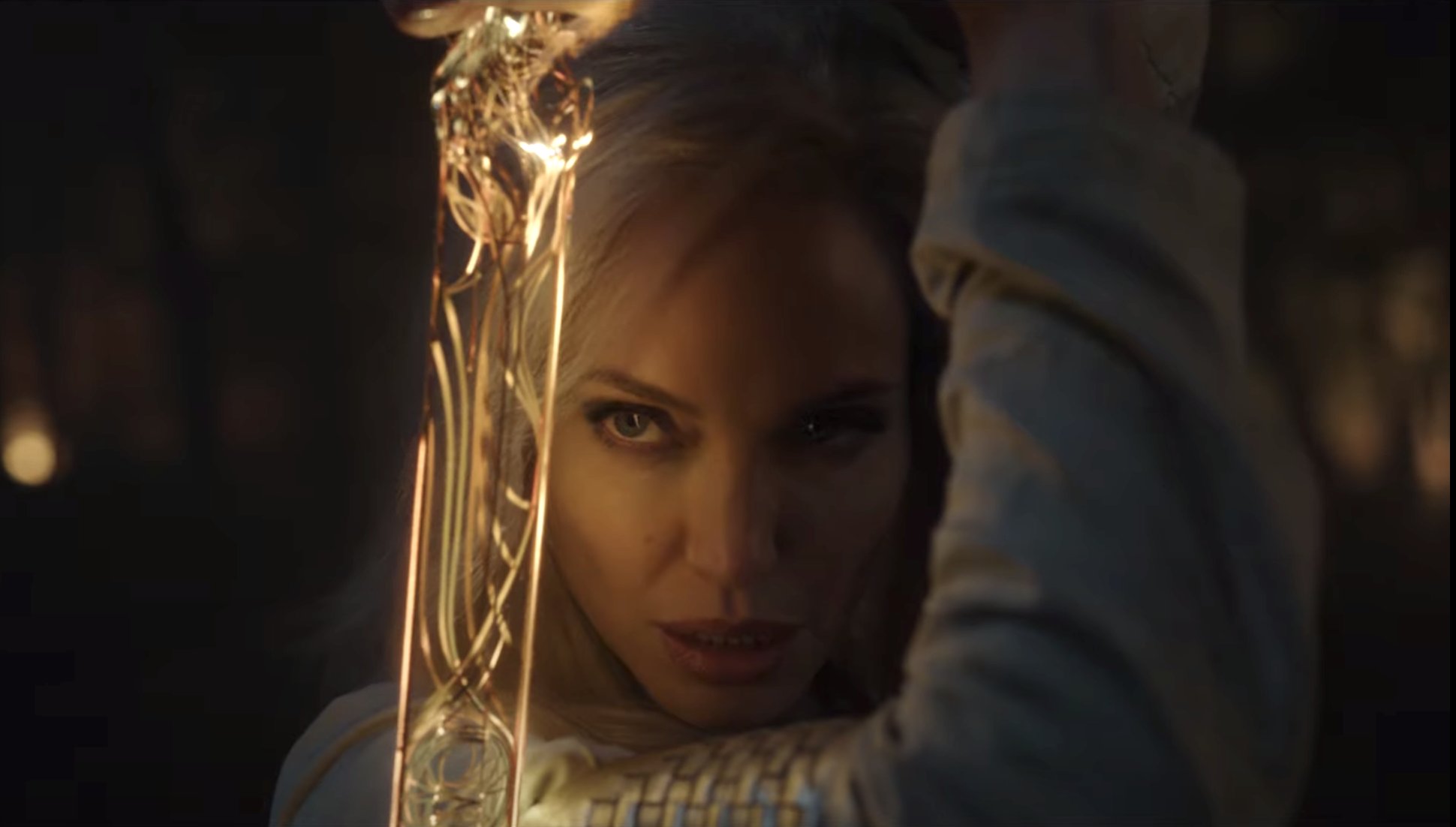 Before Sersi is swept up by Arishem, Dane tries to tell her about the weird thing he’s just learned about his own family. Before he can explain, Sersi is gone, leading directly to the final scene, in which Dane wrestles with said secret. While the exact details of this Dane’s fraught family are not dispensed just yet, the general shape of it — it’s a legacy that began in medieval England, a birthright from which Dane can’t hide, and also an excuse to wield a massive sword — is in place in just one scene.

Dane, clearly horrified by Sersi’s disappearance, stands over a large box, eventually cracking the thing open to reveal a massive sword. It’s the Black Ebony, the typical weapon of the Black Knight, and it’s even got a kicky little Latin phrase inscribed on the top of its box: “Mors Lucrum Mihi,” which he translates to “Death is my reward.” But is he actually ready for that? It’s not just the audience thinking that, there’s also a chilling voice asking it aloud. Zhao confirmed to Fandom the voice belongs to none other than Blade, who is coming to the MCU played by Mahershala Ali.  Looks like the MCU just got another new hero. And, as a closing title card tells us, “the Eternals will return,” and this time, they’re going to have even more help.

“Eternals” is now in theaters.