Derry Girls fans are in for a treat, with Channel 4 releasing a first look teaser of season 3.

It’s a very brief clip, but the footage has teased the deep trouble the gang are going to find themselves in for the last episodes – and we can’t wait.

In the new year, the final season of the hit comedy is set to be launched, with Saoirse-Monica Jackson, Nicola Coughlan, Louisa Harland, Jamie-Lee O’Donnell and Dylan Llewellyn reprising their roles as Erin, Clare, Orla, Michelle and James respectively.

The group have been the cause of multiple nuisances in the past, from being caught red-handed pretending to witness a miracle to accidentally setting fire to the flat above the chippy.

Now, it seems that they’re going to have a run in with the law, with the friends being cornered by a police force, complete with what appears to be a SWAT team of sorts.

In the teaser, a police van pulls up with officers descending on ropes from above, as one man in charge states: ‘Put your hands in the air, slowly turn around and place your palms flat against the wall.’ 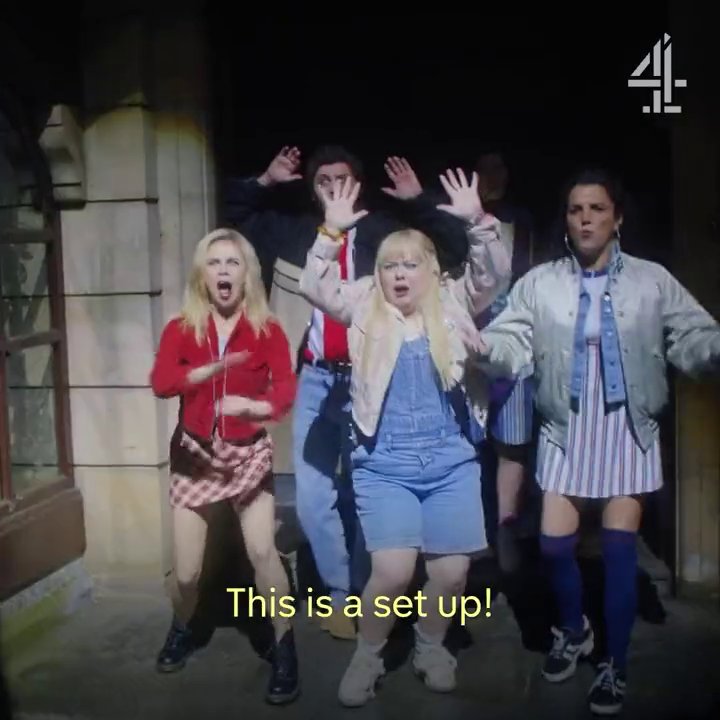 With multiple guns pointing at them, Erin yells out: ‘This is a set up!’

Meanwhile, Clare – always terrified of putting a foot wrong – shouts: ‘You have my full cooperation sir!’

Michelle reacts disdainfully to Clare’s declaration, as James raises his hands high in the air with Orla beside him.

What they could have done to warrant a full police operation apprehending them is definitely going to be entertaining to find out.

Fans were overcome with excitement over the new glimpse of the show, with one tweeting: ‘SCREAMING CRYING THROWING UP.’

‘Oh yes!!!!!!!!! #DerryGirls looking forward to this!!!!!’ another wrote, while someone else commented: ‘Screams in Derry Girl.’

Earlier this week, Bridgerton star Nicola bid an emotional farewell to the sitcom after she filmed her final scenes.

Sharing a polaroid photo of her taken on set, she tweeted: ‘Goodbye Derry Girls, it’s been quite a ride.’

Derry Girls follows a group of Northern Irish teens growing up during The Troubles.

Announcing the news that the series would be coming to an end after the third season, show creator Lisa McGee said: ‘It was always the plan to say goodbye after three series.

‘Derry Girls is a love letter to the place I come from and the people who shaped me. It has been an honour to write it and I will be forever proud of everything it’s achieved. I’d like to thank the people of Derry and Northern Ireland for getting behind us.

‘Who knows if Erin, Clare, Orla, Michelle and James will return in some other guise someday, but for now this is it for us and we’re excited to start filming this series with our incredible cast and crew to hopefully take our loyal fans on one last adventure.’

Derry Girls is available to watch on All 4 with the new season due to be released in 2022.