Emmerdale‘s Gerry Roberts could be in for a huge shock next week as he starts investigating Lachlan White’s strange behaviour.

Gerry (Shaun Thomas) grows suspicious of his friend after Lachlan lets something slip about the tragic car crash that killed Chrissie and Lawrence.

Viewers know that Lachlan (Thomas Atkinson) was responsible for the deaths of his mother and his grandfather when he grabbed the wheel of the family car, placing them in the path of an oncoming lorry.

This fortnight, we’ll see Lachlan tell Gerry something about the crash which sends his best mate’s mind into overdrive. 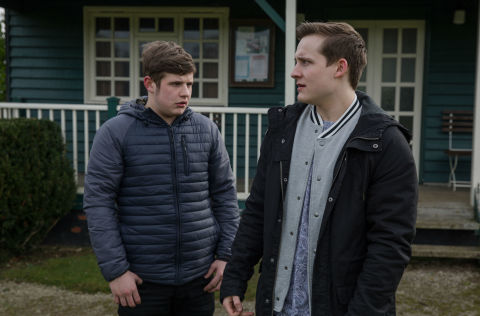 Gerry can’t resist questioning Lachlan on what he’s revealed, but with the scheming teen now regretting being so honest, he gets upset and urges Gerry to drop it.

Although Gerry agrees not to pry any further, he can’t shake his suspicions and eventually tries to retrieve the deleted voicemail message that he received from Lachlan on the day of the crash.

Gerry does manage to get the lost message back, but what will he hear? Will he finally uncover Lachlan’s guilt?

Emmerdale airs these scenes on Monday, May 7 at 7pm on ITV.