Emmerdale has revealed that the fireworks between Bob and Brenda Hope are just getting started.

The couple finally broke up in Thursday evening’s emotional double bill, just a few hours after tying the knot in a ceremony at the local church.

These brand new spoiler pictures now offer a first look at the aftermath, as Bob (Tony Audenshaw) and Brenda (Lesley Dunlop) meet for a showdown.

When Bob comes face-to-face with Brenda for the first time after she ended their very short-lived marriage, tensions run high and emotions spill over. 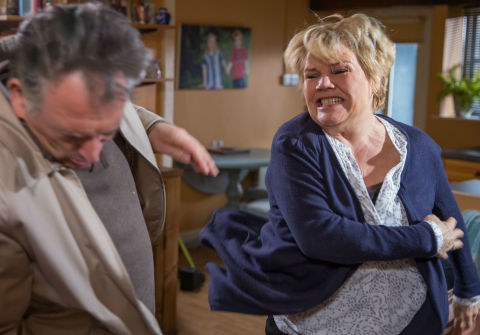 As the pictures show, Brenda even turns violent with Bob by slapping him across the face as she takes her frustrations out on him in an angry outburst. But what has Bob done to make everything worse?

The pair’s split came when Brenda realised that Bob was settling for second best by marrying her.

The penny dropped when Brenda took a look at photos that Bob’s son Heath had taken throughout the day, which saw him looking troubled and unhappy when he didn’t realise the camera was on him. 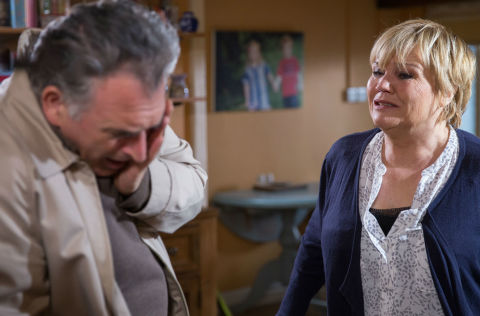 It’s clear that Bob still hasn’t moved on from his fling with Laurel Thomas, but is the road now clear for them to get together properly?

Emmerdale airs these scenes on Friday (May 11) at 7pm on ITV.

Digital Spy Soap Scoop video – hit play below for all the latest Emmerdale spoilers, as a shock death rocks the village, and Amelia’s biological father is revealed.