Tonight’s hour-long special of Emmerdale (June 15) saw the Amelia Spencer saga intensify as her family spoke out publicly about her disappearance.

After making an appeal on TV, the Spencers were told privately by the police that Daz is the main suspect.

While we have some of our own theories, fans mostly seem to agree that Daz is responsible for Amelia’s kidnapping.

Amelia hasn’t actually been seen in the village since June 1, but CCTV footage recently showed her alive and well with a mystery woman.

Elsewhere in the episode, fans were left on tenterhooks as it was revealed that Chas and Paddy’s baby kicked. 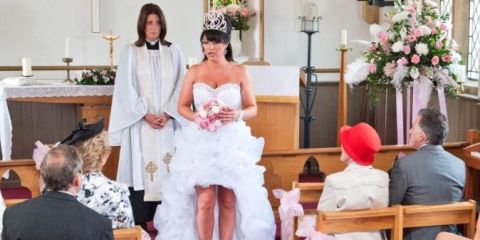 This comes after the couple were told the devastating news their little girl had no chance of survival.

Also shocking fans, Brenda and Doug shared two kisses, which is a slightly awkward situation because Doug is actually the dad of Brenda’s recent love rival Laurel, plus, you know, there’s also the fact that Doug is with Diane and all.

Digital Spy Soap Scoop video – hit play below for all the latest Emmerdale spoilers, as Lachlan prepares to strike again and suspicion turns to Daz over Amelia’s disappearance.