Emmerdale has revealed that Lisa Dingle will return to the village next week.

Lisa made an abrupt departure last month after realising that arguing with her partner Zak was becoming bad for her health.

Lisa reappears on Monday (May 7) following her daughter Belle’s mental health relapse, which comes to a head in this Friday’s episode as concern grows for her wellbeing. 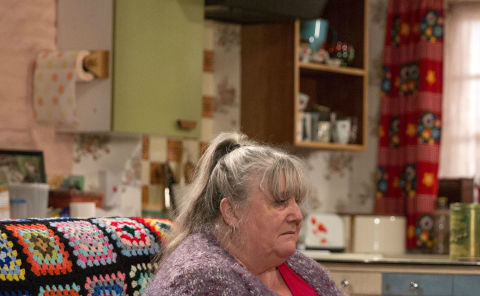 When Lisa arrives back in the village, it’s clear that there’s plenty to talk about after everything that’s happened in her absence.

Zak also gets emotional as he admits how much he’s missed Lisa, but can he convince her to stay or is this just a flying visit?

Lisa headed out of Emmerdale after suffering a terrifying angina attack following a row with Zak over Liv Flaherty’s Youth Offenders sentence.

Following some advice from the doctors, Lisa decided that she needed to avoid further stress for the good of her health.

Jane Cox, who plays Lisa, recently told us: “Lisa decided to leave because of her health condition. She knew that if she stayed for any longer, it wasn’t going to be good for her. Being around Zak is not good for her health.

“Lisa has not been able to do anything to resolve the situation with Liv and she’s very upset that Liv has been sent down. But the fallout of that is Zak has been vile to Lisa and not supported her at all. Aaron’s had a go at her too, so everyone’s against her.

“That’s what made Lisa have the angina attack. The doctor told her that she had to calm down to get away from the stress, because it wasn’t doing any good for her at all.”

Emmerdale airs these scenes on Monday, May 7 at 7pm on ITV.