Emmerdale’s Ross Barton vowed to take matters into his own hands tonight (April 14) after his attacker Simon McManus walked away without punishment.

Tuesday’s scenes saw Ross (Michael Parr) desperately hope that justice would be served as he headed to court for Simon’s trial in the acid attack case.

As Ross prepared to face Simon for the first time since the attack, he also had to face the very real possibility that his brother Pete wouldn’t be there to support him following Rhona’s revelations.

Thankfully, Rhona managed to persuade Pete to look beyond Ross’s mistakes and be there for him regardless – admitting that she couldn’t have got through her own court case alone. 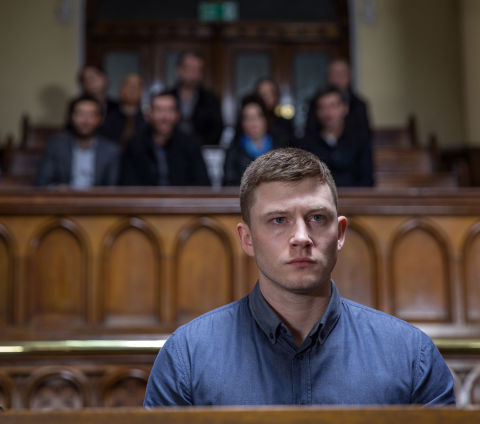 With this in mind, Pete was by Ross’s side as he took to the stand to give evidence – reliving his harrowing ordeal and how it’s changed his life.

But despite Ross’s bravery, he was soon dealt a crushing blow when the judge explained that a key witness had died – throwing the case into chaos.

Although the witness’ statement was read out anyway, it sadly wasn’t strong enough to secure a conviction and the judge later delivered a non-guilty verdict to Simon.

Devastated by the outcome, Ross vowed to take matters into his own hands and track Simon down himself. But what is he planning? And will anyone be able to stop him?