Like so many other home-bound Netflix watchers, I inhaled Darren Star’s Emily in Paris like a warm, buttery croissant in one Saturday night sitting. Its escapism is the perfect salve for this seemingly endless pandemic. I was enchanted by the sweet cafes, stunning historical architecture, food shots, and rotating lineup of Chanel bags on Emily’s arm. And yet, by the end of the series, I found myself bothered and irritable, almost weepy. I was feeling…terribly jealous.

Of course, I know Emily’s a fictional character. And I am painfully aware that she inhabits a carefree time before face-masks, hand-sanitizer, and an overwhelming sense of doom became tentpoles of our days. I’m also aware that some women might find it improbable, if not impossible, to strut across a metropolis in five-inch stilettos or throw back champagne like it’s water without even the slightest hangover. I can accept all of this as make-believe.

But perhaps the most fantastical fantasy of all, the thing that left me feeling uneasy, was how inappropriate workplace behavior—the very stuff the #metoo movement was made of—was portrayed in this series. Whether Emily is calling out her marketing agency’s client Antoine for gifting her lingerie or she’s taking issue with his latest nude-model-focused perfume campaign shoot, every time she confronts this dude (who is very much in the position of power), he listens. And she walks away with both her respect and her career wins, completely unscathed.

So after watching this series, as we approach the three-year anniversary of the #metoo movement (the hashtag went viral on October 15, 2017), I am left with one big question: Is Emily in Paris all just fluffy TV fantasy, or is it a reflection of meaningful changes to how harassment is handled in the workplace post-#metoo?

When I look back at my own twenties, spent in the also fantastical-at-the-surface world of an actress in Hollywood and New York, the memories are laced with deep scars. As much as I’d like to think those scars have ultimately made me stronger and have given me a greater sense of empathy, the truth is that they’re extremely hard to bear. And the memories always come back to him, I hate that it is so. Yes, him. On my twenty-fifth birthday, in Cannes, France, I was assaulted by Harvey Weinstein. When I asked to keep things professional, my words meant nothing.

Even the side jobs I took on to pay the bills could be brutal. I dressed up as Cinderella for little girls’ birthdays, and sometimes a dad would pull me aside and ask, “You ever do adult parties?” When I worked as a personal assistant to a hedge fund manager, he propositioned me $20,000 a month and my own nice apartment for sex. I turned it down and returned to my studio apartment to cry on a pile on dirty laundry. I felt powerless, and after six years in Hollywood, I got used to that awful feeling. I started to believe that my utopian feminist theory classes at Vassar were B.S., because clearly, the world was ruled by men, some of whom weren’t so good.

But everything always works out for Emily in Paris.

Take the time she arrives outside her Parisian apartment and is met by a young man from the rental agency, Gilles Dufour. He helps her with her bags and shows her to her top floor “chamber de bonne.” When he asks her out for a drink, she tells him she has a boyfriend in Chicago. Gilles Dufour coyly responds, “So you don’t have a boyfriend in Paris.”

“Can I just have my keys, s’il vous plait?” Emily gets to the point.

A relentless Gilles hands her his card in case she changes her mind.

When (post-breakup with the Chicago boyfriend) she meets a guy at a party and he romances her along the Seine River. After they kiss, he crudely whispers in her ear, “And I like American pussy.”

Disgusted, Emily breaks away from him. “And I’d really like to go home—alone.” And she disappears into the sparkling Parisian night, immediately rid of him and any threat of pushiness or aggression. Of any threat, period.

In some ways, watching a show depict these situations as if you could just say the right thing and fix it made me feel worse, like, “How did I get it so wrong?” But then I remember what #metoo showed us. Women didn’t get it wrong; the world around us did.

And when it comes to this particular (fictional, glamorous) world constructed by Hollywood—the same industry that protected Harvey Weinstein—you have to wonder whether there’s some incentive to put forth a new version that looks better than reality. Perhaps this vision of what should happen when a man realizes he’s making a woman uncomfortable hits too close to home and that’s why it stings.

Emily’s world is full of jet-setters, hoteliers, fashion designers and famous people, a perfect breeding ground for bad behavior—though of course, none of the glitz and glamour is a prerequisite for abuse. Is her safe, harassment-free life all just an escapist fantasy? 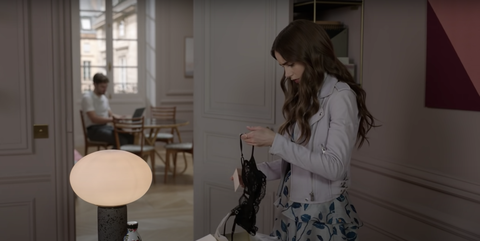 Well, yes. For one thing, it’s important to mention that Emily is a cis white woman working in a white collar career. This affords her certain protections like access and power that are not necessarily afforded to women in lower wage jobs, which women of color and immigrants often hold.

Then there is the bleak reality that the isolation of the pandemic has caused an uptick in domestic violence and a potential increase in sexual harassment because people are more likely to be alone in their workplace. It’s been reported that sexual violence increases during crises, as well. Coming as a surprise to absolutely no one, these systemic problems still very much exist in 2020.

Yet, there is no doubt #metoo has shifted society. I see it anecdotally: A friend of mine, who works at a law firm, was recently groped by one of the partners. With the support of her male and female colleagues who witnessed the assault, she reported him to HR. The firm took the accusation seriously and the partner was fired without his multi-million dollar bonus. This never would have happened before #metoo. And we see it in the news; laws are changing. Many states are passing legislation to extend statutes of limitation, end or limit nondisclosure agreements (NDAs) and improve rape kit testing. And in a recent survey from the online dating company Match, sixty percent of singles said the #metoo movement was important to them and forty percent of the men surveyed said that the movement changed their behavior at work.

Statistics aside, I’d like to think that Emily’s bold voice has something to do with the changing tides and the fact that people want to see strong women treated with respect.

People do often mimic what they see on their television screens. And vice versa—TV shows are very much aware of their audience. So while I found watching the overly-optimistic-way #metoo was portrayed in this series to be triggering and painful, it also left me with an ounce of hope that maybe this particular “fantasy” could eventually become a reality.