Revealing the story to Holly Willoughby and Phillip Schofield on This Morning today (April 30), the actor recalled that he was hosting Top of the Pops at the time.

“Basically, I was hosting and Mariah Carey was here,” he said. “She finished performing and this guy came up and goes, ‘Yo man, Mariah wants to meet you, come on!’ 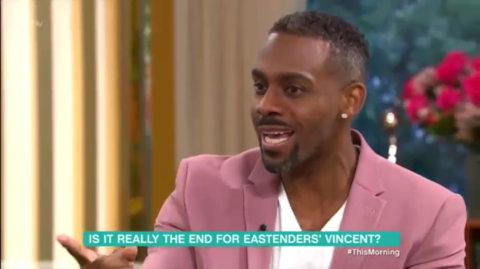 “I knew what was going on here, but at the time I was going out with somebody who was very dear to me who was a Mariah Carey fan. And I knew – I wasn’t the best guy back then, so infidelity, I didn’t really adhere to back then. I was a different person.

“But I knew there was no way I could do anything with this woman, knowing that my partner – I mean, she had posters.”

Blackwood continued: “Literally, I looked at her and she’s like, ‘Are you coming to my party?’

“And the devil’s on my shoulder telling me, ‘Go go go’, and the angel is going, ‘No, you can’t do that’. So basically I said, ‘My girlfriend is a big fan’, and she looked at me and went, ‘Girlfriend?’

Blackwood’s partner at the time was elated to speak to Mariah on the phone – but according to Blackwood, Mariah was less than impressed.

Also on This Morning, Blackwood spoke about his exit from EastEnders, suggesting that he would be open to a Vincent Hubbard return.

This Morning airs weekdays from 10.30am on ITV.