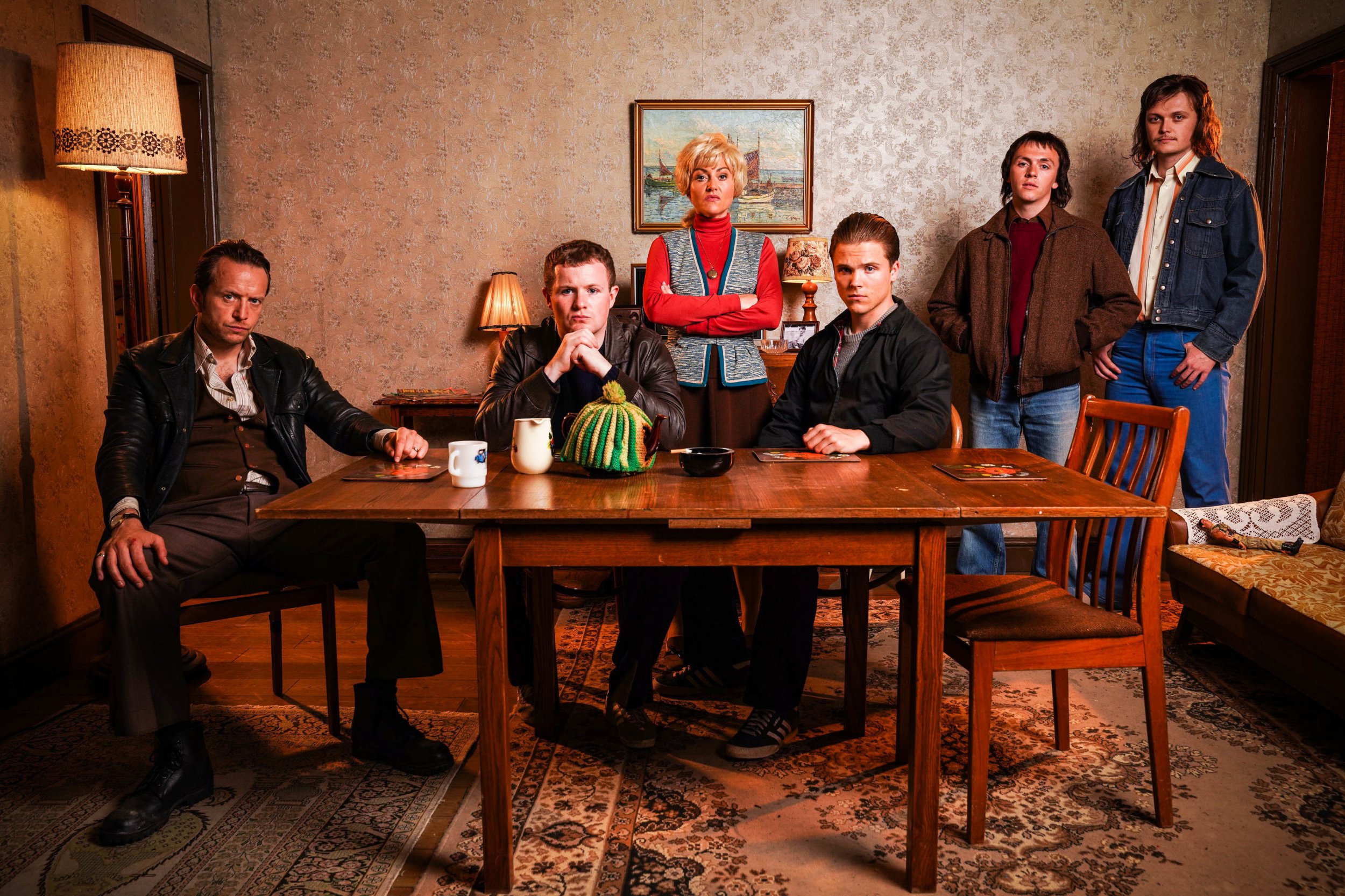 EastEnders takes a trip back in time tonight (Monday, September 5) with a special flashback episode charting how the iconic Mitchell family came to be the legends that they are today.

Present day episodes have seen Phil Mitchell (Steve McFadden) being put under duress by DCI Keeble (Alison Newman), insisting that he inform on a number of his former associates.

Phil, however, knew that the detective’s vendetta against him was more personal, and thus he ordered her to reveal her true intentions last week, leading to quite the discovery.

The identity of the person Keeble really wants information on remains a mystery, but it’s this secret that ultimately takes viewers down memory lane for a trip to 1979.

Fans will have the rare opportunity to see the Mitchell clan as we’ve never seen them before, as they’re hit hard by Britain in economic turmoil during the Winter of Discontent.

Peggy is at the centre of the tale, and before she was landlady of the Queen Vic, she had her hands full keeping a busy household, while also doing everything to keep her marriage afloat, as the cracks began to show.

Phil, meanwhile, secures a job at a garage, and upon learning this information, Eric – who has never before been seen on screen – decides that it’s time to take both he and Grant out on their first ‘job’.

Expect some shocks and twists, in this truly historic episode of EastEnders, which features a cast so incredible you’ll be immersed in this pre-Walford event TV from the get-go.

But who plays who?

Peggy Mitchell will be played by Jaime Winstone in this one-off flashback episode of EastEnders.

Jaime is best known for having played Dame Barbra Windsor in biopic Babs, thus making her the ideal candidate to take on the legendary role of Peggy.

In addition to Babs, the 37-year-old has starred in films such as Kidhulthood, Made in Dagenham and Tomb Raider, as well as TV shows Dead Set and After Hours.

‘It’s been such an honour to step into Peggy Mitchell’s shoes for the first time, and into Barbara’s shoes for the second time,’ said Jaime on playing Peggy. ‘There’s certainly a healthy amount of pressure when you’re taking on such an iconic role – I thoroughly enjoyed it.

‘Playing this role has really cemented my love and admiration for Barbara as I got to bookend my journey by playing Peggy Mitchell – I hope I’ve done her justice and I’ve loved every minute of it, I can’t wait for everyone to see the episode.’

Daniel Delaney portrays Phil Mitchell in the special EastEnders flashback episode, and watching him in action you’d be forgiven for thinking he’s actually a young Steve McFadden in a classic episode of the BBC One soap!

‘I was elated [when I got the part]!’, said the star. ‘It was an honour to get the part of such an iconic character.

‘I think it’s an exciting time for not only EastEnders and fans but for everyone in general. Just to be involved in a project like this is huge. I used to watch EastEnders quite a lot, religiously after school.

Daniel has previously appeared in TV series We Are Lady Parts, and short films Sensational Timmy and Lady Parts.

We suspect you’ll be seeing a lot more of him in the future!

Grant Mitchell is played Teddy Jay, and much like Daniel does with Phil, he becomes a younger version of his character seamlessly, with the mannerisms and voice so on point its actually uncanny.

‘I wanted to bring some familiarity to the audience when they see me as younger Grant,’ said Teddy. ‘There is a huge pressure when taking on a well-known and loved character.

‘Steve McFadden was on set and gave me some really valuable advice on possible ways of playing the role.

‘Watching back old footage was something that really helped me delve into the life of Grant. I think talking to Steve and Toby [Frow] the director helped me contextualise the role of Grant as he was at the age of sixteen.’

Eric is played by George Russo, who has appeared in many TV series’ including Doctors, Holby City, Call The Midwife and Doctor Who.

He also popped up in EastEnders back in 2000, playing an unnamed youth.

Eric Mitchell, as longtime fans will know, has been often referred to in EastEnders but has never appeared on-screen before now, making this a huge moment for the character.

‘I would say that he is menacing ,’ explained George. ‘he’s got some issues. When you play a part like that you sort of have to find some sort of sympathy for the character you’re playing otherwise you play it at all one level, and one tone, with no layers.

‘Not to make excuses for him, I think he’s come up hard and made bad decisions and he takes that out on his family.

‘He’s in this sort of emotional pain and it comes out sideways and his family suffer because of his bad decisions. He is resentful as well. For me it was exciting because I had a lot of scope and room to play and develop the character.’

Billy Mitchell is played by actor George Greenland during this historic flashback episode.

‘I was so excited when I got the role,’ said George. ‘Perry has been doing it for so long, so there is so much material for reference for how Billy ends up after we see him in this episode.

‘I was watching loads of clips from old episodes, Billy Mitchell best bits. That was great for mannerisms and listening to his voice and trying to get the right tone to my voice.

‘So there was loads of material out there and I did lot of research on his upbringing and what’s happened to him before we meet him in this episode.’

Billy’s brother Charlie, much like Eric, is a character who have not seen on screen before.

Charlie is played by actor Charlie Hepinstall, who said that not having seen the character before allowed him to have ‘freedom’ when taking on the role.

‘It was really cool to be able to do what I wanted within the boundaries of what the director was saying. As a Mitchell, he shares traits with his brother, he’s always there and loyal to the family.

‘He still goes and does naughty things, but he is more free, not seriously clued into what’s really happening. Charlie would walk into the room with family drama and see some food on the table and be like “Oh ok, let’s eat.” [laughs].

Once Upon A Time star Rose Reynolds takes on the role of Glenda Mitchell.

Glenda, as viewers know, is Ronnie and Roxy’s mum, and she has featured numerous times in the BBC One soap over the years, with Dempsey and Makepeace and Hollyoaks star Glynis Barber playing the character.

Rose – who is best known for having played the dual roles of Alice and her Storybrooke counterpart Tilly in Once Upon A Time – revealed that we find out in the EastEnders flashback that Glenda’s marriage to Archie wasn’t a happy one.

‘We see her interactions with Peggy and Archie but also we see very young Ronnie and Roxy who are played by some very gorgeous children,’ she said. ‘Glenda is not happily married.

‘It’s so nice to see how characters become the way they are; we always love to see that. I think when we meet a character halfway through (life) we can assume this and that but to see it fleshed out in this episode is just great.

‘When I was doing my research for Glenda and particularly her relationship with Peggy, I found that there are lines in our script that have been taken directly from thecharacters’ first meeting in the old script!’

Archie Mitchell – played incredibly by Larry Lamb for years – will be portrayed by Henry Garrett in tonight’s throwback outing of the serial drama.

Henry has appeared in Doctors, Holby City and even EastEnders in the past, playing a character named Dean in 2008, but he is perhaps best known for his starring role on AMC series The Son.

Discussing his upcoming EastEnders role, he said: ‘Hearing about the episode I thought it was a really cool idea. I really commend the EastEnders team, I think it’s great that there is an environment there for trying new stuff and for being brave and creative.

‘It’s such a huge and popular show, why change the formula? So it’s exciting and brave, and I think the way it was executed was top class. We had rehearsal time, the dialect coach, fantastic costumes; everything was put together with so much care and detail.

‘Then the EastEnders world is such a rich world to dive into. I can confidently say that all the actors involved in this episode felt extremely privileged.’

The role of Stephen, who has also never before been seen on screen, will be played by Dean Roberts.

Dean has appeared in numerous TV series’ over the years, including White Gold, Rellik and Call The Midwife.

He also appeared in EastEnders back in 2013, portraying bailiff Rob Topp.

‘I didn’t really know too much about Stephen, I had to learn a lot about his character based on other people’s opinions and I had done a lot of research on Billy when he first entered the show,’ said Dean.

‘It’s interesting what Peggy says about him – that she’s not too fond of that branch of the family. He seems to have a better relationship with his cousin Eric, they are like partners in crime.’

EastEnders airs this history-making flashback episode on Monday September 5 at 7:30pm on BBC One.