One eagle-eyed The X Factor viewer has spotted a pretty awkward exchange between Bella Penfold and Scarlett Lee during Sunday night’s episode (November 18).

It was a rough results show for Simon Cowell, who lost not only one but two of his acts when Bella Penfold and Shan Ako were sent home, just ahead of next weekend’s semi-final.

However, as one Twitter user has pointed out, Bella looked pretty surprised to be the one heading home ahead of her fellow girls category act, Scarlett.

Check out the awkward video below:

Despite her apparently surprised expression, Bella took her elimination from the competition rather well.

Speaking to presenter Dermot O’Leary after her exit, she said: “Do you know what? I’ve had the most incredible journey and it wouldn’t be the same without any (of my fellow contestants).

And, it’s funny she said that — since Simon once again helped change Bella’s life with a cheeky little rule change he made at the end of Sunday’s episode. 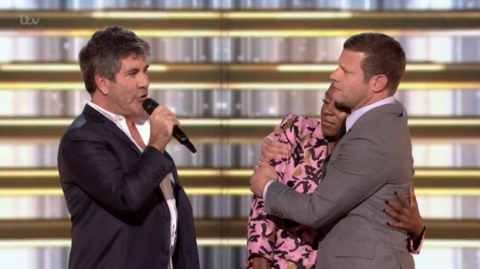 Speaking after Bella and Shan’s exits, Simon revealed that he would now be putting eight acts on the 2018 X Factor live tour, instead of the normal six, so that Bella and Shan will now get to feature.

The X Factor continues on Saturday (November 24) on ITV.