Each week, Benjamin Law asks public figures to discuss the subjects we're told to keep private by getting them to roll a die. The numbers they land on are the topics they're given.

This week he talks to Osher Günsberg. The 44-year-old host of TV's The Bachelor and Bachelor in Paradise is also a board director of the mental health charity SANE Australia, and author of the memoir Back, After the Break.

How much money do you make?

A blessedly comfortable amount. Before the global financial crisis, when TV had different budgets, I was very different about money. I was hosting Australian Idol, a massive show, and being an idiot: "I can't possibly fly economy to Los Angeles; I simply must fly business." But I was unemployed as recently as six years ago and paying rent out of my savings for nearly a year. 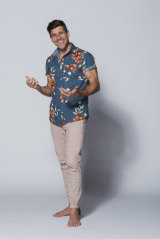 “My wife Audrey busts me every night: I look in the mirror and go, ‘This is my body now.’ I have to rewrite that neural pathway.”Credit:James Brickwood

What led to you being unemployed?

There was a period from around 2002 to 2005 where people were just bashing down my door, wanting to employ me. I just arrogantly expected that that would continue without any effort on my part. Then I moved to the US to isolate myself from all those people knocking on my door, expecting it would continue – and put no effort into managing, nurturing and nourishing relationships with people who wanted to employ me. Eventually it all just dried up. At the end of 2012, I lost two jobs on the same day. There I was, living in the States, with no universal health care, nowhere to go, no one to turn to, nothing on the boil. It was a tough lesson to learn.

But a healthy one?

Why did he say that?

He goes, "Those things are getting out of the way so something bigger can come into their place." He was right, but I had to take an active role in creating the next thing. I went to the American equivalent of Officeworks, bought a whiteboard and wrote a new format for a dating show. I came down to Australia for my cousin's wedding, and while I was here I pitched the show to Network Ten. We went into pre-production and a couple of weeks later I got a phone call: "You wanted to host a dating show for about 10 weeks at a time, right? Would you like to host The Bachelor for 10 weeks?" Work creates work.

Does hosting The Bachelor, The Bachelorette and Bachelor in Paradise mean you're a professional pimp, in your own way?

Oh, I wouldn't say that! I'd use the word "Cupid". Picture me naked with wings and a bow and arrow.

Well, that photo shoot's coming up after this interview.

As a kid, how did you learn about sex?

I had the good fortune – or misfortune – to have two doctors for parents. When we kids asked a question, the answer was clinical. Robust. Very thorough. [Laughs]

No, I was fine with it! But I do remember going to school and going, "Do you know the ovum gets released on this day of the cycle, then tiny little hairs move it along the Fallopian tubes." And someone goes [high-pitched voice], "Don't be fuggin' stoopid! Babies happen when mummies and daddies rub tummies!"

Does that mean you were prepared for sex once you started having it?

No. I got really hung up about sex. [In the 1980s], my mum worked as a civilian doctor in the Australian Army. She got there and was mortified to discover there was little focus on STDs at that time, even though it was mostly 18- to 25-year-old men and all the guys did was work out and have sex. When we asked Mum questions after that, we got answers … but this time with pamphlets. [Laughs]

Very crusty diseases. When I was 12 or 13, Mum came home and said, "Oh, I saw this poor boy today. It was his 18th birthday and some of the other boys bought him a prostitute" – this was 1985, a different Australia – "and he comes in and sees me. Poor boy's never had sex before, and now it looks like his dick's been dipped in cornflakes." [Laughs] I said, "What do you mean, Mum?" [Whistles] Out came the herpes pamphlet. And we were just like, nooooo. So when I started having sex, I was very hung up about it.

You're the first vegan cover boy of Men's Health. How comfortable are you with being a sex symbol?

It's interesting. It plays into all kinds of body dysmorphia for me, because I was quite fat when I was younger: in Weight Watchers when I was eight; 112 kilos when I was 17. My wife Audrey busts me every night: I look in the mirror and go, "This is my body now." I have to rewrite that neural pathway.

Do you feel sexy these days?

I feel sexy when I see a glint in my wife's eye. If I feel desired by her, then I feel fantastic. Even when I was on meds [including antipsychotics and an antidepressant] and 20 kilos heavier than I am now, she still had that look in her eye. I cannot be more grateful for that.

How do you want to be remembered?

I'd hope people would be like, "He was an okay guy [pause] … Anyway!" At the end of the day, what's someone going to do after they hear you've died? They'll go, "Oh, that's a shame. Anyway, do you reckon the new True Detective is ready to be downloaded?" That's what happens! Part of me thinks that's actually pretty cool. It shows you that life goes on. If you really want to have an impact on people's lives, you've got to do it here and with them, right now.

To read more from Good Weekend magazine, visit our page at The Sydney Morning Herald, The Age and Brisbane Times.