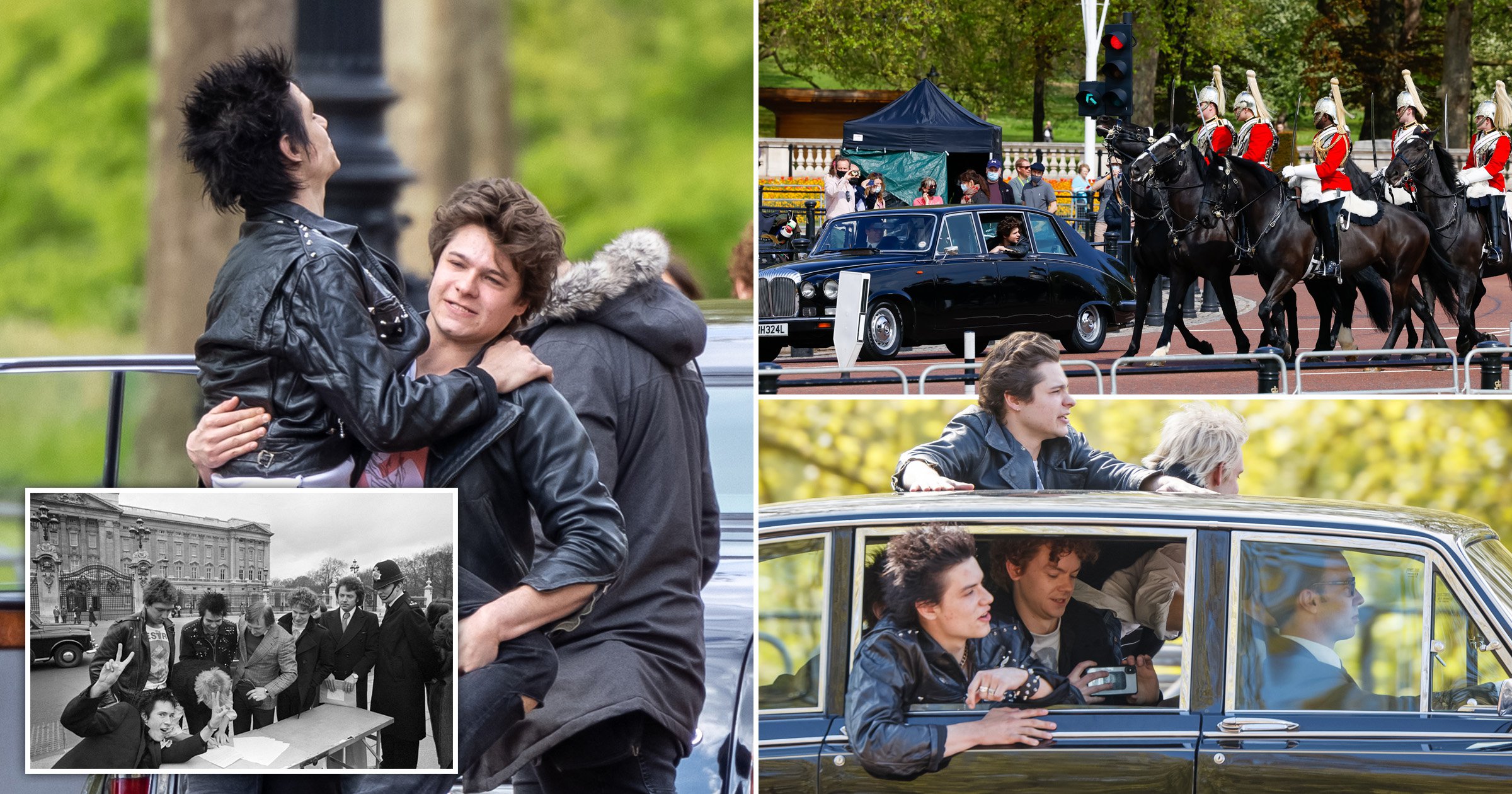 The cast of Danny Boyle’s Sex Pistols are officially in their God Save The Queen era as they were spotted heading straight for Buckingham Palace – and causing a bit of chaos on their way.

Would we have expected anything else?

The stars were joined by the Household Cavalry and the police as they bundled in a vintage car, hanging out of the windows and the roof.

Toby Wallace, who’s playing Steve Jones, was pictured having a conversation with a police officer atop a horse, while he attempted to pick up Louis Partridge, who’s starring as Sid Vicious, in another shot.

He joined Anson Boon, who’s starring as frontman Johnny Rotten, and Jacob Slater, who’s playing Paul Cook, with the gang looking every inch the punk icons as they donned leather jackets and took on their characters’ distinctive features.

As well as larking about and wreaking a spot of havoc, the lads were seen bundling into a car away from the crowds as they re-enacted the famous moment.

In 1977, the Sex Pistols held a highly-publicised press ceremony outside Buckingham Palace, celebrating the signing of their deal with A&M Records.

They went on to release their hit record God Save the Queen.

While John Lydon, formerly known as Johnny Rotten, has spoken out against the series, Jordan is involved as a consultant.

Previously speaking to Metro.co.uk after shots emerged of Maisie recreating the scenes of her riding a bike bra-less down the street, Jordan said that the actress had found the whole experience ‘liberating’.

‘She’s delighted, she absolutely loves it!’ Jordan said. ‘Before the first time I met her, she’d already read my book, Danny Boyle had as well. She’d got some background on me, so she’d obviously done a lot of work that way.

‘We’ve had some really good talks about personal things – lifestyle, my childhood, just embellishing on what the book says, really. It’s a credit to her, that’s why she’s become such a good actress, a well-known actress from humble beginnings.’

‘She’s so engrossed in it,’ Jordan explained. ‘She sent me a message saying, “I’ve been riding down the street on a bike topless and I feel liberated.” Danny very early on said that’s one of the scenes he wanted her to depict.’

The cast have also been spotted filming a moment between Sid and Nancy, who died within two years of meeting each other, and getting into character as they flipped off cameras while on set.

Production on the drama began in March, with pictures also showing the actors taking to the stage as the band for the very first time.

The show will tell the Sex Pistols’ story, from the band’s early days in West London, to their rise to fame and connection with Vivienne Westwood and Malcolm McLaren’s infamous Kings Road SEX shop.

The controversy surrounding their debut album, Never Mind the Bollocks, will also be a key feature of the new series.

Pistol is based on the memoir Lonely Boy: Tales from a Sex Pistol by Sex Pistols guitarist Steve Jones.

Danny acts as director and executive producer on the project, which was created and co-written by Craig Pearce. The script was also co-written by Frank Cottrell Boyce.

‘Imagine breaking into the world of The Crown and Downton Abbey with your mates and screaming your songs and your fury at all they represent,’ Trainspotting filmmaker Danny said about the series.

‘This is the moment that British society and culture changed forever. It is the detonation point for British street culture, where ordinary young people had the stage and vented their fury, and their fashion and everyone had to watch and listen, and everyone feared them or followed them. The Sex Pistols.’

He added: ‘At its centre was a young, charming, illiterate kleptomaniac – a hero for the times – Steve Jones, who became in his own words, the 94th greatest guitarist of all time. This is how he got there.’

The Sex Pistols formed in London in 1975. They’re known as one of the most groundbreaking British music acts of all time, pioneering the punk movement.

The band split in 1978. Vicious died the next year from a drug overdose.

Pistol does not have a release date but is expected to air in 2022.