The Prime Minister has been criticised for saying care homes did follow correct procedures to help support those in care homes with coronavirus. Today on BBC Breakfast, presenter Dan Walker demanded clarification from Alok Sharma about Boris Johnson’s comments but became infuriated when he failed to give a definitive answer.

He began: “I wanted to start this morning with the issue of care homes, we are live at a care home this morning. Some of those workers have been staying in the care home for 12 weeks to care for the vulnerable and some of the figures, I’m sure you’re aware of, is 20,000 deaths in care homes have been linked to coronavirus in the past few months.

“With that all in mind, I wanted to play you what the prime minister had to say when he was in Yorkshire.”

A clip was then played of Mr Johnson remarking: “We discovered too many care homes didn’t really follow procedures in the way that they could have but we are learning lessons.”

Back in the studio, Walker asked: “Is he right Alok Sharma? Is the reason so many people died in care homes because they failed to follow procedures?” 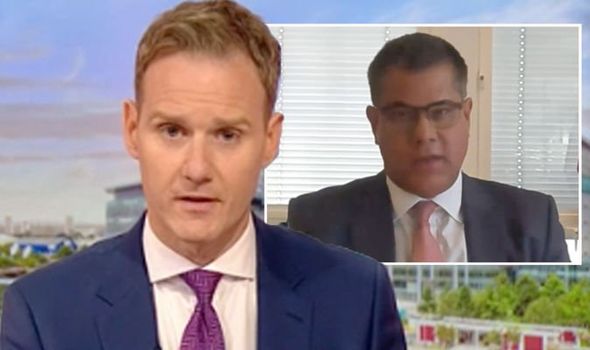 “Well Dan, I think care homes have done a brilliant job throughout this pandemic in terms of dealing with the whole issue,” Mr Sharm replied.

“What I would say is that the Prime Minister was pointing out is that nobody knew what the correct procedures were, but we know that the extent of the symptomatic cases was not known at the time.

“What we did do was step forward with very detailed guidance, we provided extra funding, you know the £600 million that went in as well particularly for people with the infection in care homes. We then had a testing regime, from April everyone in a care home was able to be tested so we have done our best to put our arms around the care homes sector.

“Every death is a tragedy and we’ve been learning throughout this whole process as the Prime Minister said and we will continue to do so and make improvements.” 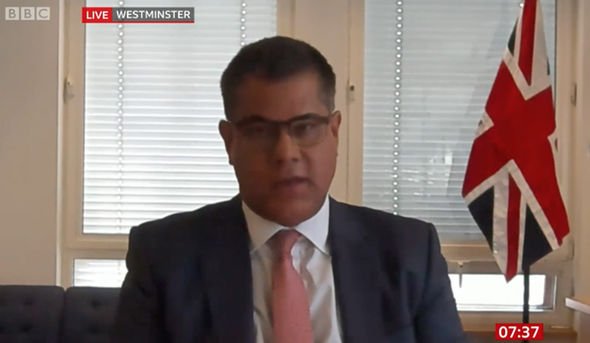 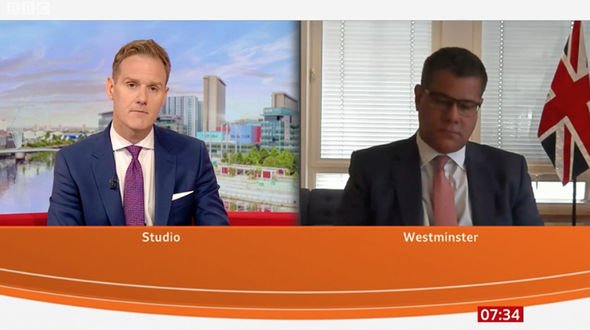 Walker hit back: “Can you understand how there has been such a reaction to what the Prime Minister said?

“And, just to go back to that question I asked, do you think that more lives would have been saved if, as the Prime Minister said, more care homes had followed those procedures?”

“Well I think what the Prime Minister made very clear was that the correct procedures weren’t actually known at the time which is why we set out very detailed guidance about supporting care homes and throughout this process, the past few months, we’ve learnt more and more about this virus in terms of different settings and that’s why we’ve produced support not just in care homes but other settings as well,” Mr Sharma answered.

But his answer didn’t satisfy Walker who cut in: “Okay but forgive me for interrupting, but this is really important because you say you’ve been learning over the past few months about this virus and how you should be dealing with it in care homes.

“And last night, and this morning, they heard the Prime Minister, the most senior politician in this country say if they followed the guidelines, they would have saved more lives. What do you say to them this morning?”

Mr Sharma once more thanked care home workers and repeated his earlier comments insisting the Prime Minister was explaining no one knew what the correct procedures were.

Walker pushed once more: “Forgive me but that is exactly what the Prime Minister said yesterday.”

“Yeah well yes, the Prime Minister on many occasions said that we want to step forward to support the care sector,” Mr Sharma detailed.

“He has on very many occasions thanked people with in the NHS and care sector for everything they’ve done. The point he is making is that no one knew what the procedures were and that’s why the guidelines were put in place.”

Walker sighed: “At the very least, surely you will agree there is a lack of sensitivity and a lack of earnest.

“Should the Prime Minister apologise for what he said? Does it require an apology bearing in mind the anger it has caused?”

Mr Sharma replied: “I’ve explained what the Prime Minister was saying, I think the point is what support are we providing. I accept at the start of this process, things didn’t move as quickly as we would like.”

BBC Breakfast airs daily on BBC One at 6am.