Coronation Street‘s Sarah Platt is shocked tonight (June 4) as she hears the truth about her brother David’s rape ordeal.

David has already confided in his girlfriend Shona, his mum Gail and his gran Audrey about what happened with evil Josh Tucker, as well as reporting him to the police.

In tonight’s Corrie double bill, Gail decides to let Sarah (Tina O’Brien) know why her brother has been behaving so erratically over the past few weeks.

Even though she’s not totally sure that David would want her talking about it, Gail (Helen Worth) lets Sarah know the real reason that he dumped Shona and took his frustrations out on Gary Windass in the boxing ring. 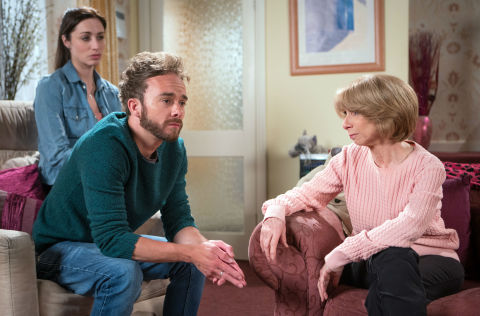 Gail’s decision comes at a particularly worrying time for the Platts as the impact of recent events takes its toll.

Still fearful that the late Richard Hillman has put a curse on her family, Gail is seeking help from clairvoyant Rosemary Piper – unaware that she’s in cahoots with conman Lewis Archer.

Meanwhile, Gary and Sarah have troubles of their own as they wonder how honest they should be about the real reason for Pat Phelan’s return to the cobbles last week.

Digital Spy Soap Scoop video – hit play below for all the latest Coronation Street spoilers, as Alya discovers the truth about Aidan’s will, and Rosie says goodbye to the cobbles.