Struggling to keep track of the constant stream of soap spoilers? Fear not, as every Monday Digital Spy picks out the biggest and best storylines hitting your screens in the week ahead.

1. Coronation Street: Worry grows over David’s behaviour (Monday and Wednesday at 7.30pm and 8.30pm on ITV) 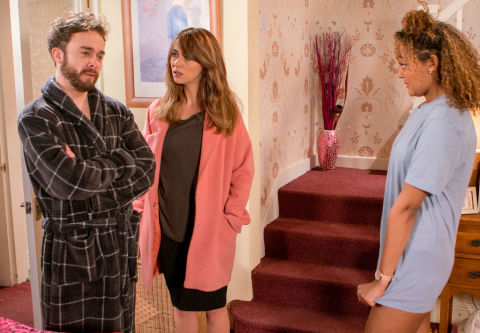 David has recently faced a big backlash on the cobbles after brutally attacking Gary in the boxing ring, but anger is starting to be overshadowed by concern this week as everyone starts to wonder what’s prompted his recent struggles. Gary, Maria and Shona are all particularly concerned that something isn’t right, and it’s Shona who makes the connection that it all seemed to start around the time that David and Josh stopped being friends.

Still determined that nobody should know about his rape ordeal, David tries to prove himself and distract everyone by seducing the salon’s new teenage intern Emma. The Platts are shocked when David even decides to move her into the family home, but will this only fuel further worries about his troubled mental state?

2. Emmerdale: Ross’s quest for justice comes to a head (Tuesday at 7pm on ITV) 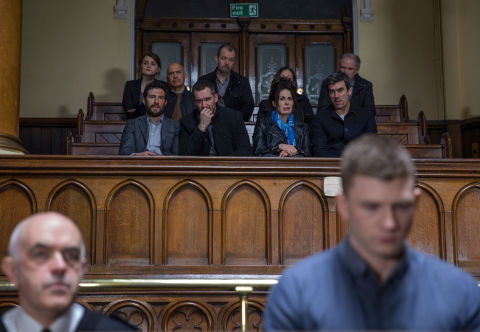 It’s another big week for Ross’s acid attack storyline, as he comes face-to-face with the culprit in court. Drug dealer Simon has been correctly identified as the man who threw acid at Ross, but the big question now is whether there’s enough evidence to prove that.

Things aren’t looking too good when the court hears that a key witness has died, which weakens the case against Simon significantly. The only ray of hope is that the person in question did give a written statement at the time of the attack, but will it be enough to secure a conviction? Or will Simon walk free, cruelly leaving Ross with no closure over the incident?

3. EastEnders: Max Branning returns with some surprises (Monday at 8pm and Tuesday at 7.30pm on BBC One) 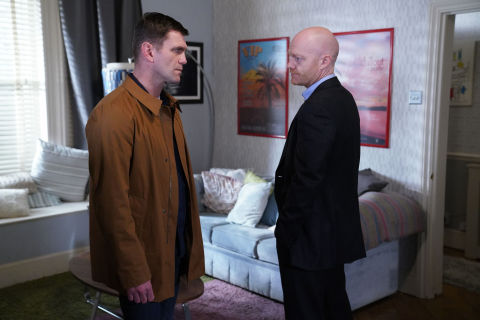 Max may have given up on his twisted revenge schemes (thank God for that!), but he certainly hasn’t lost his ability to surprise the residents of Albert Square with his antics. When Max arrives back in Walford this week, he causes a stir by relaunching the car lot as he tries to get his life back on track – which won’t go down too well with either Ian or Phil.

In Tuesday’s episode, Max has an even bigger bombshell to drop – sharing some shocking news with Stacey. What does he have up his sleeve now? 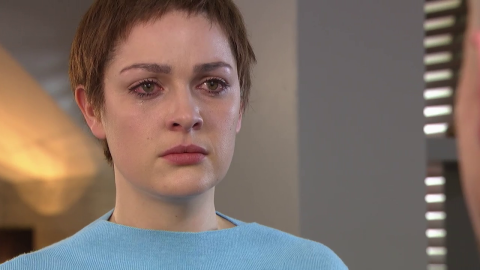 After her shock confession that she lied about having cancer, we’re guessing that Sienna won’t be worming her way back into Joel’s good books anytime soon. But at least that gives her more time to focus on more pressing matters – namely, figuring out who on earth her stalker is.

Tuesday’s E4 episode sees Sienna convinced that she’s finally on the front foot, as the search for her mystery tormentor sees her make contact with an old acquaintance. Later on, nervous Sienna waits at The Hutch, unaware of a younger 20-something guy watching her. What could it all mean? We’ll find out soon enough. 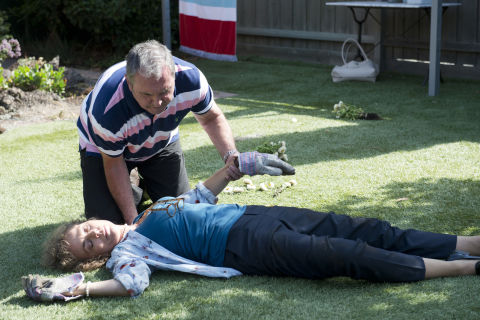 The truth behind Plain Jane Superbrain’s cagey behaviour is finally exposed when she does some digging at Number 32, her old home. After tricking the entire Rebecchi family into leaving the house for a while, Jane searches for buried treasure in the backyard.

Jane’s sneaky behaviour leads to her becoming Ramsay Street’s accident victim of the week, as she inadvertently strikes a cable from the garden lights and receives a severe electric shock. Although Jane does later regain consciousness, she has to explain herself to the Rebecchis by revealing that she’s been searching for a highly valuable book of stamps that once belonged to her gran, Mrs Mangel. How will no-nonsense Dipi feel about Jane violating their privacy and destroying their property?

6. Emmerdale: Charity receives a shocking offer from DI Bails (Thursday at 7pm and 8pm on ITV) 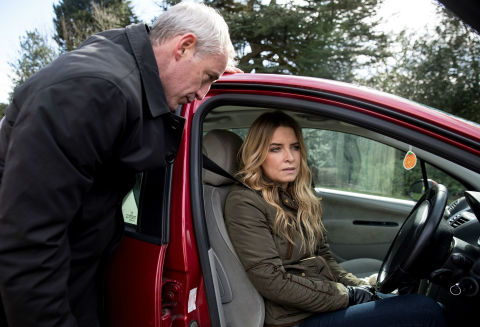 Charity is forced to confront her traumatic past when DI Bails starts working with Tracy on a new police project aimed at tackling sexual exploitation. While Tracy is proud to be involved with the cause and sees Bails as a key ally, Charity and Vanessa both know that she’s potentially in danger by spending time with the evil detective.

Knowing that she needs to stop Vanessa from worrying about her sister, Charity confronts the man who raped her – warning DI Bails to keep his distance from Tracy, or she’ll expose his true colours. But how will Charity react when Bails makes her a shocking offer? 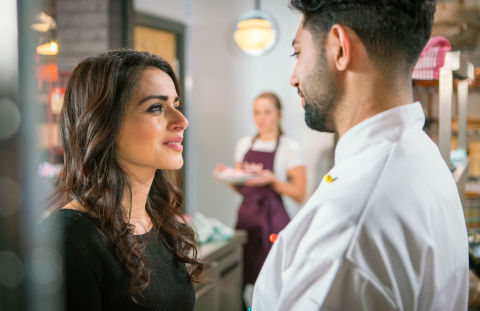 Just when we thought the Kana drama might be over, it looks like there’s another obstacle for the couple to overcome. More trouble flares up when Kate decides to report Rana’s parents to the police over the recent kidnap attempt, ignoring her girlfriend’s wishes to keep the authorities out of it.

Rana is also left with a big apology to make when she initially makes the mistake of wrongly blaming Zeedan for making the tip-off. Zeedan responds by offering Rana a job at his new restaurant, hugging her and giving her a kiss. All of which leaves him totally (and wrongly) convinced that he’s getting closer to a reunion with Rana – oh dear!

8. EastEnders: Tiffany’s future is called into question (Thursday at 7.30pm on BBC One) 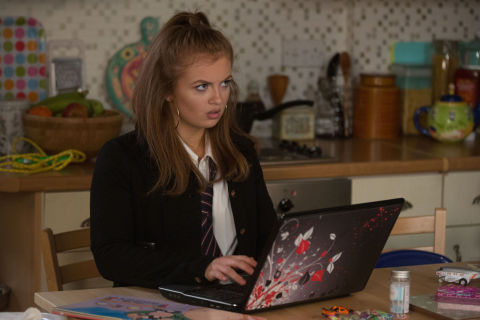 Will she stay or will she go? Tiffany ends up packing her bags when she realises that she may have blown her last chance in Walford. Tiff’s mum Bianca is calling for her to return home to Milton Keynes, and her latest batch of bad behaviour isn’t exactly giving Whitney much of an excuse to keep her around.

Not only does Tiffany pick a fight with the Mitchells by uploading a private picture of Louise and Hunter online, it’s also revealed that she’s to blame for baby Harley being kidnapped by his biological parents after putting a photo of him on social media too. Will Tiffany accept that it’s time to go back home to her mum? 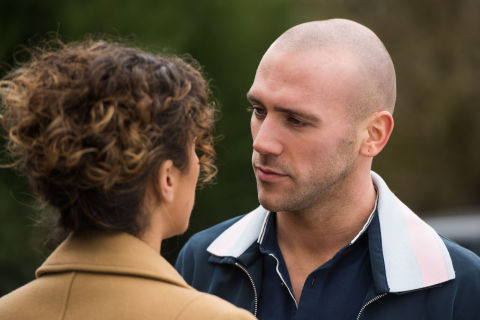 There’s another high-stakes situation in store for Adam when his villainous father Glenn persuades him to carry out another criminal job – and this time it’s a robbery.

Adam is still working undercover with the police and tells DS Roxy Cassidy about the details, but she explains that Glenn will have to be on the job himself if he’s to be caught. Can Adam convince his dad to get involved and lure him into a trap? 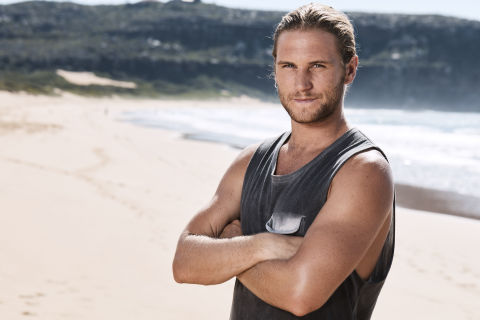 One of Summer Bay’s unluckiest characters runs into more trouble this week, as Ash falls victim to a horror accident while working at the garage. After days of tension with Justin at work, Ash throws himself into his latest job – but there are worrying consequences when the vehicle he’s trying to fix suddenly falls on him.

In severe pain as the car starts to crush his legs, Ash desperately calls for help, but his panic grows as there’s nobody around. With the situation growing ever more critical, how long can Ash survive under the crushing weight?