Watch out for the slime – Nickelodeon is reviving classic gameshow Double Dare.

The series, which originally aired in the 1980s and ’90s, will premiere 40 brand-new episodes this summer.

Nickelodeon released a short trailer for the new show on Wednesday (April 25), featuring clips of the original series.

It teases that the “biggest”, “messiest” and “most anticipated” gameshow will be back soon for a whole new generation.

Double Dare, which first ran between 1986 and 1993 in the US, pits two teams of kids against one another in physical and intellectual challenges, as well as the intense obstacle course.

Although much of the show is expected to remain the same, original host Marc Summers will not be returning.

A new host hasn’t yet been named. 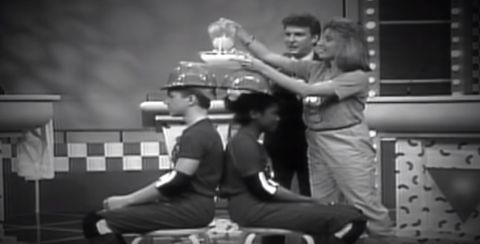 Double Dare isn’t the only classic kids programme that’s made a comeback in recent years – BBC gameshow Raven was revived with a new host last year, with Aisha Toussaint taking over from previous Raven James Mackenzie.

A brand new Moomins series is currently being developed with CGI animation, with the aim to launch 13 new episodes in 2019.

And of course we’re still waiting on that SM:TV remake, which former hosts Ant & Dec and Cat Deeley sound totally up for doing.

Hands up who else can’t wait to completely relive their childhood through TV revivals?