It keeps getting worse and worse for Clare Crawley. I’ve watched a bunch of seasons of The Bachelorette and I don’t remember the contestants ever turning on the lead. But, that’s exactly what’s happening to Clare. In a new hella dramatic promo, the men actually threaten to leave (!!!) as sparks continue to fly between Clare and her rumored fiancé, Dale Moss.

The video shows Clare and Dale getting caught making out in her suite after the men knock on the door since Dale had gone missing. “Let me go hide in the closet,” he says. Uh-oh. Then, Chris Harrison announces that Clare is missing dinner and that’s when the drama really starts. Kenny yells, “I expected way more from the oldest Bachelorette,” and Clare says “sick! sick!” 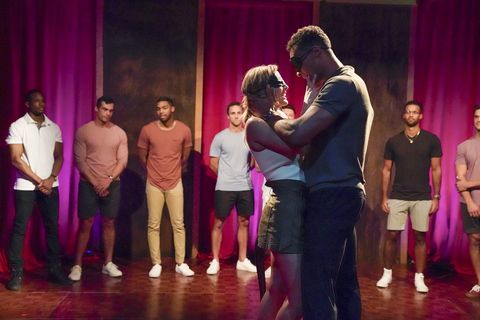 Pause. So far we have Clare ditching the group to make out with Dale, which is frowned upon, especially this early in the show. The guys seemingly catch them in the act and then slam her for it. Okay, got it. “If you want to go be with Dale, then we’ll all go home,” another guy says. We all know how this is going to end. Clare and Dale will run off together and producers will swoop Tayshia Adams in to be the new Bachelorette. And judging by this teaser, it looks like Clare might leave in the next episode.

“There’s a Clare frontrunner here and the men have to Dale with it,” the promo teases. “Setting the stage for the biggest twist in Bachelorette history.”