A law protecting the word 'Anzac' from inappropriate commercial use was breached by Channel Nine on Tuesday when Today used it as the code word in a cash giveaway.

Audiences may enter the daily $10,000 "Mega-Cash-A-Roo" giveaway by texting a code word advertised by Today during the previous day's show. On Tuesday, for the Wednesday cash giveaway, that code word was 'Anzac'. 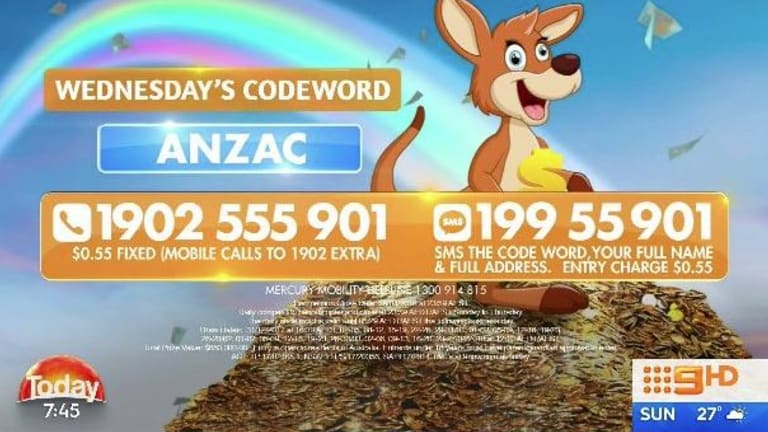 Channel Nine’s Today show is facing a possible fine for breaching regulations on commercial use of the word ‘Anzac’.

Under the Protection of Word Anzac Regulations, the word Anzac – or any word resembling it – in connection with "any trade, business, calling or profession or in connection with any entertainment or any lottery or art union or as the name or part of a name of any private residence, boat, vehicle of charitable or other institution, or other institution, or any building" is not permitted without the authority of the Minister for Veterans' Affairs.

Commonly approved commercial uses of the word 'Anzac' include the sale of biscuits, providing they conform to the traditional recipe and shape, and are called 'biscuits' or 'slice' rather than the Americanised 'cookie'.

In considering applications for use of the word 'Anzac' in commercial contexts, the minister takes into account matters including the intent of the legislation to protect the word from overuse and misuse, the views of the ex-service community, and whether there is any commemorative link between the proposed use and the Anzacs and the Gallipoli campaign.

A spokeswoman for the Department of Veterans Affairs said the use of the word for a cash giveaway by Channel Nine was not approved by Minister Darren Chester.

"Even if they had approached us, we wouldn't normally grant them the use of the word Anzac in this manner," she said.

The department has reached out to Channel Nine for an explanation.

Although "no decision has been made", there are significant penalties for breaching the law, the spokeswoman said.

In a statement to Fairfax Media, a spokesman for Channel Nine acknowledged its use of a word in a giveaway was a poor choice.

"The Today show is proud of its extensive support and celebration of Anzac Day and its important place in our national identity," he said.

“We accept in hindsight it was an inappropriate use of the word. It was never intended to cause offence to anyone."