EXCLUSIVE: Stars of Broadway will stage a fundraising concert for Joe Biden’s presidential campaign, with plans to stream the event on Oct. 21.

The event, which starts at 8 PM ET, is organized by the group Broadway for Biden and is called In Our America: A Concert for the Soul of the Nation, with donations going to the Biden Victory Fund.

Liesl Tommy, director of the upcoming Aretha Franklin biopic Respect (with Hudson in the lead role), will direct the show. Tommy is the executive producer along with Julie Boardman, Nolan Doran, Halle Morse, and Jennifer Mudge.

The concert will stream on YouTube via news publisher NowThis, on Facebook via Broadway for Biden and NowThis, and on Broadway Unlocked.

In a statement, Tommy said, “It is a tremendous honor to direct this incredible collective of performers and artists, who are coming together to amplify the promise of Broadway and a nation that are future-looking, accessible, and deeply inclusive.”

The evening will include original material, stagings of musical numbers that have never been seen, and previews of productions bound for Broadway. Among those contributing are Chad Beguelin, Tony Kushner, Lynn Nottage, Robert O’Hara, Stacey Rose, Aurin Squire, DeLanna Studi, Paula Vogel and John Waters.

The event is in the vein of a fundraiser in 2012 for Barack Obama’s reelection campaign, called Barack on Broadway, that was produced by Margo Lion and others. 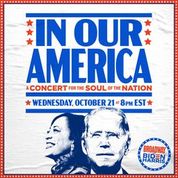