In a previous report, it was said that the production on the sophomore season of the period drama series was shut down again due to positive tests for COVID-19.

AceShowbiz –Nicola Coughlan has set the records straight about “Bridgerton“. The actress took to her Twitter account on Monday, September 6 to deny reports that filming for season 2 was recently shut down due to COVID-19.

Nicola, who plays Penelope Featherington on the hit Netflix series, responded to a fan who was sad over the news. “NOOOOO, for God sake. @nicolacoughlan tell me this isn’t true,” the fan wrote alongside a screenshot of a report about the filming for the upcoming season was halted for the third time after “cast members and crew” got COVID-19. “It’s not true!” Nicola confirmed. 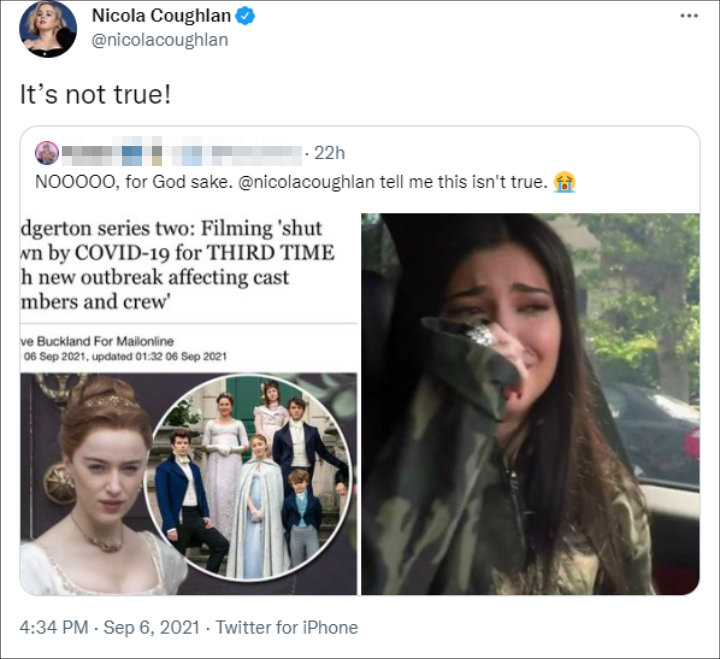 Nicola Coughlan denied that filming of ‘Bridgerton’ season 2 was shut down.

Fans were surprised to find out that the news wasn’t true. “Why do certain media outlets make this sort of stuff up? Drives us all crazy,” a fan replied. Another fan added, “Thanks for confirming Nicola. (The article was from the daily fail online so we should have known it was a load of crap lol).”

In a previous report, it was said that the production on the sophomore season of the period drama series was shut down again due to positive tests for COVID-19. Producers of the Netflix series were allegedly fuming as they were behind the schedule. “Filming has been in chaos due to Covid and bosses are hopping mad,” a source claimed.

They were additionally said to be embarrassed as other dramas like “The Crown” is able to film without a hitch. The source added, “It’s embarrassing they don’t seem to be able to do the same.” The insider further claimed, “This outbreak has taken down members of cast and crew, who were told filming would be halted until further notice.”

Prior to this, the filming for “Bridgerton” season 2 was delayed in July after two members of the production team tested positive for COVID-19. Later in the same month, the production was shut down once again following another positive COVID test on set, but the crew were back to work in early August. “We are back under way. We had to delay because of COVID, but we’re back in it,” said showrunner Chris Van Dusen to Variety at the time.

Star Phoebe Dynevor, meanwhile, previously showed concerns about going back to filming for season 2 amid the coronavirus pandemic. “I can’t imagine how it would be possible to film under these circumstances,” she shared back in January. “There are so many extras and so many crew members, and it’s a very intimate show. It just baffles me how we would film it under COVID rules unless there was a vaccine beforehand.”