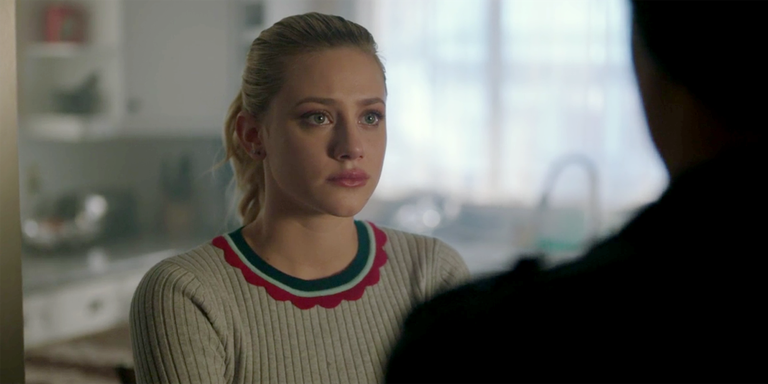 This week’s Riverdale brought viewers — and Betty — one step closer to finding out the Black Hood’s real identity. Alice had another incredible episode (give this woman all the awards), Cheryl delivered another song (this time, at Midge’s funeral), and Archie briefly got kidnapped by Nick St. Clair and his Black Hood imposters before Veronica saved the day and earned $1 million without any help from her parents, aka. “Boris and Natasha” from The Rocky and Bullwinkle Show. In the middle of this commotion, Betty’s creepy “Lollipop” ringtone also returned, along with phone calls from the Black Hood. While the episode’s final scene between Betty and Alice suggests that Hal is currently the number one Black Hood suspect, those listening closely to Betty’s “Lollipop” phone calls might have arrived at that conclusion earlier.

Approximately halfway into “Prisoners,” not long after Chic’s cover is blown (he’s not Betty’s real brother, Charles, surprise, surprise), the Black Hood calls. “For all I’ve taught you, you’ve been making amateur mistakes. Letting an enemy – a sinner – into your house,” he tells Betty. He goes on to call Chic “a man who lived in a den of sinners, who kills as easily as he did in your house. That man has murdered before.” Before Jughead walks in on Betty’s call, the Black Hood hangs up. “Is that your mom?” sweet, innocent Jughead asks. Betty lies: “Uh. No. It’s my dad.” If we are to read anything into Hal’s timely absence during Betty’s delivery of Chic to the Black Hood in the graveyard, Betty’s lie — or slip up — was intentional. She could’ve said anything in that moment: “It’s Cheryl.” “It’s V.” “It’s Polly asking about our real but probably dead brother.” But she chose to mumble, “my dad,” which makes the connection between Hal and the Black Hood even stronger. It also begs the question: Does Betty also believe her dad is the Black Hood? And more importantly, has she suspected this all season long?

Then again, this is Riverdale. If the show is trying to distract viewers by leading everyone to believe Hal is Black Hood, it wouldn’t be the first time. Svenson the janitor (may he rest in peace) was so obviously a fake out, why would pinning Hal as the masked vigilante be any different? This is the same show that randomly made Cheryl’s mom an escort, brought back the actor who played Clifford Blossom to play his evil twin brother, and tried to make a big deal out of Archie’s Red Circle, which later became the Dark Circle (LOL). Not everything’s made sense, but with three episodes left this season, the show must go on, right? Could the mystery of the Black Hood be this simple? Or will Riverdale extend this storyline over to season three?

One theory suggests that Hal is being used as a red herring while Betty’s brother is still alive and out there causing havoc as the real Black Hood. You know the drill by now: unless a body is presented, no one is really dead on Riverdale. Even if Chic was telling the truth about having a fight with Charles, there’s no flashback or proof that he really died. Maybe he walked out of their motel that day injured and eventually recovered and developed an affinity for cotton ski masks. Betty handing Chic over to the Black Hood in the cemetery could be the exact next move in his books. If the Black Hood is Betty’s real brother, a brother you’ve never seen on the show, this is his latest moment of revenge.

As always, don’t spend too much time trying to figure this out. The next episode is just around the corner, and it looks like a body bag will play a big role!