So last night (May 2) saw Benidorm wrap up series 10 and, as we were led to believe, the entire show. Fans were upset that the sitcom had come to an end, while others were divided on whether it was a good send-off.

But ITV has now said that it isn’t necessarily curtains for the Solana crew. A spokesperson insisted that “no decision has been made regarding any further series of Benidorm“.

The person who originally said that the show was coming to an end was none other than creator Derren Litten, who tweeted earlier this week: “Crazy to think Wednesday will be the last episode of Benidorm… It’s difficult to think what else there is to do!”

That seemed pretty definitive, but then Litten has also thrown a spanner in the works with his other tweets. Star Jake Canuso explicitly referred to a “next series” in a tweet too. What’s going on? Are we just being trolled?

Litten cleared things up in a chat with BBC West Midlands host Alex Lester (from about 2 hours 20 minutes in) – the only press interview he’s done this week.

The writer explained that he makes a similar kind of tweet every year, and he’s never corrected anyone who’s said it was the last ever episode. 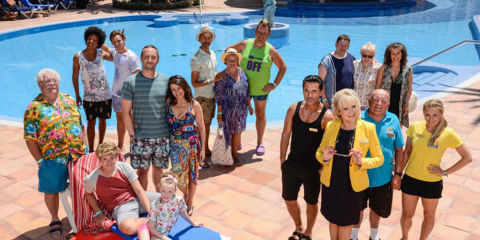 So will the show continue? “The honest truth is I don’t know,” he replied. He added that ITV has known for ages he is working on a stage show, so there isn’t a rush to make a decision.

Normally the show is filmed in March, but with the cast involved in the live version, Litten noted that they couldn’t have done that this year.