Fun party games on Below Deck make way for bosun Eddie Lucas to give the crew his best goat impression, which has everyone on the floor. 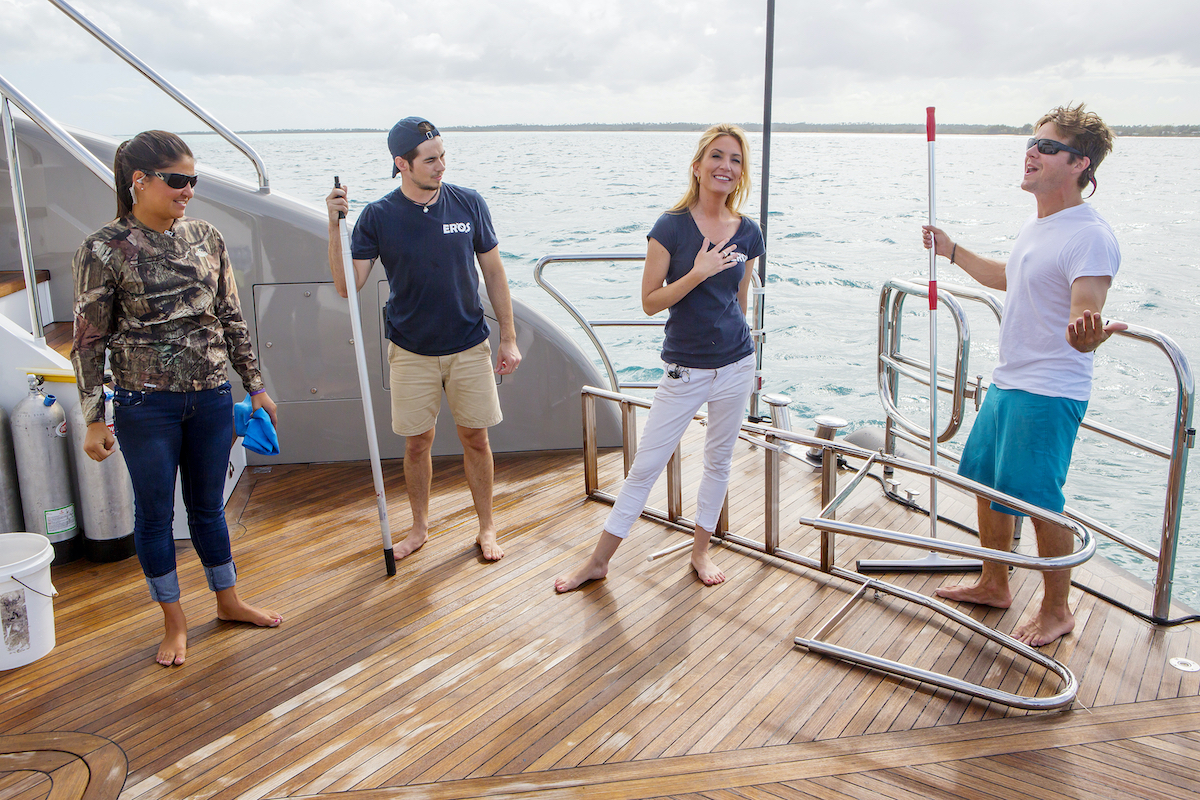 The crew plays “truth or dare” during a night while drinking on the boat. James Hough and Elizabeth Frankini are out on a date so the crew decides to bond over cocktails and conversation. Chief stew Francesca Rubi pours drinks and the crew gets ready to settle in for a night of debauchery.

“I feel like a drinking game or something,” Lucas says in a preview clip. The crew takes their cocktails up on deck where they gather and decide to play truth or dare.

Who knew Eddie Lucas had his hidden talent?

Lucas is put on the spot immediately. “Truth or dare,” Rubi points at him. He cringes and then says “dare” in a high pitched voice, formed as a question. That’s when chef Rachel Hargrove presents her dare.

“I dare you to go down and goat call!” she demands. The crew giggles because they know this could possibly be good … or bizarre. Or both. Everyone seems to have had an ample amount of booze as laughter builds and Lucas agrees.

Not only does Lucas offer a goat call, he assumes the “goat” position on all fours. The sound of a goat comes bursting from his vocal cords as he then arches his back and screams into the night. This puts the crew over the edge laughing and filming the moment on their camera phone.

Lucas obliges again as he apparently has quite a knack for this hidden talent. “Okay that’s it,” he laughs as he rises back to his feet. As he gets up the crew falls to the floor because they can’t stop laughing. Meanwhile, producers flash on the screen that it is only 8:15 pm, 64 hours before the next charter.

The crew has extra time for hyjinks

The crew usually doesn’t have 64 hours between charters, which indicates that Captain Lee Rosbach stuck to his guns about ending the previous group’s charter. A charter guest becomes so drunk during dinner, she decides to go swimming at night against Rosbach’s orders.

She then mocks Rosbach from the water, further angering him.  “Delores diving into the water is the ultimate f**k you to the captain,” Rosbach said in a confessional during the previous episode. “She’s drunk, it’s dark, I don’t need somebody jeopardizing their own life on my watch.” Cameras capture the guest swimming away in the dark ocean. “That is not f**king going to happen,” he added.

The guest decided to debate Rosbach from the water when he demanded that she return to the boat. Clearly having enough, Rosbach returned to the other guests who are waiting at the table.

“I hate to tell you this, but your charter is over,” he told the guests. “She’s in the water. She’s drunk. And she won’t come out. We’re going to head back to the dock because I’m not putting up with this.”

Below Deck is on Monday at 9/8c on Bravo.