Avengers 4 is going to be a turning point in the Marvel Cinematic Universe. The untitled Avengers movie will complete the story that begins in 2018’s Avengers: Infinity War – the showdown with the giant, purple space villain Thanos.

Characters will die (probably), heroes will retire, and the stage is being set for a greatly changed MCU. We’ve finally had the chance to see Infinity War – check out our spoiler free review – and although naturally the most is packed with plot points that will feed into Avengers 4 we’re not at liberty to reveal those points just yet. Instead, go check out Infinity War, then come and visit us here again after it’s been out for a bit when we’ll explain what all those things mean…

Infinity War aside, Here’s what we know so far.

That puts its release date almost exactly a year after Infinity War. Between those two films we will be getting Ant-Man and the Wasp (in 2018) and Captain Marvel (earlier in 2019). 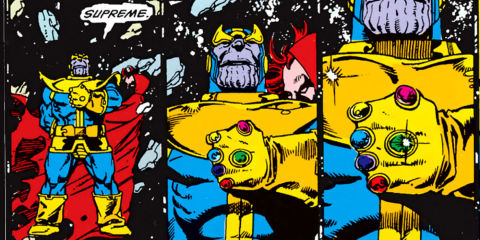 Clearly we don’t know the title yet. It was originally given as ‘Avengers: Infinity War – Part 2’.

Around the release of Guardians of the Galaxy Vol 2, Gamora actress Zoe Saldana seemed to accidentally reveal that the film is called ‘Gauntlet’ – presumably ‘Avengers: Infinity Gauntlet’, after the comic that the third and fourth Avengers movies are loosely based on. Guardians director James Gunn insisted that she just misspoke.

Marvel Studios president Kevin Feige hinted that the title of the movie could be a spoiler. ‘Avengers: Iron Man is Going to Die Horribly’, perhaps? The Russo brothers say that we should be very afraid, so perhaps that’s it.

Avengers: Infinity War is shaping up to have the biggest superhero movie cast ever, and unless Marvel surprises us by killing off a significant portion of their heroes, we expect most of those actors will be back for part 2.

Evangeline Lilly – who isn’t in Infinity War – will appear as The Wasp, although only in a small role.

Don’t forget Chris Evans and Jeremy Renner, although they might be Nomad and Ronin rather than Captain America and Hawkeye.

So, basically everyone then.

Brie Larson won’t be making her Avengers debut as Carol Danvers – the MCU’s most powerful superhero – in Infinity War, but after her actual first appearance in the ’90s-set Captain Marvel, the speculation is that she’ll join up with the other heroes in Avengers 4. Feige has hinted at that by promising that her story is “going to be a big part of heading towards this epic conclusion and epic finale of 22 movies over the course of 10 years”. That sounds pretty unequivocal to us.

Ty Simpkins, who played the kid Harley Keener from Iron Man 3, is reported to be returning too.

Oh, and Stan Lee will have a cameo if it’s practically possible. Can’t forget Stan Lee.

Directors Anthony and Joe Russo are returning after Infinity War. Well, ‘returning’ isn’t quite the right word, as they filmed the two movies back-to-back. And Brolin hinted that it might be their final project for Marvel.

Infinity War will deal with the Avengers and the Guardians of the Galaxy teaming up against Thanos, who (with his lieutenants/children the Black Order) will be collecting those superpowered MacGuffins the Infinity Stones for his Infinity Gauntlet.

Avengers 4 follows on from that… sort of. We’ve been told that it’s a different genre from Infinity War, and the stories are separate enough that the original ‘Avengers: Infinity War – Part 2’ title had to be abandoned.

Not knowing the specific details of Infinity War, it’s hard to know exactly what will happen in its sequel. We expect more tussling with Thanos, but that’s getting increasingly hard to be sure about.

Another bit of speculation is that the film could have something to do with the comic book event Secret Invasion – in which Earth was revealed to have been thoroughly infiltrated by shapeshifting Skrull aliens. To be honest, we’re not sure that Marvel is likely to slip that story in at this relatively late stage, even if the aliens are introduced in Captain Marvel.

There is also some evidence (including various actors donning their old costumes) pointing towards a time-travel plot for the movie. The Time Stone (first seen in Doctor Strange) could easily account for such goings on.

And Tony Stark is going blonde. That has to be a huge plot point, right?

What we do know for certain is that the untitled Avengers movie will mark an ending to what will be an 11-year-old, 22-movie-long story at that point (kicked off in the distant past by 2008’s Iron Man).

Chris Evans has said that Avengers 4 is “going to wrap everything up”. It marks the end of Marvel’s Phase Three, and leads directly into the first Phase Four film, the sequel to Spider-Man: Homecoming. And we mean directly – Spider-Man 2 is set mere minutes after the end of Avengers 4.

What form will this end take? It’s a safe bet that some long-time MCU stars will take Avengers 4 as a good opportunity to bow out. Evans had hinted that this is his last outing as Cap. Will Downey finally retire from the franchise too, as has been teased repeatedly over the last few years? Or maybe Hemsworth is on his way out. Feige has been teasing possible deaths to round off Phase Four.

And how will these exits happen? It’s a toss up between walking off into the sunset for a well-earned retirement, being murdered brutally to spur on their allies, or the tried and tested Noble Sacrifice™.

Phase Four, we’re promised, will mark a big change for the MCU. Whatever form those changes take, Avengers 4 is where it all starts.