To All the Boys I’ve Loved Before, aka the movie that stole the internet’s collective heart, is getting a sequel! THIS IS NOT A DRILL.

The Netflix flick is absolutely irresistible—from the dream pairing of super-relatable Lara Jean Song Covey and Peter “the teenage dream” Kavinsky to all the ’80s and ’90s rom-com references. So it’s no surprise Netflix was convinced to push through with a sequel. Here’s everything we know about the second and third films.

1.It’ll be here in time for Valentine’s Day!

At long last, the second installment to the TATBILB series is just a few measly months away. Netflix gave us literally the best Christmas gift ever when it announced the sequel via this adorable video with Lana and Noah back last December.

But Netflix just gave us even more Instagram cuteness with a video that confirmed the release date: February 12, 2020—almost a year and a half after the original dropped. Still, it’ll make for a very romantic date movie, so shout out for Netflix for guaranteeing that I have at least some kind of plan on V Day.

However, the release date wasn’t all they announced…

In case getting excited by ONE sequel wasn’t enough, Netflix also announced that the third film in the series, titled To All the Boys: Always and Forever, Lara Jean, is already in production. 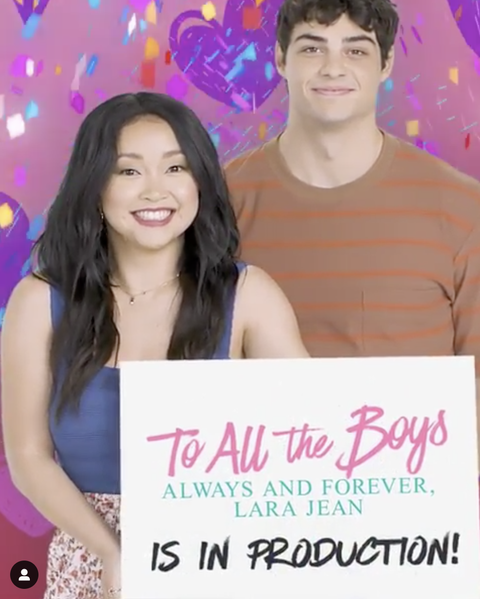 (Side note: this green-screen was…a choice)

The three-quel is currently shooting in Vancouver and is apparently scheduled to wrap up on August 20.

3. There are two more books!

Jenny Han’s TATBILB book series is actually a trilogy. To All the Boys I’ve Loved Before is followed by P.S. I Still Love You and Always and Forever, Lara Jean. So if you’re looking for major spoilers or can’t wait long enough for the sequel to be released, you can find out what happens to Lara Jean and Peter the old-fashioned way: read.

4. All your favorite characters will be returning (with one major exception).

We can’t have a TATBILB sequel without Peter and Lara Jean, of course, but they aren’t the only ones coming back. Netflix recently announced that the whole Covey family will be returning. Janel Parrish, Anna Cathcart, and John Corbett will all be reprising their roles as Lara’s lovable sisters and precious dad.

The whole Covey family is coming back! @JanelParrish @annacathcart & John Corbett will reprise their roles in our “To All The Boys I’ve Loved Before” sequel pic.twitter.com/1NQ2Re6ssh

So we’ll get to see Lara and the rest of the Covey crew again, but there’s one major change happening in the sequel: It’s getting a new director! Susan Johnson, the director of the first film, will remain as an executive producer, but due to scheduling conflicts, Michael Fimognari will be taking her place for the second movie. Not only was he the director of photography on the first To All the Boys, but he also shot another Netflix gem, The Haunting of Hill House.

If you made sure to patiently watch through the first half of the end credits, you probably already guessed that a sequel would be in the works because another one of Lara Jean’s letter recipients comes to the Coveys’ door: John Ambrose McClaren from model UN.

To the time I got to join the trio for a day ? doesn’t this seem like a long time ago!? Was so good to see you three again! I am encouraged on the good things you all are doing 🙂 Thanks for making me laugh! Also thanks for the snap @dougiecash ??

To the time I got to join the trio for a day 😉 doesn’t this seem like a long time ago!? Was so good to see you three again! I am encouraged on the good things you all are doing 🙂 Thanks for making me laugh! Also thanks for the snap @dougiecash 🎥🎥

Author Jenny Han expressed her interest in making a second movie particularly because of John Ambrose, who enters Lara Jean’s life once again and rekindles their friendship by exchanging letters with her in P.S. I Still Love You. “There’s so many things in the second book that I would love to see in a sequel,” she told Indiewire. “The whole reason why I wrote a second book was for the character of John Ambrose McClaren, who is a fan favorite, and he’s a favorite of mine too.”

John Ambrose was played by actor Jordan Burtchett in the first film, but in the sequel, he’ll be played by the ridiculously adorable Jordan Fisher.

You might recognize Jordan from Rent Live!, Grease: Live, or Dancing With the Stars. He’s a singing, dancing, and acting triple threat. In case I failed to mention it earlier, he’s ADORABLE!

6. Ross Butler will be joining the cast as well.

Apparently, the TATBILB producers want to spoil us as much as possible with this sequel. Not only will Jordan be joining the cast, but Ross Butler will also make an appearance! Yes, the OG Reggie from Riverdale and the lovable Zach Dempsey in 13 Reasons Why will play Peter Kavinsky’s BFF, Trevor Pike.

@rossbutler has officially been cast as Trevor Pike in the #ToAllTheBoysIveLovedBefore sequel! ?? Trevor is Peter Kavinsky's best friend and one of his biggest allies in the sequel. Click the link in our bio for more details. ?: BETTINA STRAUSS/NETFLIX

A post shared by Entertainment Weekly (@entertainmentweekly) on Apr 1, 2019 at 11:34am PDT

@rossbutler has officially been cast as Trevor Pike in the #ToAllTheBoysIveLovedBefore sequel! 😱👏 Trevor is Peter Kavinsky’s best friend and one of his biggest allies in the sequel. Click the link in our bio for more details. 📷: BETTINA STRAUSS/NETFLIX

A post shared by Entertainment Weekly (@entertainmentweekly) on Apr 1, 2019 at 11:34am PDT

Producer Matt Kaplan told EW, “[Ross’s] real-life friendship with Noah brings a natural chemistry and great rapport to the set, and we can’t wait for fans to see this friendship play out onscreen.” Thanks to Lana’s filming skills, we’ve already caught a glimpse of their on-set antics.

7. It’s not going to be all milk shakes and jean-pocket spins.

Because John Ambrose is in the picture, you already know there’s going to be trouble in paradise. And for loyal LJ+Pete shippers, it’s going to be painful to watch. “We’re so invested in Peter and Lara Jean that seeing them go through struggles is going to be hard but also something everybody can relate to,” director Susan Johnson told ET back in August. “The next shiny face comes in and you’re like, ‘Oh shoot, this guy’s really nice too. What do I do?’”