As the World Turns, fans mourn the loss of beloved soap opera icon Kathryn Hays. The actor is best remembered for her role as Kim Hughes on the CBS soap opera. Hays died on March 25, 2022, at the age of 88. Read on to learn more about her life and career.

Hays was born in Princeton, Illinois, on July 26, 1933. The actor’s career in showbiz began in the 1960s with roles on TV shows like The Road West, Star Trek, and Bonanza. But in 1972, she landed the role that would make her famous.

On August 31, Hays made her As the World Turns debut as Kim. The character started as a vixen who had an affair with her sister’s husband, Bob Hughes (Don Hastings). However, Kim became a heroine and one of Oakdale’s most beloved residents throughout the decades.

Kim had many relationships, including her marriage to John Dixon (Larry Bryggman), with whom she has a son Andy Dixon (Scott DeFreitas). But it’s her marriage to Bob that would become the show’s iconic love story.

Kim and Bob had two children, Sabrina and Chris Hughes (Julianne Moore and Daniel Cosgrove), and she was stepmother to Bob’s children, Frannie and Tom Hughes (Moore and Scott Holmes). The couple faced many issues during their marriage, including infidelity, Kim’s heart surgery, and Bob’s stroke. However, their love for each other never died.

Hays continued to portray Kim until the show’s cancellation in September 2010. The final episode had Bob deciding to retire from his career as a doctor. Bob and Kim walked out of his office to celebrate his retirement in the last scene.

Later, years after the show’s cancellation

After the cancellation of As the World Turns, Hays retired from acting. She lived in Fairfield, Connecticut, with her daughter Sherri and son-in-law Bob. In addition to her daughter and son-in-law, Hays is also survived by three grandchildren and one great-grandson. The actor was married three times, and her ex-husbands include Sidney Steinberg, actor Glenn Ford, and Wolf Lieshke.

Hays remained close to her former co-stars, including Hastings. Hastings posted a heartfelt tribute to his former onscreen wife after her death. “Our relationship as Bob & Kim was as close as Kathryn & my relationship except we were not married. We were more like brothers and sisters, and we were great friends. Our biggest squabble was that she always wanted to rehearse, and I wanted to take a nap. This is a huge loss to all who knew her.”

As news broke of Hays’ death, As the World Turns, fans flooded social media with memories of the actor. On a Twitter thread, fans expressed their condolences over the actor’s passing. 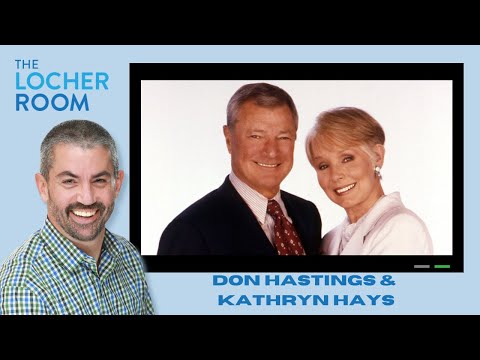 “Grew up watching her with my Mom. Lovely and talented actress. RIP, Kathryn Hayes,” wrote one user.

“Oh no. She was such a beautiful woman. May she rest in peace,” another commenter replied.

“Awe, rest in peace, Kathryn. You were a class act. Loved Kim & Bob!” one fan wrote.

The soap opera community has lost another legend with Hays. In recent months, fans have mourned the deaths of several famous daytime stars. In November 2021, Hays’ co-star Lisa Brown died at 67. While Hays is gone, loyal soap fans will remember her fondly for her work.