Ariela Weinberg has decided to clear the air and practice some honesty with her followers on social media.

The 90 Day Fiance: The Other Way star has had her hands full since the day she touched down in Ethiopia to start her life with her partner, Biniyam Shibre. And, it’s no secret that they’ve had a rough time navigating life together as a family of three.

Now, Ariela has shared that Biniyam is the entire reason that she signed on for the show in the first place.

During a Q&A on her Instagram, Ariela answered several questions from followers, which included why she decided to apply to appear on the show and even questions regarding her weight loss since having baby Aviel earlier this year.

Ariela explained that after seeing an ad on Craigslist that requested “people who had fallen in love with foreigners,” she applied in the hopes that it would help Biniyam get a visa.

Another question asked Ariela how she decided to film with the show.

She responded, “Even though I was very camara [sic] shy, I agreed to do the show for Bini[yam]. I wanted him to get exposure for his talents! Essentially I found a way to get paid to travel!”

Fans were first introduced to the couple on the latest season of the show where Ariela explained that Biniyam is “a dancer, choreographer, martial artist, gymnast, and every other “ist” that exists.”

It’s clear that Ariela’s adjustment to life in Ethiopia hasn’t been an easy one, although she is trying to make it work for the sake of her family.

One of the most recent issues brought to light was the couple’s difference in religion. Ariela was raised Jewish and Biniyam is Christian. And although Ariela wasn’t keen to have baby Aviel baptized, she agreed in order to appease Biniyam and his family.

Despite her efforts to assimilate, fans have been vocal in calling her out and accusing her of being “rude” to Biniyam and disrespecting his culture.

One follower commented, “I like ya girl…but you are so [rude] to bini…you are in HIS CULTURE…if he wants 2 show respect and kill a chicken you YELLING at him in front of your parents is the epitome off disrespectful…you come off very spoiled miss thang…” 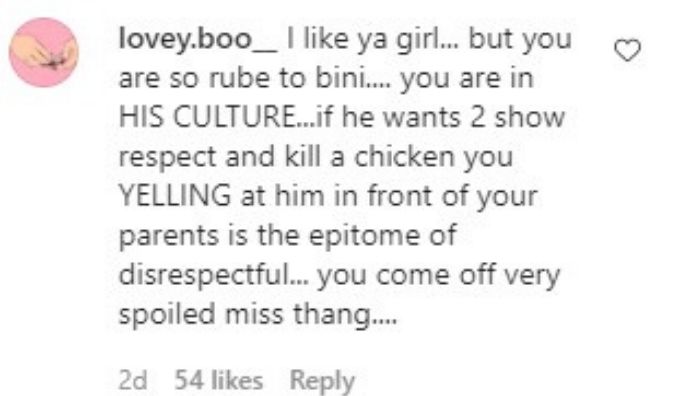 “You are so rude!! You and your family came to Ethiopia and was just rude asf! All you do is try and control that man and never want to understand what he wants for his son! I hope you come down off your high horse and stop being a fn brat!” said another.

Other followers gently attempted to nudge Ariela in telling her that she was a little overbearing.

“Ari[ela]-please please don’t be so mean. I think you are a good person but you are coming across so mean [on] the show —very very mean,” said one comment. 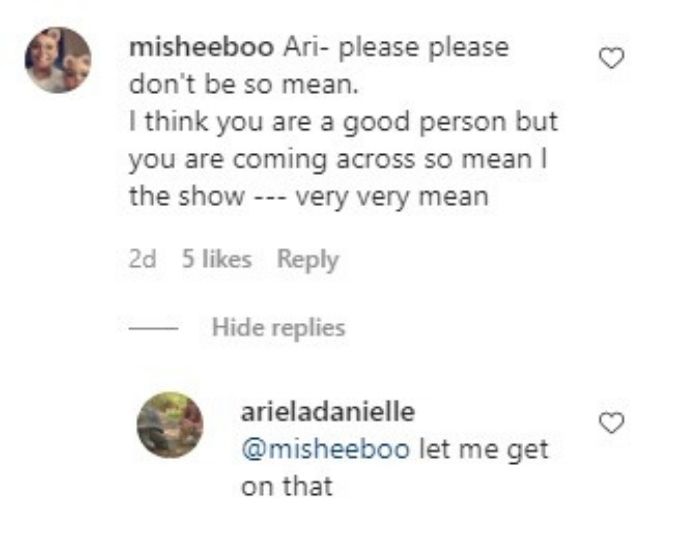 Ariela, however, doesn’t seem very bothered by the hate. She responded to the comment by saying, “Let me get on that.”