ANT-MAN AND THE WASP

In the Marvel Universe pantheon of unlikely superheroes, Paul Rudd's Ant-Man is right up there – or rather, down there – as his special talent lies in his ability to shrink to the size of an insect. 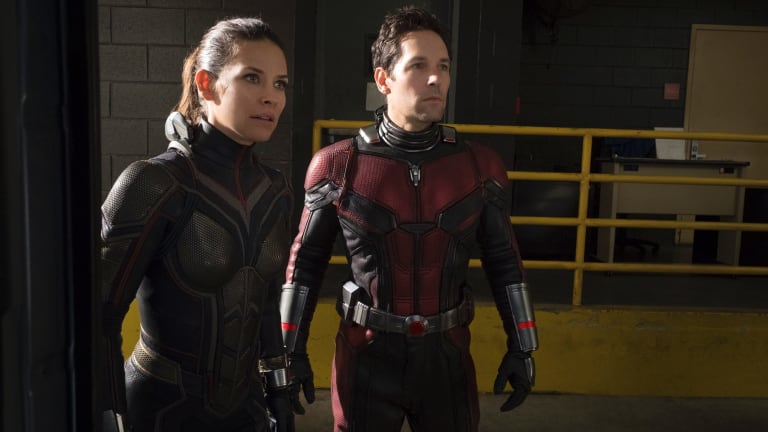 Evangeline Lilly, left, and Paul Rudd in Ant-Man and the Wasp.

At times, he grows instead and rather likes it. Sixty-five feet, he announces proudly in Ant-Man and the Wasp when asked the maximum height he had been able to achieve when wearing his super suit. Rudd's default expression, however, is haplessness. His face spells out the question: "Who? Me?", as if astonished that anyone could choose its possessor for anything more arduous than washing the dishes.

In line with the times, he's been assigned a more assertive female partner in this, the second film to give Ant-Man a leading role with his name in the title. Played by Evangeline Lilly, she's Hope Van Dyne, the daughter of Michael Douglas's Hank Pym, the original Ant-Man and inventor of the technology that is enabling Rudd's Scott Lang to downsize so drastically.

Once estranged from her father, Hope is now working with him and this time round, she graduates to super status, taking on the suit, the powers and the identity of the Wasp. And she's on a mission, hoping to discover the fate of the first Wasp, who happened to be her mother.

Ant-Man fans hooked on the geography and chronology of the Marvel Universe will already know that the action takes place two years after the events which unfolded in Marvel's Captain America: Civil War. But the script makes allowances for the rest of us by filling in the back story with large dollops of exposition which also incorporate a tutorial on the heavily Marvelised version of quantum physics which powers the plot. 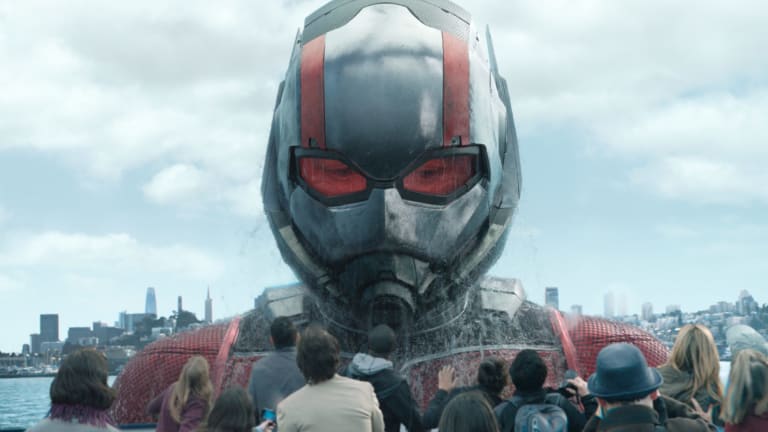 Paul Rudd in Ant-Man and the Wasp.

To sum up: 30 years earlier, Hope's mother, Janet Van Dyne (Michelle Pfeiffer), vanished while she and Hank were trying to save the US from nuclear destruction. Shrinking to the size of a sub-atomic particle to disarm a ballistic missile, she was forced to consign herself to the "quantum realm" with no prospect of return. Or so it was thought. But Ant-Man's recent exploits have raised new possibilities.

Director Peyton Reed concentrates on keeping things light – as he must. Along with the absurdity inherent in the idea of a superhero who can drive a Matchbox car, there's the fact that he commands a cheesy-looking army of animatronic ants. When off duty, he also hangs out with a bumbling trio of petty crooks played by fellow comics Michael Pena, David Dastmalchian and Tip "T.I." Harris. 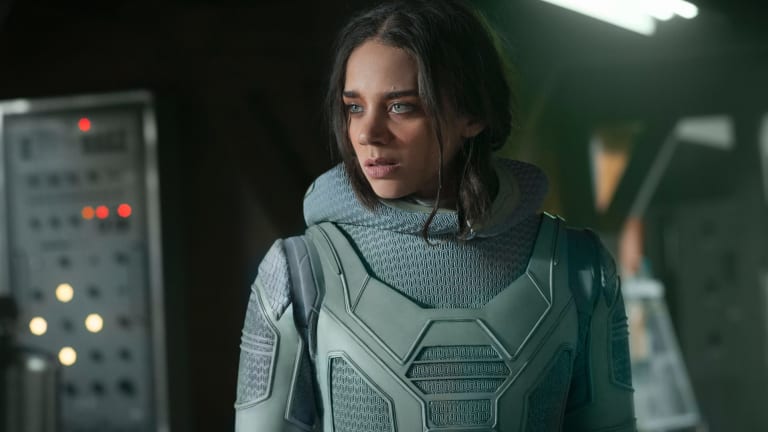 This image released by Marvel Studios shows Hannah John-Kamen in a scene from “Ant-Man and the Wasp.” (Disney/Marvel Studios via AP)

Randall Park gives them some fey competition as a ditzy FBI agent, but their Runyonesque routines contain the film's funniest lines with Dastmalchian, equipped with a towering quiff and a Russian accent, as the star of the ensemble.

Rudd co-wrote the script but it doesn't do his own comic gifts any favours. While he and Lilly show signs of developing a promising line in banter, they lose interest before it's properly under way.

Lilly's Wasp is a much more poised operator than her colleague, with no need of extra entomological back-up. Her performance is invested with a neat blend of elegance, irony and athletic confidence. And she has a better suit than Scott, as well as a superior intellect. He regards her with a heady mixture of lust, awe and profound gratitude as she extracts him from yet another misadventure.

But neither of them is a match for the film's newly introduced villain, Ghost (British actress Hannah John-Kamen), an angst-ridden mystery woman whose powers are mightiest of all.

Marvel movies have long since passed the point where the stunts can be seen as the main attraction. We've been watching people in Latex suits with CGI accessories battle for supremacy for so long that these days they have to possess something really original to stand out from the crowd.

The most recent example to meet this criterion was Black Panther, the first black superhero. Ant-Man isn't that kind of ground-breaker – despite the help he receives from Lilly. He gets by on his propensity for knockabout humour, his child-like enthusiasms and the company he keeps. He's likeable, his films are kid-friendly, and that's about it.