This Morning viewers have slammed Matthew Wright for suggesting he could think he was trans if he was growing up today as there are ‘trans ideas in the media’.

The TV personality appeared on Friday’s programme where he spoke with hosts Alison Hammond and Dermot O’Leary about the government’s double U-turn on conversion therapy.

Downing Street had first promised to bring in new legislation banning conversion therapy for LGBTQ+ people, but quietly shelved the proposal on Thursday.

Just hours later ,it was claimed the government backed down and would pass new legislation after all – however ITV’s Paul Brand revealed the element banning ‘therapies’ targeted at trans people would not make the law.

On Friday, This Morning discussed the controversial ‘therapies’ which aim to convince people that they are not gay or trans.

Matthew raised eyebrows on social media as he claimed that the more trans issues are spoken about, the more people may believe they are trans.

He said: ‘The more we put trans ideas in the media then it seems to be more likely that people may think that applies to them.

‘I’ve often thought about it myself,’ he added. 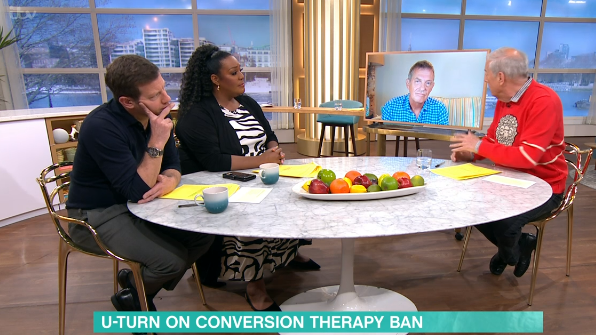 ‘I was a very effeminate teenager – I’m still quite an effeminate man now.

‘I wondered for a while if I was gay, and I wonder, now, if I went back to my teenage years would I be wondering if I was trans?’

He went on to say they were some ‘complicated questions for people who are going through a complicated period in their life, their teenage years.’

The former journalist insisted he wants to ‘try and understand the issue,’ adding: ‘I want young people who think they have issues to be understood as well.’

His comments proved controversial, with one viewer taking to social media accusing Matthew of ‘Section 28 thinking’.

Section 28 was a law introduced in 1988 under then-Prime Minister Margaret Thatcher, which banned the ‘promotion of homosexuality’ in schools, meaning that neither teachers nor students could talk openly about being gay, bisexual or transgender.

‘This is Section 28 thinking and it’s bigoted so get it off my tv,’ one outraged viewer said.

‘Omg did Matthew wright really just say if more pro trans media was out there more people would be trans,’ another said, adding: ‘it’s like 1967 .’

The presenter was praised by one viewer for what they called his ‘defusing’ the ‘crap opinions’ made elsewhere on the show.

They added: ‘Just let children explore. And what about adults living in turmoil with their gender dysphoria, on the edge of suicide every minute of every day.’