There are a lot of pressing questions as we approach the final episodes in Season 1 of “House of the Dragon”: Will Alicent and Rhaenyra kill each other? Is Helaena possessed? What ever happened to Mysaria?

But perhaps none of these is as critical as one: What the heck is wrong with Viserys (Paddy Considine)?

As the relatively unproblematic ruler of the seven kingdoms grows older, he is plagued by a litany of ailments, from good ol’ fashioned purulent wounds to fainting spells to what might be textbook consumption (pulmonary tuberculosis). In a world that recently lost its monarch, we can’t help but be nervous for the old king and wonder what fresh hell each episode has in store for him. Medically, this might all be one drawn-out problem, but if so — what is it? And how will it end?

And so, here is an exhaustive list of what plagues King Viserys, what it might mean, what happened to it, and what could be next — featuring second opinions from a licensed physician (a friend) who live-texts this reporter every Sunday.

“House of the Dragon” Episode 1 introduces Viserys, a conspicuously kind and level-headed leader who is obviously doomed, because this is Westeros. Sure enough, Viserys is sporting some kind of oozing, open sore on his back that he claims is from sitting on the Throne all day. It may or may not be related to greyscale from “Game of Thrones,” which was not only disgusting but terminal. Grand Maester Mellos (David Horovitch) scoops at the goop and sends it to the lab (or some such equivalent), and we also get a mention of “leeching.” Mellos’ assistant suggests cauterizing because the wound will otherwise not heal, but viewers are miraculously spared a scene of this process.

A second opinion: “I could believe one sore that turned into a poorly healing wound in a person with presumably not great nutrition or cleanliness. By this point I was mostly thinking how did he even get injured? Are they going to explain this? Then they bring in that close up where the Iron Throne nicks his finger — I thought he was for sure a goner from tetanus, but then he turns up in the previews for the next episode? Tetanus would have gotten him faster.”

Episode 2: Rotting of the Flesh 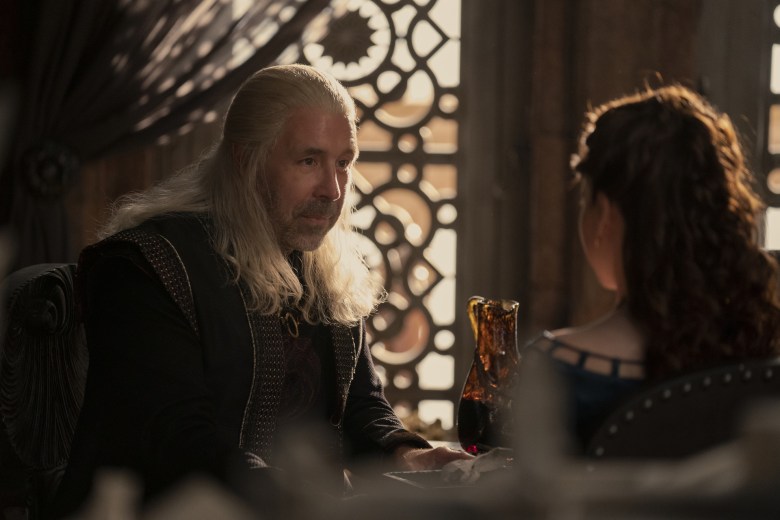 “House of the Dragon”

Leeches are out and maggots are in. In Episode 2, Viserys’ hand appears to be dying, a slow decay that makes for tasty maggot meals. Once maggots eat the rotten flesh, the infection should stop. At any rate, Viserys seems much more comfortable feeding his hand to tiny organisms than he was having his ooze inspected in the previous episode. Incidentally — what happened to the ooze and the back sore? Is the finger injury also supposed to be from sitting on the Iron Throne for too long?  If this show were any kind of realistic, Viserys would have developed a tailbone cyst.

A second opinion: “Leeches were a classic go-to in those ancient tales. Got some bad humors? Let’s see some leeches about it. The idea seems to be to pull out the infection, but you are draining blood and have no way to replace it. I guess beggars can’t be choosers when antibiotics didn’t exist. Anyway, this is clearly not a part of mainstream medicine. (Don’t hold me to this but in theory I believe leeches actually secrete something that prevents blood clots.)”

“I have no way to even pretend to explain why maggots, but since they’ll eat anything why not have them eat decaying king skin?”

From maggots to crabs, every creature on this show is feasting! Three years later, Viserys is in good spirits, now married to his employee’s daughter and father to a healthy son. He gets drunk — both in celebration and frustration at Rhaenyra’s resistance to marry, which leads to a mighty hangover worthy of his grace. Relatable King!

(He does also claim to be “drowning in a lake of parchment” because so many people are writing to the King with offers to wed Rhaenyra. The man has a way with words!)

A second opinion: “Alcohol definitely does not help wound healing. Liver disease can have esophageal varicies —> bleeding —> coughing up blood. Certain types of vasculitis can also have bleeding in the pulmonary system.”

Viserys is drunk again after his brother’s victory in the Stepstones and triumphant return to both King’s Landing and the family, but it is a short-lived euphoria. That very night, Daemon takes Rhaenyra to the pleasure den, where they are witnessed in action by Otto Hightower’s spies and soon become the torrid talk of the town. When word gets back to Viserys, he’s furious, beating his brother up in the Throne room and all but spitting on him for “ruining” Rhaenyra and disrespecting so many of the institutions Viserys holds dear.

“You are a plague sent to destroy me,” Viserys growls. Fetch the Grand Maester!

He’s also had enough of his “political headache” Rhaenyra putting off marriage, informing her that she will wed Laenor Velaryon without fuss. The final person pissing off King Viserys is his most trusted advisor Otto Hightower, whom he bodily accuses to his face of being conniving and selfish. Otto is fired on the spot, and someone better send a raven: The King is done with everyone’s bullshit.

A second opinion: “If Alicent didn’t catch whatever this is, Daemon isn’t gonna get it from Viserys’ frothy beat up. If the king is somehow trying to blame his leech dependence on the pressure of trying to manage Rhaenyra…no. Stress can do a lot of bad, but an entire arm?”

“We Light the Way” opens with Viserys vomiting over the side of a boat, which is not unique, but still unpleasant. He winces when Rhaenys takes his hand, answering her “Are you well?” with a deeply unconvincing “Very.” He carries around a handkerchief to cough into throughout the episode, though we are spared any sight of blood. Meanwhile, the maesters are once again back to leeching! This time it’s Viserys’ entire left forearm that’s rotting, and he’s exhausted from both his slow decay and the constant pretense that he’s fine.

He manages to get through most of Laenor and Rhaenyra’s wedding festivities without incident, before passing out spectacularly after the ceremony, vying with Alicent and Criston for who caused the most unnecessary drama at this wedding.

A second opinion: “Is he rotting? He isn’t not rotting. I have to assume this is not a dominant genetic problem all his white-haired spawn are okay, so if this was some sort of bacterial infection I have to presume it is not at all or not very contagious. His child bride has zero signs of this and wife 1 seemed fine also. Maybe some sort of vasculitis? Poor blood flow, inflammation —> things fall apart (off)? Maybe this is supposed to be Leprosy? But how is he the only one with this?! Maybe it’s a special strain of ancient Targaryen leprosy.” 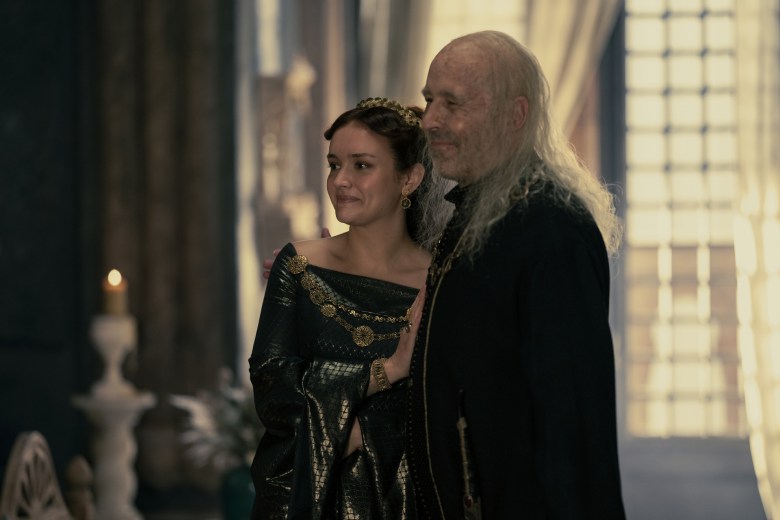 Viserys (Paddy Considine, right) is not doing so hot in “House of the Dragon.”

His Grace looks rough in “The Princess and the Queen,” set at least a decade after he passed tf out at his daughter’s wedding. Apparently that swoon was for nought, as Viserys clearly survived — but time has not been kind to him. The king is probably not more than 50 or 60 (he’s significantly younger in the book, but Considine is 49), but his hair is thinning and his skin covered in age spots that make him look closer to his 80s (it’s also peeling, which makes perfect sense because the last thing on anyone’s mind in Westeros is SPF). He’s also showing signs of delusion bordering on dementia — or he actually believes that Alicent might consider Rhaenyra’s proposal to marry their children and broker peace in the realm. Ok Boomer!!

A second opinion: “Absolutely jaw dropping, unreal reveal. A whole arm?! Really?? All the leeches in the land could not handle that.”

The main thing Viserys is made to suffer in Episode 7 is foolishness. He’s not out of the woods with dementia — he accidentally calls Alicent by his first wife’s name — but the actions of his wife, children, and grandchildren forces him to be the adult in the room. Any and all medical attention this episode is directed at Aemond and Rhaenyra and their knife wounds, and the episode ends with Viserys bundled up in blankets and looking forward to a glass of wine before bed. Same, buddy.

A second opinion: “Maybe all their wounds aren’t healing because they are free stitching wounds with dirty hands and needles.”

This is no spoiler: Viserys I can’t live forever. He will eventually die, and one assumes that his daughter and wife will probably murder each other, maybe over his dead body. Trailers for Episode 8 show a bedridden Viserys and Otto Hightower sitting on the Iron Throne, running the kingdom in his place. The question of the king’s death is not if but when — and who will actually sit upon the throne after him.