[Editor’s Note: The following review contains spoilers for “All of Us Are Dead” Episode 12, including the ending.]

Zombies are frightening abstract concepts for any number of reasons. They can represent a loss of control or a threat to the fundamental trust we can have for one another. Maybe the most terrifying part of a majority of these stories is that zombies are presented as a clear binary. You either are one or you aren’t. Pull up your sleeve to reveal a few stray tooth marks and it’s just a matter of time before you flip over from one category to the other, forever.

While “All of Us Are Dead” isn’t exactly brimming with challenges to zombie conventions, one notable exception is in the character of Nam-ra (Cho Yi-hyun). The reluctant Hyosan High School class president ends up as part of a small group of survivors, plotting their survival while a mysterious virus overtakes nearly everyone else outside. Through a strange mutation, Nam-ra suffers a bite but manages to stave off turning into something non-human. The group, still wary, decides to keep her around rather than cast her out to an uncertain fate.

It takes the better part of 12 hours to get there, but in its final 20 minutes, “All of Us Are Dead” finally pays off that idea. The predatory zombies have been vanquished, reduced by an explosive attack that clears the way for special ops teams to section off “safe” areas of Hyosan. A time jump finds the surviving students crossing paths again in the Hyosan quarantine camp, being forced to remember choices they made throughout the outbreak. During an an impromptu reunion on the rooftop of the husk of what once was their high school, they stumble on a familiar face in Nam-ra, who ran away from the group during their escape through the city.

When Nam-ra (very didactically) explains to her former classmates that her existence as both zombie and human is pretty much the same as being both a kid and an adult, it finally embraces the deeper thematic ideas the show was fine to skirt for most of the previous 12 hours. It’s also a moment strong enough to make you wish that this didn’t feel like a tacked-on “where are they now” epilogue. If it turns out that this is some kind of narrative springboard to a potential Season 2, those future episodes would already be on better footing than their predecessors. No longer getting stuck in a fight-or-flight cycle, these former students would have a chance to actually process a changed world instead of existing as a series of reactions to an immediate crisis. The intricate execution of the zombie spread is an impressive one, but once that threat consumed Hyosan, the aftermath was always going to be more interesting than whatever came in between. 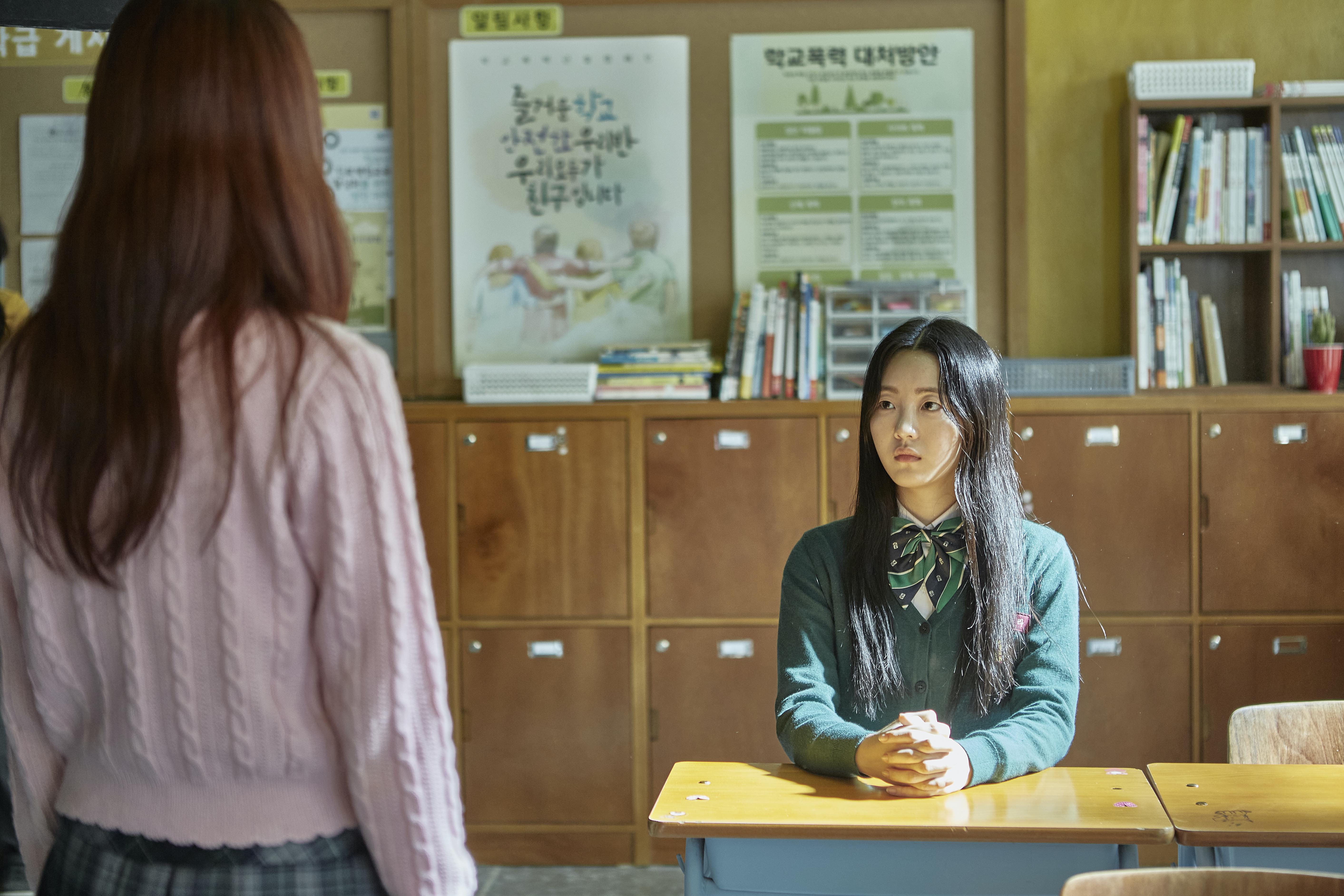 “All of Us Are Dead”

Up to the ending, “All of Us Are Dead” is fine coasting on what makes zombies fundamentally frightening and what makes soapy high school crushes audience catnip. As the school is under assault during the bulk of the season’s second half, Su-hyeok (Lomon) becomes a devoted partner, quite literally overnight, helping Nam-ra control her newfound hunger and repeatedly offering himself up for her benefit. Much like the rest of “All of Us Are Dead,” there’s so much attention focused on the “now” that survival and love don’t end up leaving much room for anything else. If anything, Nam-ra’s eventual contributions as the group’s unofficial zombie sonar makes her more of a functional piece than a person.

Still, the show at least raises some of the complications that Nam-ra faces. With the bully-turned-Terminator Gwi-nam (Yoo In-soo) — the only other prominent, extended example of someone being bitten and not fully zombified — the show seems content to use him as a blunt instrument of id-driven revenge. Gwi-nam’s “revenge at all cost” mentality is probably a better reflection of the season’s overall approach, to relentlessly trap these high-schoolers to the point where any attention elsewhere (a police officer, a soldier, a government official) feels like a relief. There’s maybe a sliver of dark comedy to seeing Gwi-nam lumber up flights of stairs and then tossed off the edge of a building, only to repeat the process a handful more times. Still, his is not exactly a nuanced, introspective journey.

Nam-ra and Gwi-nam’s parts of “All of Us Are Dead” get at what the show is actively having to work against. The swarms of ravenous bodies and the tangles of flailing limbs — those all make for good trailer fodder and a grabby main menu thumbnail. But as a bevy of recent series have proven, the “post-” is usually far more compelling than the “apocalyptic.” The piles of bodies are certainly harrowing and the chaos of watching the world crumble can certainly be operatic. Looking at what happens immediately after everything changes (the incredible airport episode of “Station Eleven”) or in the years after things have settled down (basically where things are at the start of the Hulu show “Creamerie”) often present a richer way to look at how a fictional populace responds to a crisis.

Zombies are never just zombies, and the closest that “All of Us Are Dead” gets to anything allegorical is in the video diaries of Mr. Lee (Kim Byung-chul), the science teacher who unleashed the virus in the first place. His muddled justification for his experiments (highly ill-advised, much less unethical) revolve around the idea of fear. Creating a new brand of humans impervious to emotions is just what zombies are, though. Otherwise, the show seems content to transpose the familiar ins and outs of high-school drama — unrequited crushes, extreme professions of love, anxieties over diverging post-graduation choices — and add a battalion of flesh-hungry monsters on top for good measure. 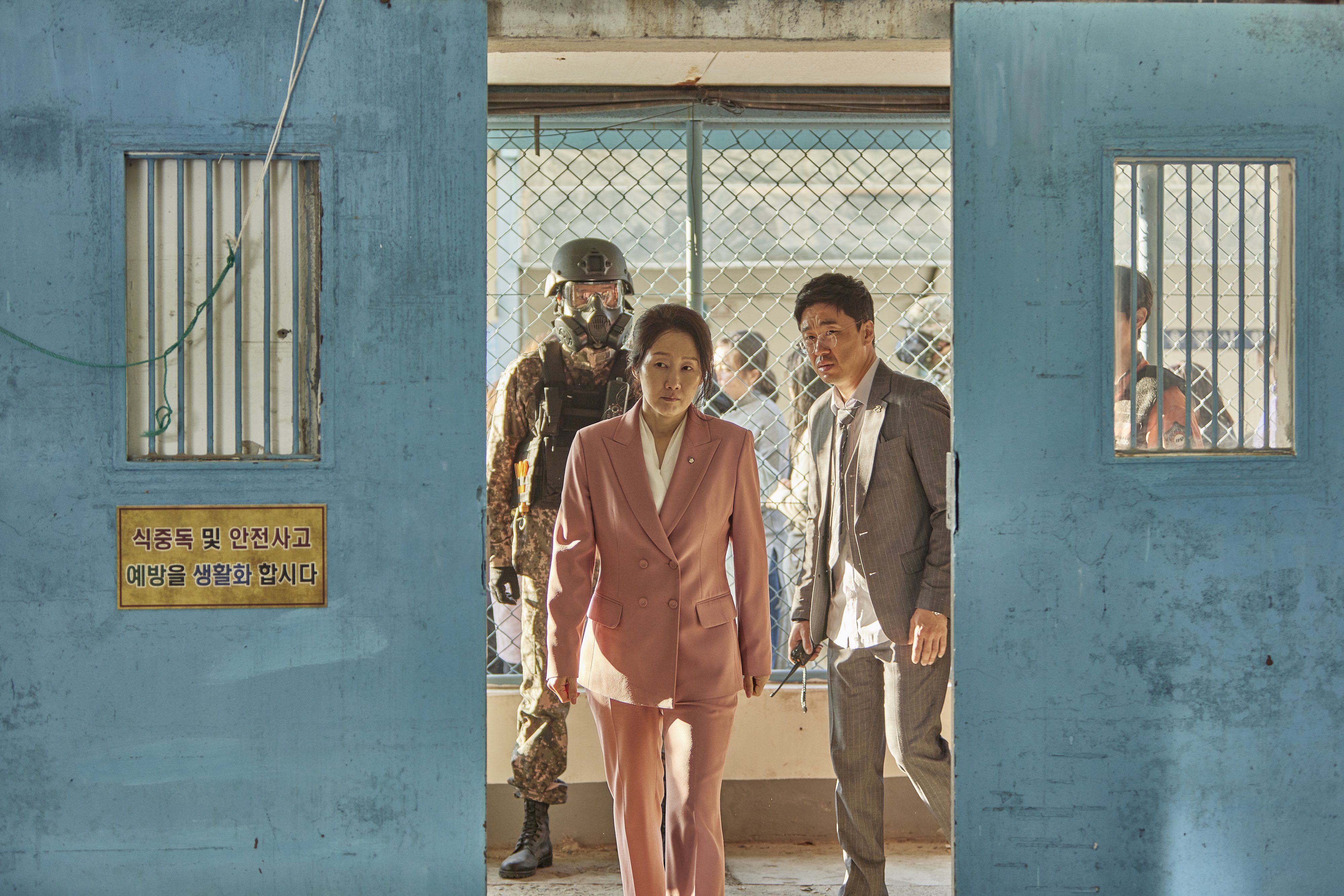 “All of Us Are Dead”

You could argue that the very act of trying to survive a throng of unthinking, unfeeling teenagers already put the rest of them at that kid/adult border. Here, though, with Nam-ra and the collection of other zombie inbetweeners hinted at off-screen (that we didn’t see any of them this season makes all the wasted attention on Gwi-nam seem even more like narrative malpractice), there’s room for a Season 2 to address that feeling of not belonging in a more meaningful way. That’s a far more effective use of a runtime than yet another zombie story overly concerned with characters trying to puzzle out a cure or figure out how the virus incubates (circular paths that this season takes, regardless of which groups happen to be are on screen).

It’s presented as a quick wrap up to her storyline, but Mi-jin’s (Lee Eun-saem) sandwich board message demanding university admittance for the survivors of Hyosan High School touches on another part of why the “All of Us Are Dead” aftermath deserves more attention. Our current pandemic (it’s worth noting that “All of Us Are Dead” does make one passing reference to Covid, but not nearly as many as it does to “Train to Busan”) has renewed questions about what we owe to the most vulnerable in times of crisis. Setting aside the finale’s implicit message that you can’t make a public safety omelette without breaking a few missiles aimed at packed city centers, it’s interesting to see what these students retain of their experience when they get some distance. This ending offers them the perspective that their claustrophobic time in rehearsal rooms and gyms and cafeterias rarely did. The idea of having gotten through the worst of something, only to realize that society has transformed as a result, is a potent and present one.

The tiny glimpses in this epilogue naturally raise a new wave of questions about this world: How does the local and national mood change after a collective episode like this? Will a sect of zombie truthers campaign against the idea that all this damage could be inflicted by one person? How long do these quarantine camps stay in effect? Are there military tribunals? Gaming out the logical next steps from the unthinkable is something that made “Hellbound” a far more affecting experience. In that series from last year (also a Netflix title), individuals are announced as sinners before being summarily destroyed by beasts from a mysterious realm. On its face, the threat itself looks more absurd — having a trio of ashen-colored Hulks beat the snot out of someone and then fry them with hellfire laser beams doesn’t have the same innate visceral power that a mass of single-minded zombies does. Yet, as with so many of these tales, it’s the human response to the monstrous threat that adds the insight to the spectacle.

Whether this week’s Top 10 report is a smoke screen or the show is actually that popular, Netflix probably wants some version of an “All of Us Are Dead” Season 2. Maybe it goes the anthology route and adapts the original “Now at Our School” webtoon for a different location. The idea that all you need is one person to slip away undetected and start a completely new outbreak — something underlined in the scene where the military is being briefed on potential spread — might mean that Season 2 could follow the same pattern, only in a different nearby Korean city. We could even get an entire season with more found footage from live-streaming vloggers. But if there’s more to come that centers around the same group of former Hyosan High School students, there’s already a helpful roadmap for where to head next.

“All of Us Are Dead” is now available to stream on Netflix.