If you're looking for something to do after a morning of Anzac Day commemorations why not settle in on the lounge with a good war movie. Here's a list of 10, in no particalar order, and we'd love to hear what your favourites are too. 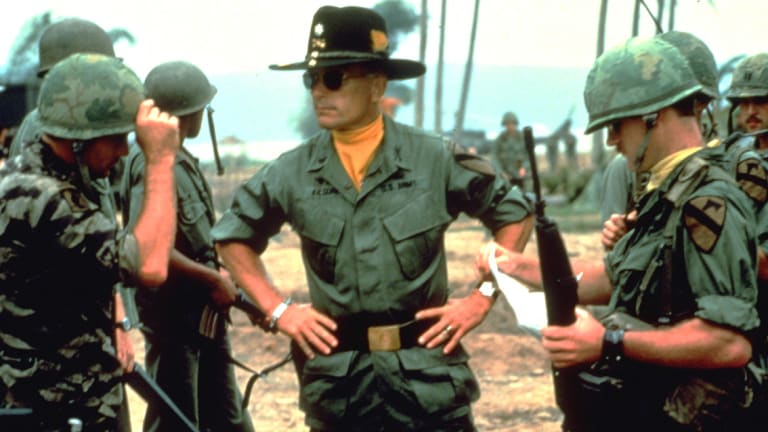 Robert Duvall in Apocalypse Now, one of the best war films ever made

Set in the final days of World War II, David Ayer’s film portrays US tank crews making a push into Germany. Starring Brad Pitt and Shia LeBeouf, Fury puts you right inside the Sherman tank. It’s violent and full of moral ambiguity and Pitt’s performance is a stand out. Ten working tanks were used on set and it’s a fascinating insight into armored warfare.

Oliver Stone was a Vietnam veteran himself and went on to win Best Picture at the 1986 Oscars for this harrowing film. Starring Willem Dafoe and Charlie Sheen in an all-star cast, Platoon held nothing back. It’s a study of leadership, what makes a leader, and how personal choices during war are never black and white. I remember watching the cinematic release of this with some young men enrolled at RMC and they were left dazed.

Another Best Picture Oscar winner, Kathryn Bigelow also became the first woman to win Best Director. While criticised by some Iraq veterans, The Hurt Locker was intense, intelligent and Jeremy Renner’s complex portrayal of a bomb disposal soldier was highly praised. Bigelow’s Zero Dark Thirty, about the hunt for Osama Bin Laden, is also worth a look.

Based on a real life escape from a German POW camp, this film has an all star cast who you’re rooting for from the minute they start digging the first tunnel. From Charles Bronson's claustrophobia to Steve McQueen’s iconic fence jump on the Triumph TR6 Trophy motorbike, The Great Escape is just that. While 55 years old the film still wins over audiences for it "Boy's Own" appeal.

Francis Ford Coppola’s epic film is memorable not only for its depiction of the Vietnam experience but just as much for what went wrong while they were shooting the film. From an overweight Marlon Brando, to lead actor Martin Sheen having a breakdown on set, Apocalypse Now pushed the boundaries on and off set. “The horror .. the horror…” just about sums the whole thing up.

Based loosely on the experience of the prisoners of war who built the Burma Railway, this film won seven Academy Awards including Best Picture. Alec Guiness is the British POW commander tasked with getting his men to build the towering bridge, giving them some focus, but he’s oblivious to Allied plans to destroy it. The futility of it all evident in the final scenes as Nicholson realises the truth. Everyone whistle now.

Best include a few Australian films here. Starring Mel Gibson and Mark Lee, Peter Weir’s movie provides a faithful portrayal of the lead-up to the battle on April 25. It’s a coming of age film, for the soldiers and perhaps our nation. Also worth a look are Breaker Morant, The Odd Angry Shot, The Lighthorsemen and Beneath Hill 60.

I’m a sucker for a good ensemble cast and this was one of my father’s favourite films. Lee Marvin is tasked with bringing together a bunch of rat bags and leading them on a virtual suicide mission against some high-ranking Germans. With great performances from Telly Savalas, Donald Sutherland and Charles Bronson, The Dirty Dozen was a commercial success but reviewers were critical of its portrayal of American soldiers who didn't fit the stereotype.

Ridley Scott’s film loosely chronicled the 1993 raid in Mogadishu, Somalia, and is memorable for taking you into the heart of the action. While there’s not much character development, there’s a great cast with Josh Hartnett, Ewan McGregor, Eric Bana and Tom Sizemore. What sticks about Blackhawk Down are the scenes when the Americans are confronted by machete wielding enemies and the courage shown by the team under fire.

Steven Spielberg’s epic film is almost three hours long but you’re along for the entire ride. The opening 27 minutes on Omaha Beach during the Normandy landings received widespread acclaim as one of the most realistic battle scenes ever shot. Tom Hanks leads a great cast, with Matt Damon, Tom Sizemore, Ed Burns and Vin Diesel, as they go in search of a soldier who is the last surviving brother of four. Everyone needs to watch this film.