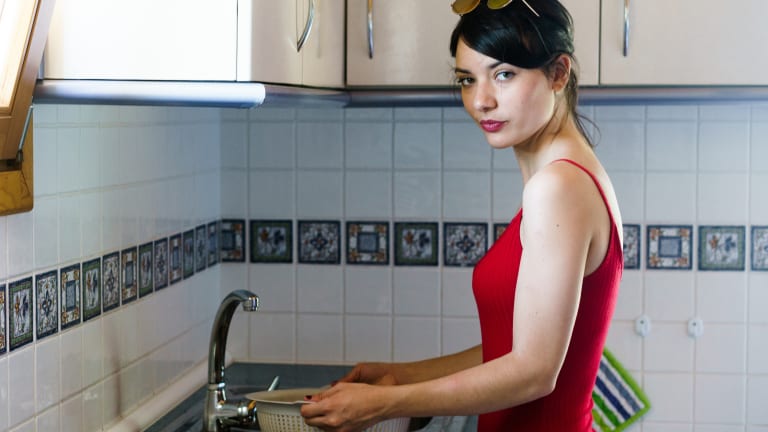 In 1988, Marilyn Waring published her seminal feminist text, Counting For Nothing: What Men Value and What Women Are Worth. It was Waring’s response to the fact women’s unpaid work, from domestic labour to child-rearing, to care of the elderly and sick, had historically been excluded from the United Nations System of National Accounts.

Her research led her to this infuriating little tidbit (from 1953), that women’s unpaid labour was “of little or no importance”, and this was the reason for its exclusion from the System of National Accounts.

When author Anne Manne asked Waring how she’d felt on reading those words for the first time. “Oh terrible,” she replied. “I wept.”

Even today, the System of National Accounts doesn’t include the cost of unpaid labour alongside its measure of Gross Domestic Product. Instead, there’s a provision for satellite accounts that allow it to be measured alongside it – an improvement, sure, but still a reflection on how the work of women is made peripheral to global economic outlooks.

As Manne writes in the Waring profile, “An Australian Bureau of Statistics study in 2014 revealed that unpaid work in Australia was worth $434 billion, equivalent to 43.5 per cent of GDP.”

But women do it for the love, we’re told, as if love will pay our bills and feed our children and take care of us in our old age.

In fact, one of the most significant impacts of gender inequality is the poverty faced by aging women whose lifetime of unpaid work has earned them no superannuation or similar retirement funds. The fastest growing group of homeless people in Australia are women over the age of 65 – the same women who  supported men as they established their careers, gave birth to their children and devoted their time to caring for them.

These are the women who were then frozen out of the workforce by a perceived "lack" of suitable skills. Even now, 50 years after Waring first started reading the System of National Accounts, unpaid labour is still framed as “women’s work” and it’s still dismissed and joked about as “of little or no importance”.

In the toxic dumpster fire that is our patriarchal world, women are still expected to be the best and most capable of assuming caregiving roles, like being teachers, childcare workers, nurses and wives. It’s surely just a very interesting coincidence that these roles are often underpaid, undermined and underappreciated.

When social conditioning also instructs us to believe women do these jobs because a) we’re just better at them and b) we love them so much we would do them for free, it becomes even easier to ignore the huge responsibility they actually represent, not to mention to dismiss the massive favour women do to society in general by relieving it of the responsibility of that burden.

Until Australian culture embraces a more equitable division of labour in its predominantly heterosexual homes, the broader economic burden relieved by women working within them will continue to be undermined and dismissed. Meanwhile, children being raised in these homes will be socialised to repeat the same patterns of inequality which in turn informs a more general (and sexist) view of men and women.

We should look to examples like Sweden, where both parents are entitled to 480 days of paid parental leave after the arrival of a child.

For just over a year, primary parents on official leave are paid nearly 80 per cent of their wage, with the remaining 90 days paid at a flat rate. Parents are also allowed to reduce their working hours by up to 25 per cent up until the child turns 8.

In Sweden, each parent is entitled to 240 days of that 480 days paid leave, with 90 days reserved exclusively for them. A parent can give approximately two thirds of their entitlement to the other parent, but that 90-day reserve is non-transferable. What this means is that in your basic heterosexual relationship, men are supported to take at least 90 days out of work to be the primary carer for their kid or kids while the mum goes back to work. And in Sweden, the men do exactly that. And yes, the income tax is high but the cost of funding a community and ALL of its members is one we should consider worth it.

Imagine if we had a similar model of care here in Australia. Not only does it provide essential one on one time between fathers and children that helps foster a deeper bond but it also teaches those children from a really young age that they can rely on their father for physical care, compassion and nurturing just as much as they do their mothers.

The lessons taught to boys and girls about who does what in the home are inextricably linked to the roles they feel entitled to assume later on. What is made easy for boys to "get away with" might not seem like that big a deal when you’re talking about a five year old, but it becomes a much larger deal when that five year old becomes a grown man with expectations of what the world either owes him or will allow him to escape punishment for.

When there are teenage boys who still sleazily demand that girls and women “get back in the kitchen” to “make me a sandwich” as a means of putting those girls and women in their proper place, then we are still battling against a deeply embedded, learned culture of sexism.

Clementine Ford will speak at The Motherload, together with Dr Rebecca Huntley and Maxine Beneba Clarke, at the Sydney Opera House on Sunday 20 May.